Biden Finally Finds A Border To Secure … In Tajikistan

Biden Finally Finds A Border To Secure … In Tajikistan

Rep. Paul Gosar: “So we are clear: your tax money is spent building a wall and securing the border in Tajikistan” 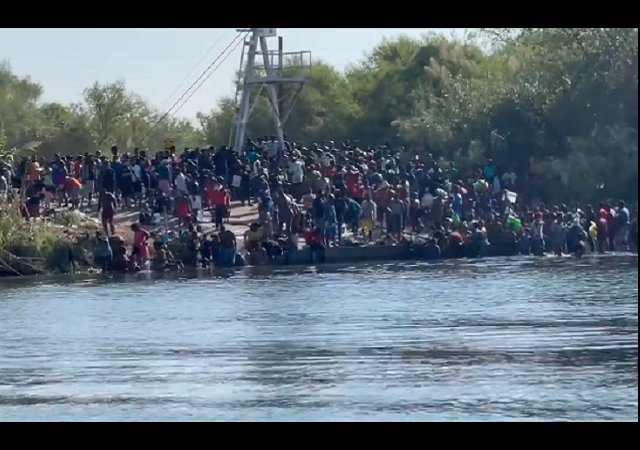 Our own border is an absolute nightmare and a full-blown humanitarian crisis, but the Biden administration ignores it, even going so far as to attempt to prevent journalists reporting on the horror.  They have, however, found a border that they think worthy of American taxpayer dollars . . . in Tajikistan, a former Soviet republic that has zero interest in floods of Afghan refugees crossing their border.

Earlier this week, Mary blogged about the shameful state of our own Southern border.  The Biden administration apparently didn’t like the drone footage of thousands of illegal aliens crossing the border and then huddled under various bridges, so the FAA declared the area a no-drone zone.  Because national security.

An intrepid Fox News reporter, an actual journalist named Bill Melugin, took troopers from Texas Department of Public Safety up on their offer of a helicopter ride to survey the disaster.

AMAZING — Since the Biden administration has kicked @BillFoxLA and his team out from flying Fox News's drones along the U.S./Mexico border in Del Rio, TX, *local* law enforcement decided to get him a helicopter to hop in and go check things out to continue reporting. pic.twitter.com/pZ54my6E7o

.@BillFOXLA on what Joe Biden DOESN'T want you to see: Border Patrol sources "tell me that this situation is 'out-of-control.' They need help. They say there aren't even enough porta-potties or food or anything…It looks like a large refugee camp." pic.twitter.com/UtCuVGxBpv

This was so newsworthy that the legacy and even the leftist media covered it. The Streisand effect was too much for this teetering administration, and within the day, the FAA had backtracked. Apparently, the national security threat posed by drones was magically over once it wasn’t only those anti-vax MAGA knuckle-draggers who watch Fox News seeing the dire situation at the border.

. @FoxNews applied this morning and has received clearance to operate from now until the end of September in the restricted airspace linked below.

Melugin was back at the border Saturday, this time in a boat on the Rio Grande.

BREAKING: I am absolutely stunned by what I’m witnessing right now. We are on a boat in the Rio Grande near the Del Rio international bridge and we are watching as masses of hundreds of migrants walk across the river from Mexico and stream into the US illegally. @FoxNews pic.twitter.com/xXE4pDkpIe

NEW: TX Congressman Tony Gonzales says food shortages are beginning at Del Rio grocery stores and that some local restaurants have been asked to close early and make food for the migrant camp underneath the international bridge, where nearly 15,000 migrants are camped. @FoxNews

While the border situation in this country becomes more and more dangerous by the day, the Biden admin is laser-focused on the border . . . in Tajikistan.

While the Biden administration halted construction of the border wall along the U.S.-Mexico border, the United States is funding border security efforts for Tajikistan, a former Soviet republic trying to keep Afghan insurgents and refugees out.

One day after the Biden administration’s Aug. 31 deadline to withdraw from Afghanistan, the U.S. Embassy in Dushanbe, Tajikistan, announced that it had launched a project to construct new facilities for a Border Guard Detachment in Ayvoj, along the Tajik-Afghan-Uzbek border.

That facility is designed to help Tajik security forces better respond to Afghans seeking to flee Taliban rule or insurgents seeking to cause mischief to its neighbor.

While the announcement was largely overlooked by the U.S. media, Rep. Paul Gosar (R-Ariz.) warned in August that it was “preposterous” for American tax dollars to be spent securing a foreign country’s border while the U.S. southern border remained wide open.

. . . . “So we are clear: your tax money is spent building a wall and securing the border in Tajikistan and hydro-power in Afghanistan, but our borders are open and the last large hydro power plant built by Army Corp of Engineers in U.S. was in 1979,” Gosar said.

So if we tell @JoeBiden that our border is #Tajikistan, will be secure it? https://t.co/e8yrrab2d2

Gosar is such a mensch. We’re really proud of him out here.
There should be 434 more like him in the House.

The mention of a secure boarder reminds me of how well the secret service guarded Obama’s mother-in-law when she lodged in the white house at tax payer’s expense for 8 years.

Nice pun, but she did not lodge at taxpayers’ expense, any more than the rest of 0bama’s family did, or than any president’s family does.

Presidents and their families don’t have to pay rent for the White House, but that’s not a cost to the taxpayers; it’s not as if it would otherwise be rented out to someone. Maintaining the place costs the same whether there are ten people living there or only one. Even if it were empty it would still have to be kept up, and the cost would be about the same.

But they do not get free food, laundry, or anything else. So they do not live at taxpayers’ expense.

A president and his immediate family do get security at taxpayer expense, and that is right and proper, since the only reason they are in danger in the first place is the president’s service. Remember all the complaints about the Trumps’ security costing so much more than the 0bamas’ did, because there are so many more of them, and because they’re older and have families of their own? As if it were some sort of crime to have children, or for those children to have lives? Well, that’s what complaining about Mrs Robinson’s security sounds like.

So you’re saying that the President and all guests get a bill for each meal that they eat at the White House? Wow, I’ll bet the ice cream bill is taking up most of Joe’s $450000 salary!

No, of course guests don’t get billed; they’re the president’s guests, so he gets the bill. Yes, the president is billed for all private meals eaten in the private residence, by him, his family, and his guests. He doesn’t get billed for things like state dinners, which are official functions. And they’re not billed at what a normal family would pay to maintain itself, buying on sale or at Costco, etc.; they’re billed like restaurant meals, albeit a fairly inexpensive restaurant.

He is also billed for all other expenses, such as laundry. Again, not at what it would cost a normal family to go down to the laundromat, but more like what a cheapish hotel might charge. The only thing the president he’s not charged for is rent.

That’s why the attempted kerfuffle about Trump taking two scoops of ice cream was so stupid. It was his ice cream, he was paying for it, why the hell shouldn’t he have had two scoops if he liked?

Oh good, more Afgans for US to take is my guess.

It goes along with Biden’s America last policy as symbolized in his slogan “Build Back Better in Tajikistan.”

HOW LONG WILL AMERICAN ALLOW THEMSELEVES TO BE PLAYED FOR FOOLS ?

Even Democrats are now realizing they got fooled by the DNC. Many now saying out loud that they did not vote for Biden – they vote against Trump. They never wanted Biden.

I remember talking with a Dem friend of mine (a woman in NYC) who said she would vote for serial killer Jeffrey Dahlmer if he was on the ballot vs Trump. She still believes the DNC propaganda that Trump colluded with Russia. I told her that she would lose all right to complain later with such a voting plan.

THE POINT – You know Dems are in trouble when they start to lose the brainless low-info voters. The one’s who don’t care who’s running and just vote D.

Note that there’s nothing wrong with helping an ally secure its border, or building hydro power plants in a country that needs them. That part is laudable, and Trump would have done the same. The problem is that Biden refuses to do either of those things for us.

And some wonder why his ratings are so high?

Biden is an idiot. But he’s not making these decisions. Susan Rice is.