“FOX40 reached out to the Department of Defense, which did not want to do an interview” 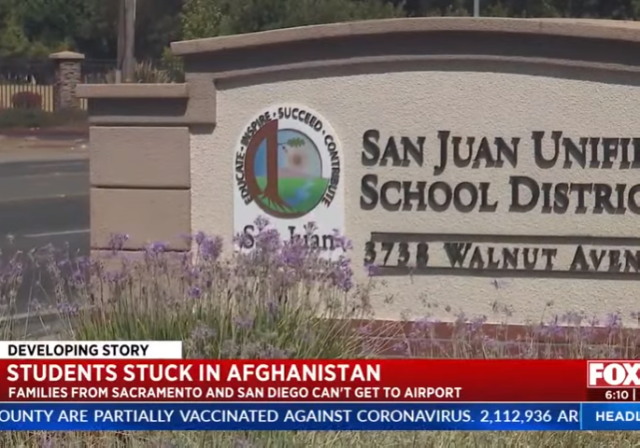 As many as 29 students from Sacramento, California, remain trapped in Afghanistan. This has been known since at least the date of the August 31 deadline, but hasn’t gotten much notice in national media for reasons which should be obvious.

Biden left children behind in Afghanistan. This should be a permanent stain on his record.

Just days after 13 U.S. service members were killed in an attack in Kabul, the San Juan Unified School District says they are doing everything they can to try to get more than two dozen of their students out of Afghanistan.

With about 1,400 students of Afghan origin within the district, Bassanelli said it’s normal for these students to go visit their home country every summer.

And this year was no exception, especially as the situation in Afghanistan started to become more tense.

“We realized that we had about 144 students of Afghan origin who were not presently in our schools but yet enrolled,” Bassanelli explained…

FOX40 reached out to the Department of Defense, which did not want to do an interview, instead referring to what President Joe Biden said this week regarding those left behind.

“There is no deadline. We remain committed to get them out if they want to come out,” President Biden said.

This is an absolute disgrace.

Why hasn’t Jen Psaki been asked about this every single day?

Where are the people who shrieked about kids in cages for months?

Isn’t the idea of kids trapped in Afghanistan, surrounded by armed members of the Taliban much worse?

“With about 1,400 students of Afghan origin within the district, Bassanelli said it’s normal for these students to go visit their home country every summer.”

This is a nation of immigrants. If every immigrant went to visit their home country every year there wouldn’t be enough airplanes in the whole world to take them back and forth.

And have you looked at round trip prices to Afghanistan? Where in the hell are they getting that kind of money from? I can’t afford to go to Florida every year much less halfway around the world.

It’s called prioritizing. Some people think it is important to visit their home country and budget accordingly.

Ok. Fair enough. My response to that is simple. Someone from Afghanistan being granted status in the USA as a legal permanent resident is equivalent to winning the lottery. They squandered that just like many lottery winners do.

There’s a reason they left Afghanistan. Travel back to a war ravaged area is not prudent. Adults can make choices but frankly they need to be willing to accept the role inherent in those choices.

But what if we just took them back? Are there enough planes for that?

My mother did not go back to her country after WW2 (Latvia) and most of her family went to Australia and New Zealand, never to return. They did not want to be under Soviet control.

While I can understand the desire to visit relatives, we relied on letters, phone calls, and the limited visits to US or AUS/NZ. Now, there are many digital ways to visit, so why did they take the chance to travel into a wartime situation?

A better use of their efforts would be to get the relatives to visit the US. Under the current lack of control, the relative could have easily just disappear in the bushes, never to be found again.

My second cousin tried to get into the US to continue some training but was denied, despite my parents attempts to sponsor him. Our loss – he went back to NZ and became a physician.

Can they leave if they wish? No? Then they are not “stuck” (to use NBC’s dishonest phrase). They are hostages.

What does a school district have to do with this? Private kids during the Summer. Stick with not doing what you should be doing.

The school district is just how they know the kids are missing.

Personally I tend to come down on the side of “WTF were you doing in a war zone in the first place”. If they can safely travel back to their home country they’re no longer refugees and are not the US’ concern.

Noticeably missing from the new reports is the word “citizens”.

Well, just so long as they aren’t stranded….

This just in: Kroger Corporation working to get shoppers out of Afghanistan. 76 American Kroger shoppers have been identified in that war torn country, and Kroger is working to get them out of there. “We realized that we had about 76 shoppers of Afghan origin who were not presently in our grocery stores but were still receiving our weekly coupon mailer,” a company spokesman explained…

You sized it up very well. It had nothing to do with school. They kids went with their own parents. Different families went at different at times to different places and the kids were from different schools.