Yeah, Biden. The Afghanistan withdrawal is a total success even though we left behind so many Americans. 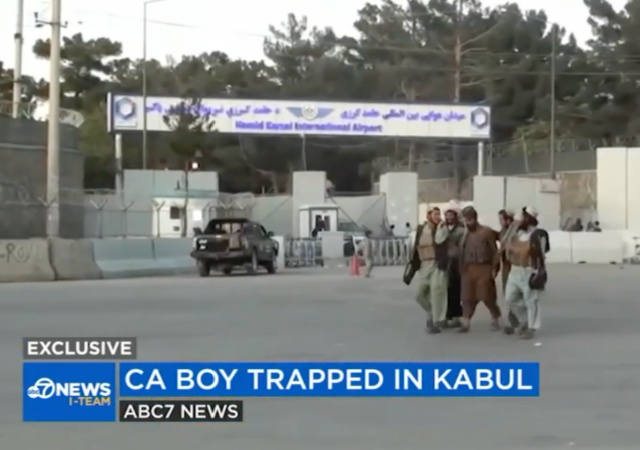 The San Juan Unified school district in Sacramento, California, confirmed at least 24 students are still stranded in Afghanistan. This is down from the 150 the district discovered were in the country after the students kept missing school.

ABC7 San Francisco also reported a 3-year-old boy is still in Afghanistan with his family. They are also residents of Sacramento.

We Left Behind Small Children

The toddler has an American passport. His family members are permanent U.S. residents.

California Rep. Jackie Speier and her staff tried to help the family out of Afghanistan. She provided a letter that gave the family permission to safely pass through the Kabul airport and come home.

That did not happen:

Armed with that letter, the boy, his father and several other family members approached the airport, but the Taliban attacked.
Brown said, “And they were stopped by a Taliban checkpoint, and they received physical beatings at the gate and they were pushed back where they had to flee and return to a safe house.”

ABC Bay Area learned the family and the boy decided to make a move after meeting with other Americans who want to leave Afghanistan “without the normal channels of the U.S. government, in the chaos that we left behind.”

The district pulled attendance records and identified about 150 students who might be affected by the turmoil — an almost certain overcount that might also include students who simply transferred to another district.

“We are trying to determine why these students haven’t been at school,” Raj Rai, a spokeswoman with the district, wrote this week. “Anecdotally we have heard that some may be in Afghanistan, but we do not have a concrete number at this point.”

Rai said students from Mira Loma High School are among those attempting to return.

A 9-year-old and 15-year-old with their mother went to Afghanistan to be with their father as he died from cancer.

Their older sister is trying to get them home. They are staying at a relative’s home in Kabul. They could not make it to the airport.

I guess his parents are the wrong nationality for the Democrats to call him an anchor baby. Too bad his parents were not Mexican nor Chinese.

Or Guatemalan or Salvadoran or…

Cynic. … Gavin with Nancy’s connections are organizing a family operation with the Squad of Four as the chief negotiators, and the Queen in Psaki’s office as operations coordinator, the CGN has arranged for the Bills, Panetas, Bob Menedez and select other demonrats to be onboard the former Epstein Lolita Express. Top secret – their bringing “pizza”.

That 3 year old boy had it coming. He probably just didn’t want to leave or wanted to sabotage Biden’s presidency because he’s a filthy Republican.

Even worse, a white Christian.

Imagine the problems for young girls stranded in Kabul after the US left. Not good.

They’ll be married off to a Taliban fighter within a few weeks.

“I raise my flags, don my clothes
It’s a revolution, I suppose
We’ll paint it red to fit right in

I’m breaking in, shaping up, then checking out on the prison bus
This is it, the apocalypse

I hold what is likely an unpopular opinion on this. That 3 year old has zero business being in Afghanistan. He was born in the US. He is a US Citizen. I can understand the desire of his Green Card holding parents to return to Afghanistan to visit family. I don’t understand acting on that desire. It was totally irresponsible.

These parents placed their 3 year old into an incredibly dangerous situation for what were, IMO, entirely selfish reasons which discounted and compromised his safety.

None of that means we shouldn’t make efforts to keep them safe, get them out and keep working until it’s done.

While I disagree a little with the “entirely selfish reasons” bit, this is one of the things I’ve been pointing out for a while. Not all the “Americans” listed as left behind are actually citizens. They are Afghans who traveled to the country which they, at some point, fled. They were given some kind of resident status here is all. Some large number of refugees here never bother to become citizens.

A great many people in that sort of situation traveled to Afghanistan, it seems, confident in our presence there that the world was perfectly safe now.

My wife and I sacrificed a great deal to place the best interests of out Daughter above our own personal desires. Both of us chose to forgo opportunities professionally, educationally and monetarily because those alternatives would have negatively impacted our Daughter.

I was medically retired due to injuries sustained by choosing to stay in the Army and deploy twice more instead of accepting a very generous above 6 figure salary in the private sector. My wife left AD and went into the reserves a few years short of her 20. That definitely impacted us financially.

We made that decision because our Daughter needed the stability of staying in place and having one of us at home. Previously we had been deployed offset of each other back to back to back in three duty locations. It wasn’t healthy for our Daughter’s development and emotional stability.

And the only reason I would argue against that statement is they were going to see an elderly parent they might never see again. But I get what you’re saying. (And why I only disagree a little.)

IMO, this situation is binary. Go to Afghanistan and accept the risks of all possible outcomes or don’t go.

and now they can have billions in foreign aid

“They has their chance and blew it. Too bad. What time is it? Anyone up for ice cream?”