“Previously, the school’s mascot was a narwhal in a basketball jersey.” 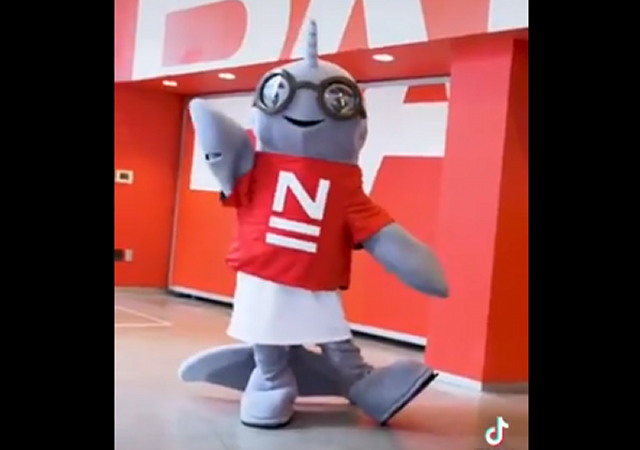 How long will it take for campus social justice warriors to find something wrong with this mascot too?

The New School’s mascot, a Narwhal named Gnarls, got a gender-neutral redesign for the Fall 2021 semester, the university reports.

Gnarls backstory includes an “unconventional” upbringing due to “distressing levels of ice loss” that forced the Narwhal’s family out of its Antarctica home.

Previously, the school’s mascot was a narwhal in a basketball jersey.

Gnarls then enrolled in The New School after encountering students from a real course called Vogue’ology.

The class focuses on the “African American and Latino lesbian, gay, bisexual and transgender Ballroom scene” and is based on “popular cultural representations of gender, class and race that has informed contemporary notions of gender performativity while also being used to affirm normative notions of femininity, wealth and whiteness.”

Graduating with a BA/BFA dual degree in Communications and Environmental studies would later “bolster Gnarls in [the programs’] environmental justice initiatives and make their signs all the rage at climate change protests.”

Get to know our mascot, Gnarls Narwhal (they/them), a social justice advocate and the first and only sea mammal to earn a BA/BFA dual degree from The New School! They can't wait to see you on campus this fall: https://t.co/ZWt6o2IoCB pic.twitter.com/XRa7iAR1rc

For those not familiar, Dan Harmon is the “voice” of reason in the current era. Between Community and Rick and Morty, he has attacked and outed all of the stuff that is currently wrong in the woke era.

This is about 10 years old.

I thought it was a unicorn with a “N” for neutered.

Now they can get on with the difficult task of changing the school’s fight song to a social work song.

And then the left wonders why we have so little respect for them.

The product of diseased administration/faculty and students too mentally incompetent to push back on this BS.

How long has that school been ‘new?’

A thought: has anyone noticed just how UGLY cartoon characters, invented mascots like this, and other not-real characters have gotten over the past couple of decades?

Compare, for example: Leroy Jetson with Stewie from, I think, some vulgar thing called Family Guy. Leroy: happy child with cartoonish interpretation of an all-American, tow-head boy from next door in Anytown USA. Stewie: misshapen head, constant look of pessimism or questioning, and, at bottom, ugly.