Unless directed to by government officials . . . and after having filled out the requisite online forms. 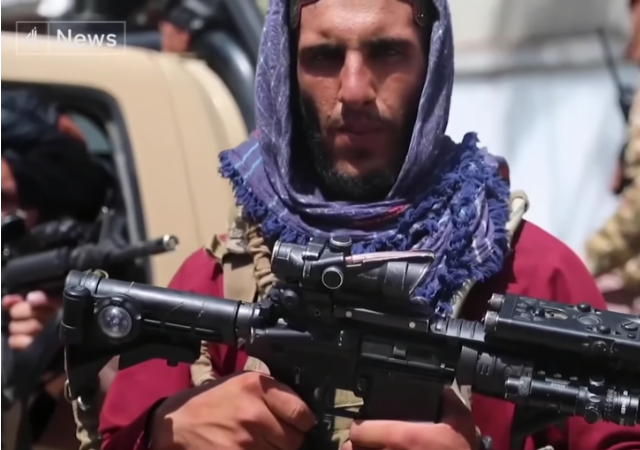 The situation in Afghanistan is deteriorating by the day.  Reports are now surfacing that ISIS is gearing up to attack Americans amid the humiliating and chaotic disaster created by the Biden administration’s epic failures in conducting an honorable, clean, organized allied withdrawal from the country.

Potential Islamic State threats against Americans in Afghanistan are forcing the U.S. military to develop new ways to get them out. U.S. citizens have been told not to go to the Kabul airport without instruction from a U.S. government representative. https://t.co/Pfc4fLXH2D

The American embassy in Kabul is now telling Americans not to come to the airport unless directed to do so by U.S. government officials.

US Embassy in Kabul issues updated security alert: Americans should *not* come to Kabul airport unless instructed by US government to do so. But first, fill out the online forms. And don't even think about calling us. https://t.co/6yTiSE7Bc2 pic.twitter.com/S0T4Y0woe7

They have communicated to the Taliban this is unacceptable, and Kirby said it may be a case of some Taliban fighters not receiving the word or choosing not to listen.  @CBSNews

And the Biden team still thinks that Americans will be happy to be out of Afghanistan—actually “reward” him—even as it looks increasing likely that many more Americans than died on 9/11 are at, and will be left at, the mercy of not only the Taliban but now ISIS, as well.

CNN’s @clarissaward in Kabul: “I'm sitting here for 12 hours in the airport, 8 hours on the airfield and I haven't seen a single US plane take off. How on Earth are you going to evacuate 50,000 people in the next two weeks? It just, it can’t happen.”

Actually I think shortly after if not before 9/11 real is going to happen.

But we had a deal

Except the Taliban are beating Americans according to SecDef.

Is the SecDef credible?

“The Taliban said THEY would not stop Americans from going to the airport.”

If Biden said they said it, they probably didn’t say it. I trust Biden about as far as I can spit and I’ve been known to slobber down my chin.

I think we are going to eventually see a significant number of Americans in Afghanistan become hostages and they will be used as shields against any use of American force. Bomb the American Embassy to render it unusable, hostages will be tortured and executed. Try to destroy American military materiel left behind, hostages tortured and executed – not a pretty scenario. Plus, many could die from health related problems, starvation and just plain torture and murder – for the fun of it – while being held in captivity.

It is truly heartbreaking to think that there is a very high degree of probability a great number of the Americans left behind will not make it home. I pray this doesn’t occur.

They have communicated to the Taliban this is unacceptable…

AKA a strongly worded letter

How hard did the Taliban leadership laugh on receipt?

Has it dawned on any of the geniuses in the Dem-media propaganda & ‘news’ complex that it is the interest of the Taliban to humiliate the US as much as they can? And that we now have zero leverage we can use to negotiate with them.

10,000 or more American citizens have been abandoned by the Biden admin and left at the mercy of the Taliban. And we all know how merciful the Taliban — and their ISIS and al Qaeda allies — are.

“Has it dawned on any of the geniuses in the Dem-media propaganda & ‘news’ complex that it is the interest of the Taliban to humiliate the US as much as they can? And that we now have zero leverage we can use to negotiate with them.”

They don’t care because it is part of the leftist plan to take America down a notch or two.

It’s only slowly dawning on the corporate media that the longer they play the stooge for the administration’s obvious lies, the more they look useless. And when the news media looks useless, it has no power to persuade the public.

“10,000 or more American citizens have been abandoned by the Biden admin and left at the mercy of the Taliban”

Yes, and if your goal was to completely neuter US military power against any Islamic country or terrorist group, anywhere on the planet, you couldn’t have done it better than giving the Taliban 10,000 hostages. Why, if I were a cynic I’d think this was deliberate strategy by the anti-American handlers running Biden.

Our leadership are traitors of the highest degree, they must be held accountable, but won’t be , these are NOT men of honor, these are cowards, absolutely cowards of the highest degree.
Will Citizens must stand up? Please we are a nation fighting in over face masks, I guess we are all Muslim women now..
Illegals are running across our borders infecting us and soon to be bombing us
Our leadership has not only given up the 6000 Americans but the entire Country
I am so ashamed and sadden

We have to negotiate with the Taliban for their release. So they can return home. They are not free to walk out the door, go to the airport, and leave. That means they’re hostages.

I heard today that your friendly, neighborhood Taliban got hold of an Afghan interpreter for the US …. cut off his arms, killed him and all of his family, except for a 10 year old girl, to be used as a sex slave. This could get really bad. Aside from the people who can’t get to the airport, everyone now there is a sitting duck for all the military hardware the Taliban now has – especially if they have not filled out the proper form. (Amazingly, no one crossing the Southern border needs a form and they are not in imminent danger of being killed.)

Everyone of them, everyone should be hunted down like the dogs they are

Biden and his administration MUST be thrown out

You don’t have to be a genius to see that winding down the war needed to be done in steps:
1. Get out all American civilians and give the UK and other allies warning in time to get out all of theirs.
2. Get out all embassy personnel and tell the allies to do the same.
3. Draw the military, together with their equipment, gradually back to Bagram air base, which is more defensible than Kabul.
4. Gradually haul the military and their equipment out of Bagram, and leave behind enough troops to advise the Afghans.
5. Continue to provide air support to the Afghan troops.

I wonder if anyone suggested this kind of exit to Biden. Apparently, his “plan” was:
1. Pull out all the military and hope for the best.

I meant to include the Afghans who had helped our troops, together with their families, to be gotten out with our American civilians and military.

Biden pulled the government employees out and let everybody else rot.

Adhering to the steps that you had listed/elucidated requires the possession of common sense, basic intellectual ability and a modicum of awareness of realpolitik — traits that the vile, narcissistic, arrogant, self-reverential and dim-witted Dhimmi-crat apparatchik-fools transparently do not possess.

Re: Apparently, his “plan” was:
1. Pull out all the military and hope for the best.

Is there any evidence that Biden can handle more than one simple sentence at a time?

“and after having filled out the requisite online forms”

As if the Taliban can’t shut off the Internet out of Afghanistan any time they want.

Grim stuff. How long before hostage beheading videos become as regularly frequent programming as they were during the days of narcissist-incompetent, Obama’s rule, a depressing reminder of American impotence and fecklessness?

what other message could you deduce/surmise from slojoe’s behaviour/actions than:
” i don’t care. you’re on your own but don’t worry, we’ll move on and forget about it.”

for an american “president” , the supposed/presumed leader of the free world, to abandon our countrymen(and their loved ones/dependents) to the “good will” of a bunch of terrorists is simply unforgiveable–there is no excuse