The airport is not secure. The Taliban are not making it easy for Americans to get to or into the airport. 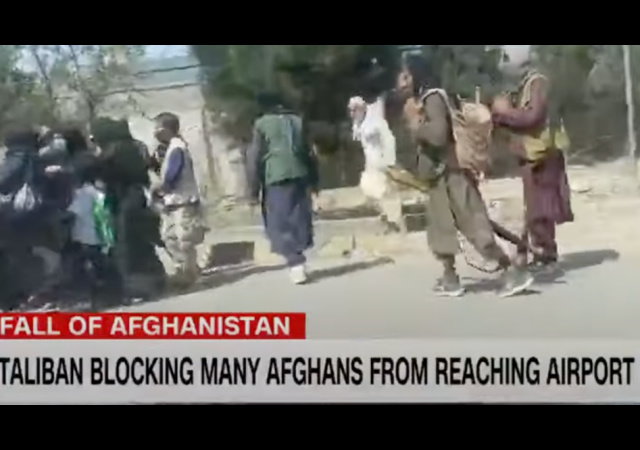 Do we need more evidence Biden is clueless and incompetent? Yes! Yes, we do.

The New York Post reported the Taliban have been confiscating Afghan-Americans’ U.S. passports outside of the Kabul airport:

“I got to the gates and was about to show my passport, but the Taliban got it, and he said you are not allowed to go through and wouldn’t give it back,” one Afghan-American, who served for several years as an interpreter during the war and has his home in the U.S but requested anonymity for safety reasons, said. “I was lucky a U.S. marine was right there and forced him to give it back.”

According to several others, some have not been so lucky — hamstringing their chance to make it home ahead of the Taliban’s officially assuming of the throne.

“U.S. passports, driver’s licenses — they are confiscating those pieces of documentation from American citizens,” said Ephraim Mattos, a former Navy SEAL and founder of the humanitarian organization, Stronghold Rescue and Relief, which is working around the clock to evacuate Afghans interpreters and helpers. “They lose proof of who they are, and this has happened on multiple occasions in multiple places.”

We also know the Taliban have been beating Americans trying to reach the airport.

What did Biden say during his press briefing? Oh, yeah.

Joe Biden all but admitted the White House’s plan to get Americans out of Afghanistan hinges on trusting the Taliban. Bizarre.

“To the best of our knowledge, the Taliban checkpoints, they are letting through people showing American passports.” pic.twitter.com/xCGFHs7Vpp

How can this be? Right after Biden’s news conference when he assured us everything is well. Airport is secure. Allies support what he is doing. He’ s done everything he can. No one could have done better. Reporters pressed him with hard questions, but he was able to answer everything that was thrown at him.

This is occurring because they have their fighting positions prepared. The way this seems to be going is they will soon be holding Americans as explicit hostages.

They prepared and Joe didn’t.

Will CNN have their nightly crawl, banner, chiron, or whatever it is called, with “American Held Hostage: Day 526” or whatever, like they did in Carter’s time?

Or, was that one of the other news networks? I can’t tell them apart.

In my opinion, Biden ranks next to the Taliban for lying and corruption.

In my opinion, the Taliban rank next to Joe Biden for lying and corruption.

How many naturalized American Citizens that are Afghans went back to Afghanistan? Kudos to them for choosing to join the good guys but that doesn’t seem very prudent.

IMO, they were viewing and using their US passport as if it were a vanity credit card/get of jail free card combo. It’s similar to some extreme adventure sport aficionado who decides to hike into a remote wilderness during a wildfire and gets mad because the search party can’t find them.

My point is that anyone from Afghanistan who become a naturalized US Citizen knows exactly what would happen should the Afghan gov’t collapse.

Not saying we shouldn’t help them when and where possible. But this isn’t BettySue and JimBob from Cedar Rapids who were do gooder idealists working with some aid project or NGO who we wouldn’t expect to know any better.

So for you it is not “We leave no man behind.” People who risked their lives translating and providing vital services only native born people could provide we have no obligation to, even if they are U.S. citizens?

Did I state that? Nope, sure didn’t. Why would you attempt to ascribe motives to me? It’s certainly not coming from a place of good faith. Speaking of ‘leave no man behind’ how long did you spend in ground combat assignments where that credo is relevant? For that matter when are you flying in to help out?

How many of the Afghans who ‘provided vital services’ are you willing to sponsor? Personally house and feed, provide medical support and all the other things that come with modern life? Without tax payer assistance? If the answer is none you need to stop your moral preening.

The fact is that these naturalized US Citizens deserve to receive the same level of support and assistance in Kabal that every other US Citizen is receiving; nothing more and nothing less.

None of that changes the fact that these folks were very aware of the consequences of the collapse of the Afghan Gov’t. That’s not arguable by any honest person. They don’t deserve what is happening.

That can’t be! Biden said all you had to do was show your US passport to get right through the Tollybahn checkpoint. They will let you right on through.

I bet that they want those passports in order to send terrorists here.

Meh, fake passports are available for a price. Real passports from other nations as well. It isn’t as if the lack of a passport is halting entry on our southern border.

They could be taking passports of Afghan-Americans to try and infiltrate onto the airport. A real passport with a close enough photo will get past moderate to close scrutiny more reliably than a fake passport. Just a possibility.

True. Though if simply flashing a passport gains admission that’s a problem. Likewise when the deadline comes and there are sob stories about folks who’s credentials were take and won’t be let in. I suspect we will drop or lower the criteria at that point.

The Americans forced to give up their passports, DLs, other identity documents, etc., will never come home alive. But those documents will be back to the good ol’ US of A. Sure, high quality forgeries, or blanks are available for money. But we just handed the Taliban and their associates a massive stockpile of arms, munitions, and equipment for free. Why not take the documents too? They may not fool a customs or immigration inspector. So what? Who needs to deal with those with the chaos Biden etc al have engineered on our southern border.

The point, however, is that if you want to infiltrate your enemy’s country by mixing your people in with refugees, it is to your advantage if the refugees can’t prove who they are, while at the same time your enemy is under political pressure to rescue them and therefore likely to let them through relatively unvetted.

So you might say seizing the passports is a way of “shaping the battlefield”.

True. I don’t disagree. There’s likely a segregation post admission to the airport to attempt to weed out infiltration prior to loading up on a flight to the US. If not there then in a 3rd nation for processing.

We’ll get right on that once they’re settled in Provo.

I suspect once on the airport they will want to move them off and do a more in-depth screening at some other location. But getting some of your people onto the airport for close reconnaissance and possible other activities, like create mayhem and discontent, would be an advantage for the Taliban.

This is why the US is controlling who comes in, limiting their numbers, and then trying to move them on as quickly as possible – one reason.

In a chaotic situation even the Taliban higher command may not be all seeing. Any group of fighters very possibly can do as they please as long as in their eyes it follows Islamic law, and we know the inhumane acts that allows.

How long till their is a violent clash between Taliban and our troops at the airport ? This is a very high risk situation.

“To the best of our knowledge, the Taliban checkpoints, they are letting through people showing American passports.”

We ought to hire the Taliban to man the checkpoints on our border.

What use would a bunch of terrorists have for passports? It’s not like they want to blow up buildings in the United States, right?

A few televised beheadings of hostages will change the vile Dhimmi-crats’ idiotic narrative of “nice guy” and trustworthy Muslim supremacist/terrorist thugs, the Taliban, very quickly. We’ll soon be back to the dark days of vile narcissist-incompetent, Obama’s, rank foreign policy disasters, when an American hostage was being beheaded on video, every other day, just like a regularly scheduled TV program. And, Obama’s callousness, impotence and total indifference to the hostages’ plight were obvious to all rational observers.

Let’s not bring Obama into this. He has a legacy to protect and it dampens the party mood on the Vinyard. /s

Anyone who steps illegally onto U.S. soil has had all the rights of citizenship, and will become one eventually. Their children born on U.S. soil, illegally, became citizens immediately. 160 million legal and illegal immigrants, and their U.S. born children, became “citizens” in the last 50 years, through this broken system, diluting the votes and rights of real U.S. citizens who have deep connection to this country. Citizenship means nothing anymore. It’s passed out freely to anyone, like the useless mailers in your mailbox. The U.S. government is bankrupt and unable to function. It really doesn’t exist anymore. Those “U.S. Citizens” left behind are just Afghans with garbage mailers that say they are U.S. citizens.