But Biden promised Americans had no problem reaching the airport! 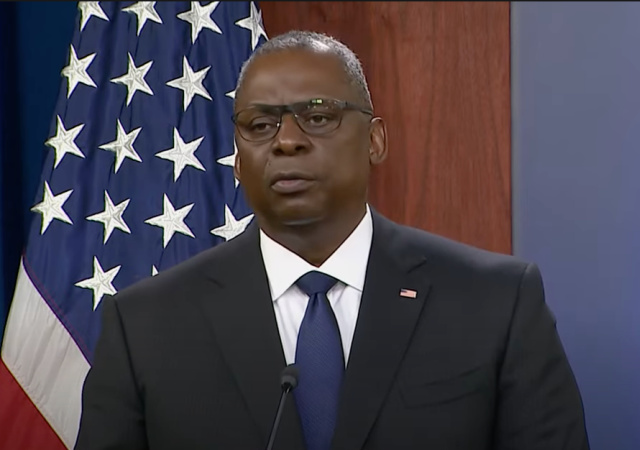 Yet another Biden secretary contradicting his remarks in his press briefing.

Biden said he did know of Americans having problems reaching the Kabul airport. After all, the Taliban pinky swore they would take care of Americans!

Because you can totally trust a terrorist group.

NPR: Are you saying any American can get to the airport, past the security barrier, and to where they need to go?

BIDEN: To the best of our knowledge, the Taliban are letting through people with American passports.

The guy is literally entrusting American lives TO THE TALIBAN. pic.twitter.com/Of7nmKJCw0

Defense Secretary Lloyd Austin told Congress that the Taliban have not kept their promises.

NEW: Defense Secretary Lloyd Austin in a briefing call with House lawmakers just now said Americans have been beaten by the Taliban in Kabul, according to multiple people on the call. Austin called it “unacceptable.”

Austin’s full quote on Taliban beatings during the House briefing, relayed to us by multiple sources:

“We’re also aware that some ppl including Americans have been harassed & even beaten by the Taliban. This is unacceptable & [we] made it clear to the designated Taliban leader.”

Now I know how the citizens of Rome felt as the barbarians were closing in.

Has there ever been someone this stupid and as high ranking in the US military as this clown?

Affirmative Action FAIL. This clown has been too focused on hunting don Conservatives in the Military.

So when will there be meaningful retaliation?

When we reelect PDJT.
Did biden* choose people who look stupider than himself on purpose? This idiot looks like a village is looking for him.
I’m going to guess an affirmative action hire. Wonder if he’s worth $15 an hour. Not as far as I’m concerned.

No moron hires anyone more intelligent than they are. Ponder on that, this guy was hired by a dementia patient that never had much upstairs in his prime…

When will there be meaningful retaliation you say? Not until they put on red hats and attempt to have a peacful demonstration.

we don’t need no stinkin retaliation.

I’m noting how, suddenly, the various agencies are lining up and contradicting Biden.

As someone else has already said enough another thread, gone in two weeks. It would be ironic indeed if he hung on til September 11.

Yep. This is the excuse to ditch him, I think. I wonder of it wasn’t manufactured. How can someone screw up this badly?

Oh, don’t worry about Austin. He will be making megabucks from a defense contractor or as a hedge fund manager. Maybe even a CNN shill. He’ll do fine.

Or, put on the board of directors of some multinational company with a US mailing address. Senior Vice President of Token Black Board Member.

All the above, and more! Don’t forget about the book deal and the speaking fees!

And the art shows! How did I forget about that?

“How can someone screw up this badly?”

He was prepared. Remember! He went to college and stuff…!

Yeah, but none of the brave news reporters dared to ask any other questions than what was pre-planned.

Biden gets everything back-asswards. Kabul spelt backwards is Lubak. What, you ask, does this mean in Tagalog? Answer: Burial

BTW, those paintings of Hunter aren’t so hard to figure out. They depict Kamala Harris’s bedsheets at pivotal career points.

Wow. A “sternly worded statement”.
What the heck are you going to do about it Lloyd?! Get those US citizens out and stop yapping! Action man!

He’s a prime example of a quota filler.

If Diversity is our Strength (TM) why did an all male, Islamic, Pashtun militia defeat the most powerful (and diverse!) army in the history of the world?

Because they didn’t have nukes and F-15’s.

Just like they had against the Russians. Same guts and basic weapons when they ran the Brits out almost two centuries ago.

And patience and willingness to embrace hardship and determination.

Don’t mis-underestimate the value of a Toyota pick-up truck.

Yes, but even ‘filler’ has grades. This guy is grade D.

But then, that’s why he’s been put in place.

Who is actually running our nation? And what is their final plan?

Answer: exactly who we fear is running our country. And the final plan is martial law. Followed by genocide.

They’ve just shown us how cheap American life is by ditching Americans by the thousands to the mercy of barbarians armed to the teeth with weaponry “they” have just given them.

It would appear that the secretary does not welcome taking a knee for his commander in chief. That said, how many people knew or should have known the predictable progression forced by this choice (not that Choice, but the victims and collateral damage are similar in nature)?

If thsi guy got on his knee, he’d probably not be able to get up.

Maybe a floor jack would help?

Because they didn’t have nukes and F-15’s.

You can say that again…

Moreso: they had obama and biden committing treason for them, at first via Iran, and now just straight the Taliban – and on a scale no horror movie could make believable.

This will take generations to overcome, if ever. World freedom just took a bullet to the heart, and the only sheriff worth a crap – the United States – has been cut off at the knees by illegal immigration.

OK, it is “unacceptable”. Exactly WHAT are you going to do about it?

These Perfumed Princes think that words are all that matters.

That sure is one stinky perfume. It will travel with him for a while.

But the good news is diversity. inclusion, and equity indoctrination in the military, and the purge of white supremacists (AKA overt Trump supporters), is well ahead of schedule. And, all considered, that’s much more important in the long run than rescuing the (expendable) 10,000 Americans the Taliban is holding hostage.

Comrade Obama is pleased. The five year plan is still on track.

” The five year plan is still on track.”

You’re damn straight it is.

The only saving grace is in all this is to be able to be laying on your death bed as an old person, saying to the suffering younger generation (who sold their souls for trinkets): “Told you so. Sorry you didn’t listen. You’ll now have to fight your way out, or die. Between you and me? – You don’t have what it takes, and you’ll probably die young, unhealthy, unhappy and probably a tortured soul.”

It ain’t the young people making these decisions.

Biden’s defense would be that those beatings took place four or five days ago. They weren’t on his watch.

@Austin … yeah … the Taliban ain’t out there serving up tea and crumpets to those waiting in line … they’re roughing up American’s. So what are ya gonna do about it jack-off?

“what are ya gonna do about it jack-off?”

You answered your own question.

How can he do anything? Aren’t the Taliban now equipped and positioned to pretty much wipe out everything and everyone at the airport if they choose to? Would it take much mortar fire or missiles shooting down planes to make the airport unusable and anyone there shot at their leisure? If anything remotely like this were to develop, Biden may have a health crisis and Harris take over.

10,000 American citizens are being deliberately sacrificed for the greater glory of the Obama/Jarrett plan to make Heels-Up Harris POTUS.

It’s a small price to pay to usher in Comrade Obama’s utopian vision of a fundamentally transformed America. Right?

Well Loyd Austin is a retired Army General–he may even have been a four star general. But he looks and sounds dumber than a box of rocks.

But my vote for the most egregious thing of all is the Pentagon’s “spokeshole”. He’s doing an errand boy’s job–but he’s a Navy Admiral! Crikey! But I suppose that’s not an unusual assignment for one or more of the multistarred Perfumed Princes of the Pentagon.

The powers that be allowed many times more to die of Covid, die of Covid restrictions, and Covid malarkey while denying efficacy of hydroxychloroquin and then ivermectin. Just to ruin the economy, defeat Trump, and give us a pretend vaccine with many boosters. They care about power and lives of insignificant people are, well, insignificant.

If there isn’t a God, they’ll be okay. If there is, and I believe there is,
They will suffer mightily.

Narcisstic fools, liars, fabulists, and incompetents — that’s what the vile, Dhimmi-crat apparatchiks are.