“Seeing bodies on the street is an every day thing” 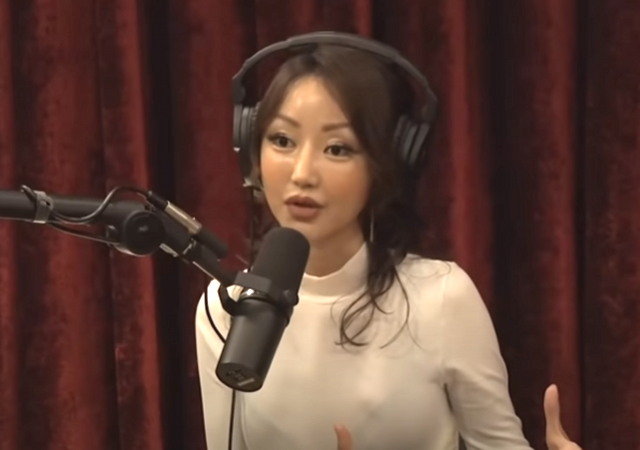 We have featured Yeonmi Park in other posts. Her story is absolutely fascinating because she escaped from North Korea but was old enough to remember what life is like there.

She recently appeared on Joe Rogan’s top-rated podcast and provided new details that are nothing short of horrific.

Ms. Park describes the starvation, the constant presence of death, and the abject fear people live in every day. Rogan does an excellent job of asking questions and then letting Park talk for as long as she wants.

Stewart Perrie of Lad Bible says this is being called one of Rogan’s best interviews, and I’m inclined to agree:

The North Korean defector sat down with the podcaster to talk about the harrowing life she led in the Hermit Kingdom, the things she endured, the horrors she witnessed and the daring escape that she made.

The more than three-hour interview is certainly not for the faint hearted and she goes into detail what the conditions are like inside the most secretive country in the world.

In one section Yeonmi spoke about the vast amounts of starvation that occurs in parts of North Korean.

“Because she could have [been] killed, and raped and starved.”

She said she was never taught to feel bad for all the dead bodies she would see every day scattered around the place.

Joe Rogan’s YouTube Channel ‘Powerful JRE’ has posted two excerpts from the interview. I recommend watching both, but be forewarned, they are not for the faint of heart. She describes scenes of rape, starvation, slavery, human trafficking and other atrocities.

In this video, she describes her life in North Korea and her escape:

In this segment, Park talks about the ever present fear of starvation:

I strongly recommend watching the whole interview. Here’s how to do it.

Go to Spotify and sign up. It’s free and takes about 60 seconds.

Then you can watch Yeonmi Park’s interview, along with any other episodes you may want to watch. Rogan’s interviews tend to be at least two hours long so they make great listening on long car trips.

One of the points Yeonmi Park makes in the full interview is that people on the left in America think they are oppressed, but don’t even know the true meaning of the word.

She marvels at celebrities and politicians talking about slavery that happened in America’s past, while ignoring the fact that slavery exists in China today.

She describes the horror of living in a communist dictatorship where the government provides for all your needs, but everyone except the members of the inner party are slowly starving to death.

Listening to her speak is a real learning experience. Most people have no idea how bad life is in North Korea. This interview will shock you.

She understands exactly what, from each his abilities to each his needs, means. It doesn’t mean a level playing field where you play video games for life.

“Ms. Park describes the starvation, the constant presence of death, and the abject fear people live in every day”

Except for the starvation, it sounds likes every democrat-run city in America.

If things continue in the direction they’re going, by this time next year she can say, “I jumped out of the frying pan and into the fire.”

She marvels at celebrities and politicians talking about slavery that happened in America’s past, while ignoring the fact that slavery exists in China today.

I marvel at this every time I look at Made in China goods that I see in the big box and dollar storers–or when I put on an MiC blouse that I bought long ago.

I wonder: How many slaves made this?

Who would have down-voted this – except for an operative or sympathizer of the Chinese government.

Re “celebrities”: we don’t call them ‘hollywood idiots’ for nothing.

The coddled, narcissist, ingrate and self-entitled Dhimmi-crats who venerate socialism/communism/statism and who constantly denigrate the U.S. at every opportunity, should be forced to watch this. These idiots don’t comprehend how good they have it — all that they’ve every known is comfort and plenty.

It is readily apparent that the leaders of rank and file coddled, narcissist, ingrate and self-entitled Dhimmi-crats are actually fat cats, and they get fatter and fatter.

Don’t doubt the cleverness of these maggots.

And how can I mention ‘fat’ without mentioning Stacey Abrams?

It should be shown to all high schoolers, 9th grade and up.

Reading suggestions, only three of many:

“An American Spy Inside North Korea”
“A River In Darkness”
“The Girl With Seven Names”
.