“Columbia told us [what] we can’t talk about and I am so concerned if America is not free, I think there is no place else left that is free” 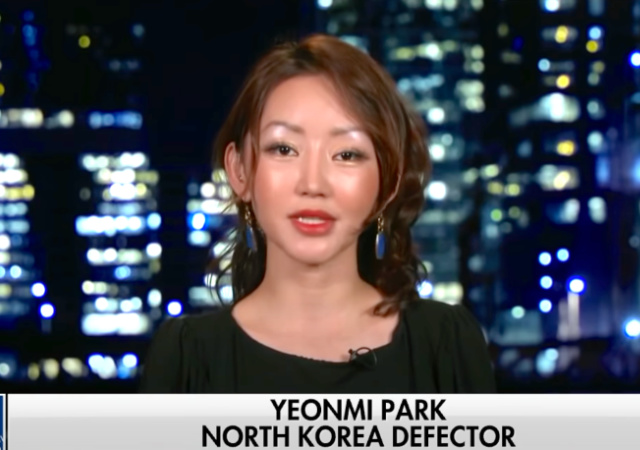 Christian missionaries helped Park and her mother escape to Mongolia across the Gobi Desert. They settled in South Korea.

Park published her memoir In Order to Live in 2015.

One of several hundred North Korean defectors settled in the United States, Park, 27, transferred to Columbia University from a South Korean university in 2016 and was deeply disturbed by what she found.

“I expected that I was paying this fortune, all this time and energy, to learn how to think. But they are forcing you to think the way they want you to think,” Park said in an interview with Fox News. “I realized, wow, this is insane. I thought America was different but I saw so many similarities to what I saw in North Korea that I started worrying.”

The first warning sign came at orientation when Park admitted her love for classic literature.

Park mentioned Jane Austen. A university staff member chastised her, “Then she said, ‘Did you know those writers had a colonial mindset? They were racists and bigots and are subconsciously brainwashing you.'”

English is Park’s third language. We all know it is not an easy language to learn. A lot of native speakers butcher it every day:

She was also shocked and confused by issues surrounding gender and language, with every class asking students to announce their preferred pronouns.

“English is my third language. I learned it as an adult. I sometimes still say ‘he’ or ‘she’ by mistake and now they are going to ask me to call them ‘they’? How the heck do I incorporate that into my sentences?”

“It was chaos,” said Yeonmi. “It felt like the regression in civilization.”

“Even North Korea is not this nuts,” she admitted. “North Korea was pretty crazy, but not this crazy.”

Park accused the universities of denying Americans the “ability to think critically”:

“In North Korea I literally believed that my Dear Leader [Kim Jong-un] was starving,” she recalled. “He’s the fattest guy – how can anyone believe that? And then somebody showed me a photo and said ‘Look at him, he’s the fattest guy. Other people are all thin.’ And I was like, ‘Oh my God, why did I not notice that he was fat?’ Because I never learned how to think critically.”

“That is what is happening in America,” she continued. “People see things but they’ve just completely lost the ability to think critically.”

Park eventually learned to keep her mouth shut and not argue “maintain a good GPA and graduate.”

Park said that her collegiate curriculum of censored speech in the name of “safe spaces” and instilled hatred of White Americans reminded her of the North Korean “American bastard” indoctrination.

“My enemy used to be Kim Jong Un: I have been on Kim Jong Un’s killing list of people for many years because I spoke out, and my original family got punished but now ironically enough, so many Marxists and Communists and Maoists and Leninists are now are sending me death threats,” she continued, calling the U.S. cancel culture a sad “irony.”

She added that she is afraid to speak her mind in public, especially on campus, because of the cancel culture.

“I crossed the Gobi desert to be free and now I thought I live in a country where I can say what I believe and have my freedom to think. However, now I have to constantly censor my speech because in the name off a safe place,” she said.

“Columbia told us [what] we can’t talk about and I am so concerned if America is not free, I think there is no place else left that is free — that’s why it’s really alarming to me,” said Park.

Park also could not believe how every professor blamed white men for society’s problems. The way white men colonized Africa and Asia messed “up everything and they are the ones who need to be blamed.”

The New World Order. We are not going to win this fight in the already rigged academic and legal battlefields. We are going to win it on our own turf with the will to just say NO!

And the McConnells, Grahams, and Grassleys are NOT on our side! Could we please stop reporting on their latest RINO ploys?

“”Could we please stop reporting on their latest RINO ploys?””

Because ignorance is bliss? Let’s go all in and just stop reporting everything the Dems are doing too, because it upsets you and we can’t do anything about it anyway.

I completely agree, and my case is quite similar.
I crossed the sea in search of freedom, and now I see this country turning into a caricature of the tiranny I ran from.

Woke is run by women, NK is run by men. No comparison, different purpose. Feelings rule vs structure rules.

LoL, when a Nork defecter says your nuts, your totally loco

Frequently it takes an outsider to provide perspective, although I don’t imagine it works with the “woke” crowd in any event.

She seems to get it.

My Democrat friends know there is a problem. They are just afraid to admit it. They are worried that if they say something outside the Liberal orthodoxy they will be accused of being a Trump supporter. For many Dems – that worse than being called a racist.

It seems to me that – very few Dems actually support CRT and the woke bullshit. But they will not stand up to fight it.

Most Dems today are cowards who go along with Progressives because they bought the propaganda that Republicans are racists. And they cannot conceive of the possibility that leaders of their own party are actual racists and/marxists. They also think of the accusation of Marxists in the Dem Party is a “right wing talking point”. In fact, a liberal told me exactly that. He said there are a few fringe radicals who may be socialist-leaning and that Republican try to use that fact to sear all Democrats. I said, dude – you have member of the Socialist-Democrats in Congress – AOC – it’s no longer just a fringe of the Party – their taking over your Party but the media had blinded you and played upon your TDS – so you don’t see it. He tells then accuses me of being blinded by Trump – confirm his TDS.

I’m a liberal Democrat, and I’ve heard other people who used to sound like liberal Democrats get incredibly defensive when I point out how completely unhinged the dominant faction of our party has become. They preemptively (and indignantly!) accused me of spreading rightwing conspiracy theories as a way to avoid engaging with the substance of what I was saying. I see principled liberals (and broadly liberal principles), not conservatives, as the primary target of their illiberal ideology. The truth is that many principled conservatives are far more liberal than the illiberal left.

She’s most definitely not alone in this. My wife has observed the same thing, though she’s comparing it to Czechoslovak communism.