Israeli Defense Minister Gantz: “Amir Ali Hajizadeh, commander of the IRGC’s Air Force, is behind dozens of terror attacks in the region employing UAVs and missiles.” 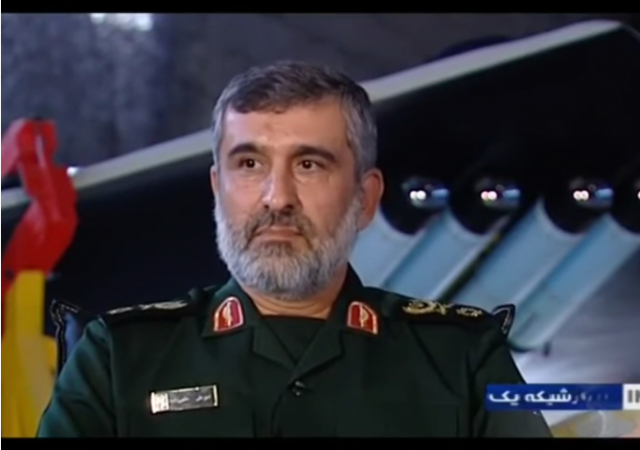 Israel has revealed the identities of Iran’s Islamic Revolutionary Guard Corps (IRGC) commanders who carried out last week’s attack on an Israeli-owned ship in the Arabian Sea.

In a briefing to the ambassadors of the United Nations Security Council member states, Israeli defense and foreign ministers named commander of the IRGC’s aerospace force, Amir Ali Hajizadeh, and head of IRGC’s drone unit, Saeed Ara Jani, as the main culprits behind the suicide drone attack on an oil tanker that killed two European crew members.

Multiple armed suicide drones reportedly hit the tanker, a tactic perfected by the IRGC — the Iranian regime’s military arm and a U.S.-designated terrorist organization — and Iran’s proxy terror groups in the Middle East.

Other nations have confirmed the revelations made by Jerusalem. “Britain, Romania and Liberia told the United Nations Security Council on Tuesday that it was “highly likely” that Iran used one or more drones to carry out a deadly tanker attack last week off the coast of Oman,” Reuters reported on Tuesday.

The news comes just a day after Iranian hijackers tried to take control of a tanker off the coast of Oman. “Iranians stormed an asphalt tanker and tried to take it to their home country but the crew sabotaged the engines of the vessel so it could not move,” The Times of London reported on Wednesday, citing UK government sources.

The Times of Israel reported the IRGC’s involvement in the drone terror strike:

Defense Minister Benny Gantz and Foreign Minister Yair Lapid named on Wednesday the Iranian commanders they said were behind last week’s attack on an oil tanker off the coast of Oman.

“Amir Ali Hajizadeh, commander of the IRGC’s Air Force, is behind dozens of terror attacks in the region employing UAVs and missiles,” Gantz told envoys from countries on the United Nations Security Council during a briefing at the Foreign Ministry in Jerusalem. “For the first time ever, I will also expose the man who is directly responsible for the launch of suicide UAVs — his name is Saeed Ara Jani and he is the head of the IRGC’s UAV command.”

“The UAV command conducted the attack on Mercer Street,” he said. Saeed Ara Jani plans and provides the training and equipment to conduct terror attacks in the region.”

The Israeli disclosure comes as Iran heightens its aggression in the high seas. In March, an explosion, likely caused by a sea mine or missile, hit an Israeli-owned cargo ship in the Gulf of Oman.

Oil-producing Gulf Arab states must view the attacks on Israeli vessels near the Strait of Hormuz as a warning. The strait that runs between the Arabian peninsula and Iran forms a narrow waterway where ships carry one-third of the world’s oil supply.

In recent years, Iran has increased its attacks on the strategic oil transit chokepoint. The IRGC top commander, Hossein Salami, even boasted the regime’s ability to target ships in the international waters. The Iranian “missiles can hit with great precision carriers in the sea,” the IRGC chief claimed in 2019.

Amid these acts of aggression, the Iranian regime is racing towards a nuclear bomb. The European Union-sponsored talks between the Biden administration and Tehran have only encouraged the government to ramp up the production of enriched uranium, the key ingredient needed for a nuclear bomb.

The Mullah regime now openly boasts of being on the threshold of producing weapons-grade uranium. “Iran’s Atomic Energy Organisation can enrich uranium by 20% and 60%, and if one day our reactors need it, it can enrich uranium to 90% purity,” Iran’s outgoing President Hassan Rouhani declared last month.

According to an official Israeli assessment, the rogue Shia-Islamic regime is just weeks away from reaching its goal. “Iran has violated all of the guidelines set in the JCPOA and is only around 10 weeks away from acquiring weapons-grade materials necessary for a nuclear weapon,” Israeli Defense Minister Benny Gantz told foreign envoys on Wednesday.

Guess he should have been keeping a better eye on his own boats. I hear there was a barbecue this morning.

Which will happen first – the Iranian people depose the Mullahs, or the Mullash drag Iran into another bloody external conflict?

I will go with “Bloody Conflict” in Iran for $200 please.

Time to send Mr. Jani to the “Big Sleep.”

When Israel calls you out by name, go home and write your will.

There is no way that Israel could know so many intimate details unless they are being fed facts from inside Iran.

They need to be exterminating these people, not identifying them. Israel’s present government is every bit as worthless and incompetent as what we have in Washington.

The attacks on shipping will only get worse until there’s a price attached to it that they’re unwilling to pay. The price needs to be exacted from the people at the top who are ordering the attacks — not just the IRGC, but the Council of Guardians, high government officials, and Khamenei himself.

No coincidence that the Iranians are becoming much bolder, now. that the illegally elected demented puppet is sitting in the Oval office in Washington, wearing his drool cup and being spoon fed Cream O. Wheat.

Israel and its allies needs to take out the new Iranian oil port in Southern Iran. Iran should not be able to ship oil while it destroys oil tankers of other country’s while navigating in established shipping lanes for commerce. Iran then needs to be put on notice your country’s leadership, illegal nuclear producing facilities, and military is in grave danger with any future provocation!