Sheriff Craig Apple: “The end result could either be it sounds substantiated and an arrest is made and it would be up to the DA to prosecute the arrest.” 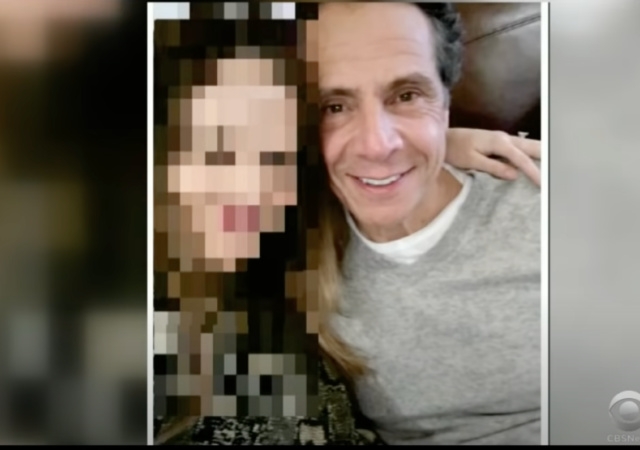 A woman who accused Gov. Andrew Cuomo of sexual harassment filed a criminal complaint against him at the Albany County Sheriff’s Office.

The unidentified victim lodged the most serious accusation against the governor detailed in AG James’ report, alleging he pulled her in for a hug, reached under her blouse and fondled one of her breasts in the Executive Mansion in Albany on Nov. 16.

“I mean it was—he was like cupping my breast. He cupped my breast,” the woman told investigators on AG James’ team.

“I have to tell you it was—at the moment I was in such shock that I could just tell you that I just remember looking down seeing his hand, seeing the top of my bra and I remember it was like a little even the cup—the kind of bra that I had to the point I could tell you doesn’t really fit me properly, it was a little loose, I just remember seeing exactly that,” she added, according to the report.

Cuomo’s attorney Rita Glavin gave James his itinerary on November 16. The woman then said it happened around November 16:

The accuser, however, told the Times Union that the incident took place on another day around Nov. 16 when she had gone to the mansion to help the governor send a text message from his phone to Stephanie Benton, the director of the governor’s office. The woman told sheriff’s investigators on Thursday that telephone records of Cuomo and Benton could pinpoint the precise day on which that text was sent, the paper reported.

The woman also told investigators that Cuomo groped her after asking her to snap selfies inside his office at the Executive Mansion on Dec. 31, 2019.

As she took the photo, Cuomo “moved his hand to grab her butt cheek and began to rub it” for at least five seconds, the AG report alleges.

Cuomo told her not to share the selfie with anyone. The woman wanted to tell someone but feared she would lose her job.

Sheriff Craig Apple said an arrest is possible: “The end result could either be it sounds substantiated and an arrest is made and it would be up to the DA to prosecute the arrest. Just because of who it is we are not going to rush it or delay it.”

As a lifelong New York resident, it would give me a wonderful warm, happy feeling to see pictures of our esteemed governor being perp-walked out of the Executive Mansion.

But I’m not holding my breath.

One accuser with no proof. Her word against his. Case dismissed.

It’s gonna take more than 1 or 2 accusers that file a complaint to get this guy out of office. In all but one of the eleven documented cases – it is a she-said / he-said. He will say they women either misunderstood or fabricated the event.

And this guy is known to fight dirty. Just wait. I bet he has lots of dirt on every one of these corrupt Assembly members. NYS assembly is not known as a bastion of integrity.

I got a pedophile child psychiatrist who had been molesting boys for 40 years into prison. There was no actual “proof” they were assaulted. In most sex abuse cases there is no “blue dress.” He’s going down. Read up on how sex harassment and abuse cases are tried

Well, I thought Northam the black face Klan clown of Virginia was going down. I was wrong. I can see Cuomo hanging on simply because his negligence and malfeasance in ordering WuFlu-infected patients back into nursing homes is going unnoted. If the Dems really wanted him gone, it would be on this charge, not him being a gross skeevy freak crooning decades-old tunes to underlings.

Remember, #MeToo was all about getting Trump, not their own. Democrats don’t give a rat’s patootie about sexual harassment, assault, rape, it’s just part of the game to them. Thus the Occupy rape tents, the lefties in Germany refusing to identify their Muslim immigrant rapists, and etc. These are sick, sick, sick amoral people. Not immoral, actually and truly amoral. Cuomo will survive this, I think. Though I hope to God I am wrong.

@Mercyneal – the pedo you got convicted was not the post powerful political force in one of the largest states in America. Cuomo has dirt on everyone and he is known to play dirty. Even after all that has been revealed – he still has support of about 25% of people in New York. Imagine that – 25% of people don’t care that he has credibly been accused of both sex harassment and policies that caused the death of thousands.

Gov. Northam on VA survived the revelation of racist past actions at a time when wokeism has become the Progressive religion. Cuomo is 10x more powerful than Northam. True, it’s not exactly an apples-to-apples comparison. But it does give a sense of the uphill battle in removing a sitting governor from office.

Contemporaneous police report or it didn’t happen. Women change reality all the time when it’s to their advantage. A contemporaneous report at least suggests single mindedness at the time. No workings of time.

Else there’s no due process.

I am sure this is the standard that the Dems were applying when women came forth with claims against conservatives, isn’t it?

It’s the standard a man applies because he’s always looking at structure. A woman goes with feelings and so due process is just an impediment.

The majority of men and women who are sexually abused don’t come forward until a long time later. That’s why some states like Massachusetts have a “stop the clock” law, meaning that if the abuser moves out of state, the clock stops and he or she can be brought back for prosecution at any time. Most male victims never come forward. Those who do, wait at least 20 years to do so… More women file a complaint but many don’t, because of comments like yours. Please read up on how and when victims report

Adolf Guggenbuhl-Craig “From the Wrong Side” a paradoxical approach to psychiatry.

Pure innocence vs pure evil is called a partial archetype, as I recall.

Incidentally, child abuse didn’t exist before the 60s, and child sexual abuse before the 70s. I suspect its news rating value was discovered and now it’s everywhere.

Ian Hacking “The making and molding of child abuse” 1991 for the history.

Public problem means somebody discovered it and took ownership of it. Before that it was a private vice. Gudfield “Contested Meanings” is a good analysis of the sociology of the discovery of new public problems.

Anyway be aware that the filters you see things through are affected by ratings needs and political needs, as if that weren’t obvious from politics alone these days.

I bet democrats felt safe when the wokes were going after republicans.

A real shame about the suicide she committed tomorrow.

She will use the usual method. Two .22 in the base of the skull, followed by half an ounce of fentanyl. After that, she will hurl herself off the observation floor of the new World Trade Center.

Come on she could have an accident. She might fall down an elevator shaft on to some bullets.

Yes. Because she will surely file a civil suit. As will the other women.

All of Cuomo’s $5 million book advance will go to lawyers and settlements. In fact, he may have to write another book to cover all his expenses. Maybe it will be a “tell all” in which he delivers dirt on all the crazy progressives. I’m sure he has volumes of dirt on dozens of DNC people. He is quite vengeful – so this would be in character.

We should all welcome civil litigation discovery. The proof in a civil case is FAR less than in a criminal case. I am not an attorney by any means, but the civil standard of “preponderance of the evidence” versus the criminal “proof beyond unreasonable doubt” is huge.

I treated multiple victims of sexual harassment and resulting mental illness in my psychiatric practice of over five decades. I am NOT a leftist, but a true, evidence-believing psychiatrist-neurologist conservative. With few exceptions, the women (AND men—do not fool yourselves—women are far more sexually predatory than men—and I challenge anyone to prove me wrong!) not only had enough forensic evidence to prove they were correct, but male victims were far more negatively affected because they never suspected they would be victims.

Bottom line: the lezbo AG pursued the case, but she also provided a “political persecution” case for Luv Guv Cuomosexual to claim it.

Nope. Albany Sheriff has a press conference tomorrow. And bear in mind FOUR OTHER DA’s offices are investigating Cuomo.

And his booking photo will be immediately leaked and splashed all over national papers for a couple weeks, right?

Some important senator showed how to do booking photos – dress for a campaign poster. Tie, smile, lots of teeth, glad-handing. That way the news won’t run it.

I’m sure that the accident will be both tragic and deniable.

It’s always the gun-grabbers grabbing… other things.
David Codrea maintains a list tracking Bloomberg Mayors Against Illegal Guns who have been convicted or shamed out of office for outright criminality — quite a few carnal, mostly corruption, a few ironically for violent crime, including gun crime.
Here’s today’s example.

Well, yes, that is a very good example.

Lesbia “Letitia” the AG believes Cuomosexual stands in her way. Democrat party finds him a liability and prefers the extreme lefty. Either Arkancide ensues or NY lefties cashier him to get lefty votes they stupidly forgot they already have.

Let them autocannibalize. In the meantime, grab popcorn and beverage of choice.

I certainly am enjoying the hell out of this!

I’m all for Cuomo going down but based on the headline how does this qualify for an arrest? Everything I have read says this level is a misdemeanor offense as it is described here.

I’m skeptical because the way an LEO is framing it sounds like overkill to try and clear Cuomo, both criminally and politically, with the “not arrested” line.