“Once [a migrant gang member] makes the declaration of, ‘My life is in danger and I may be harmed if I return home,’ they’re taken off the [Transnational Organized Crime] watchlist. That makes it a giant loophole.” 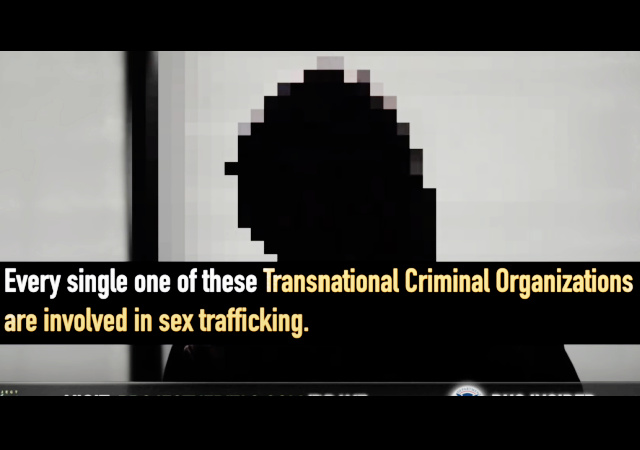 “Once an [illegal immigrant] informs the U.S. government that they have some type of fear, or that their life is in jeopardy, or they’ll be persecuted, or they may be tortured, they are put in what’s called the ‘reasonable fear [category],’” the insider said.

“Once [a migrant gang member] makes the declaration of, ‘My life is in danger and I may be harmed if I return home,’ they’re taken off the [Transnational Organized Crime] watchlist. That makes it a giant loophole,” they said.

If you are involved in a TCO the government puts you “on a watchlist with certain specific information regarding you as well as your activity,”

“So it’s not just, again, not just your name and date of birth,” explained the insider. “This will be your name, date of birth. There’ll be biometric information as well as fingerprints and facial photographs. You’re gonna have shared information coming from foreign governments, specifically with Transnational Organized Crime, or the TCO mission set, as it’s called.”

When you come into the country you’re put into the deportation process. If you tell the government you fear for your life or face persecution upon returning to your country they place you in another process.

An asylum officer questions you and determines if the reasonable fear argument applies to you.

“So this is not a DHS program, or a Justice Department program, this is the whole of government,” said the insider.

All the entities, including the State Department, become involved.

Once you make the declaration the government takes you off the watchlist:

“Some of these [migrant gang members] are encountered by Border Patrol and they’re asked right away, ‘Do you fear for your life if you are deported?’ They’ll say no, and then the next day they’ll say yes,” the whistleblower said.

“It’s almost like they are coached, ‘Hey if you get caught, just go ahead and say this.’”

The government does not have any “mandatory bars” but an immigration judge can decide against you if you have persecuted others, been convicted of a serious crime, a danger to America, etc.

I guess the government does not perform a thorough investigation. The DHS insider told James O’Keefe:

“This to me is a bigger problem than terrorism is right now within the country…Every single one of these Transnational Criminal Organizations are involved in sex trafficking,” the whistleblower said.

“Children are the most vulnerable population of any society. So, when you’re sending kids to a place with no family [accompanying them] – or when the only family or guardians [they have] are known gang members, they’re even more vulnerable.”

The insider shared a story about an 18th Street member, which he described as the equivalent of MS-13. 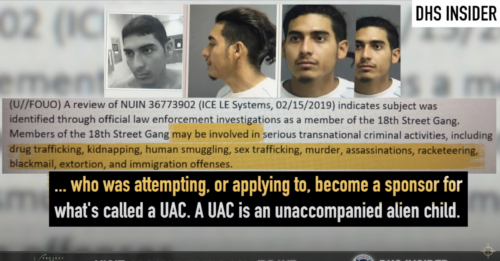 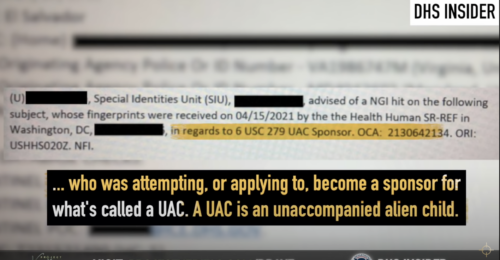 The insider provided papers showing the government giving the man the ability to work legally in America:

“These are the people that are causing danger in those foreign countries. That’s why they’re on the Transnational Organized Crime [TOC] watchlist. So, they are allowed to stay in the country while they wait for the asylum claims…They will be able to file for what is called the Employment Authorization Card. This essentially is a work permit, and they’re allowed to stay legally under the protections of this [permit].” 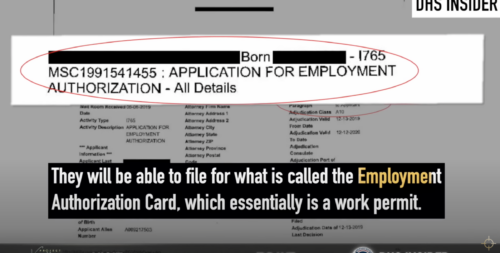 “Because a person that is a gang member should not be, again, believed over the entire watch listing apparatus that the government has,” stressed the insider. “And on top of that, what is the purpose of having a watchlist, if you’re able to see the person on the watchlist and then also just watch them get a work authorization card.”

Biden’s approach to the border infuriates the insider:

To hear the administration say things like, “It’s not happening, there’s no bad problems” and with the upcoming immigration bill I don’t think people understand just how bad it really actually is. There’s no way it was built to be successful. Because this isn’t a watchlist. This is more of like an actual list to watch. It doesn’t make actual sense.

Every single one of these Transnational Criminal Organizations are involved in sex trafficking.

The insider read through DHS’s primer on TCOs and it does not mention sex trafficking. Instead, the senior officials believe domestic violence extremists present the biggest threat to America.

It’s a no surprise to me sex traffic is on the rise of the illegals.
Another gift from the Democrats/Marxists

“Some of these [migrant gang members] are encountered by Border Patrol and they’re asked right away, ‘Do you fear for your life if you are deported?’ They’ll say no, and then the next day they’ll say yes,” the whistleblower said. “It’s almost like they are coached, ‘Hey if you get caught, just go ahead and say this.’”

What is ironically hilarious is that I have interacted for years with “political magic thinkers” like “sovereign citizens” and similar groups, all of whom think that if they carefully avoid ever responding to a document in which their name is entirely capitalized, always go pro se to avoid hiring an “officer of the court” defense lawyer, insist that they are a citizen of their state and not the “USA,” or challenge the jurisdiction of any courtroom with a yellow-fringed flag, they are immune from federal and most state depredations.

For years, I have tried to impress upon them Victor Milan’s observation that, “Imagining you can fend off Leviathan by waving papers in His face takes into account neither the nature of the individuals who make up the State, nor that of the system in which they operate.” There are no “magic words” that allow you entry to the evil wizard’s castle, under the universally-understood rule that evil is always required to leave one avenue open for the use of heroes.

And then kneejerk government crap like this happens, and I have to eat crow.