Rare earth metals in Afghanistan were estimated to be worth anywhere between $1 trillion and $3 trillion in 2020. 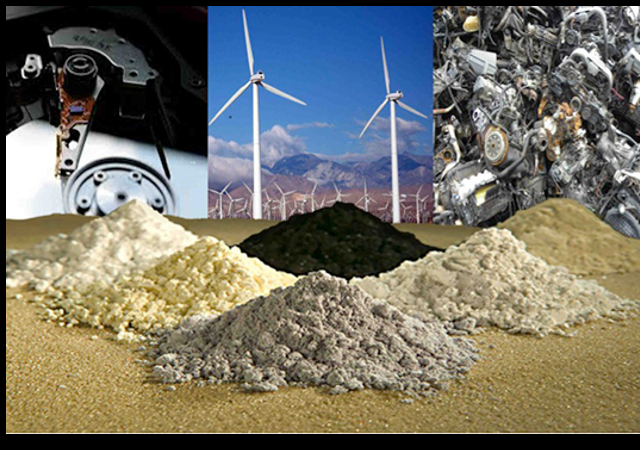 Rare earth elements are a group of seventeen chemical elements that occur together in the periodic table and have a wide variety of uses in the industry (e.g., smartphones, guidance systems, hard drives, MRI machines, optics, and hybrid vehicles).

Do you know what country has quite a bit available for mining? Afghanistan.

Thanks to Team Biden, China may be in a position to exploit the country’s resources.

Minerals and rare earth metals in Afghanistan were estimated to be worth between $1 trillion and $3 trillion in 2020, according to a report in news magazine The Diplomat, citing Ahmad Shah Katawazai, a former diplomat at the Afghan Embassy in Washington D.C. A report by American news organization The Hill earlier this year put the value at about $3 trillion.

…Afghanistan has rare earth elements such as lanthanum, cerium, neodymium, and veins of aluminium, gold, silver, zinc, mercury, and lithium, according to Katawazai. Rare earths are used in everything from electronics to electric vehicles, and satellites and aircraft.

“So there should be pressure on China if they are going to do alliances with the Taliban in order to generate economic aid for them — that they do it on international terms,” said Khan. She was responding to a question on the commercial motivation behind China’s nod to the Taliban a day after the militants took over the country — given the trillions of dollars worth of rare earths there.

Only hours after the Taliban overran Afghanistan, a foreign ministry spokeswoman said Beijing was ready for “friendly cooperation with Afghanistan.”

China has already said it would “contribute to post-war reconstruction and development, pushing forward projects under the China-proposed Belt and Road Initiative.” The CCP will target the resource assets, and given how it treats Chinese Muslims, I do not think Sharia Law or religious considerations will stand in its way.

Some firms have already seen the writing on the wall. Some electric car manufacturers are trying to reduce the amount of rare earth used in vehicles.

Western electric vehicle (EV) makers are trying to reduce their dependence on rare earth metals from China. As tensions rise between that nation and others, including the United States, makers worry that supplies might become limited.

Electric vehicles use special magnets to power their engines.

Most are made from rare earth metals.

The metals are not really rare. But they can be dirty and difficult to process. And, China has become the leader in producing them. Demand for the magnets is growing for all forms of renewable energy. Experts say a real shortage may lie ahead.

Some automobile companies have been looking to replace rare earth metals for years.

Automakers in the West say they are concerned not just about securing supply. They are also worried about huge price increases and environmental damage that happens during production.

…Companies trying to stop using the magnets include Japanese carmaker Nissan. The company told Reuters it is ending its use of rare earths from the engine of its new Ariya model. Germany’s BMW did the same for its iX3 electric sport utility vehicle this year. And the world’s two biggest automakers — Toyota and Volkswagen — told Reuters they are also decreasing use of the minerals.

Meanwhile, India (which has less than friendly relations with China) takes a different approach to its rare earth supply.

India has come up with a novel way of getting its hands on some rare earths – by junking cars.

Prime Minister Narendra Modi last Friday announced a Vehicle Scrappage Policy that aims to get junkers off Indian roads, with reducing pollution the main aim of the new effort.

… Rare earths are essential in the manufacture of electronics, but China dominates supply. Miners everywhere are working to find new sources as fast as they are able, but demand remains high.

Enter India’s fleet of junkers which, as Modi noted in his speech introducing the new Scrappage Policy, contain rare earths that can be recycled.

“When these rare earth metals that drive technology and that are available today will become rare, it is difficult to say,” Modi lamented. The new policy, he added, will bring scientific rigour to India’s metal recycling efforts.

It seems that the Biden Administration is a better ally to China than those nations and groups to whom America is supposed to be allied. Not only car manufacturers but national leaders are recalculating strategies and approaches.

A progressive alignment with the liberal facets of social progress: diversity, inequity, and exclusion of Uyghurs, women… feminine females, and babies, too. The land rape of sparsely distributed rare earths for the intermittent/renewable Green blight is a valued-added bonus.

I guess we don’t need any rare earth metals. Or if we do, we can just buy them from China.

I can think of several ways to put a stop to China mining. Also, minable rare earth minerals are not that rare, but getting them generally results in a huge environmental mess.

When the Chinese cut off Japan, the Japanese reduced the amount they used by 80%. That is one of the reasons y0ur new laptop does not have a whirring disc drive anymore. When the Chinese were selling them at bargain basement prices, manufacturers wasted and over used them.

Rare earths are not rare. They are just require 20 to 40 different acid baths to separate out. It is not high tech. Just tedious and environmentally harsh.

Most US users have a years supply on hand. Because, that would be the time it would take to spin up refiners in other countries.

China, and most of the rest of the world, is still rational, still in touch with reality, and still understands Realpolitik.

Woke America is irrational and out of touch with reality.

And clueless about Realpolitik. Because its racist, or misogynist, or colonialist, or patriarchal, or something something.

Afghans will be sewing Nikes by the end of the decade.

No may about it. The Chinese will descend on Afghanistan and pay the Taliban to provide security.

That’s why I’m puzzled by this statement:

“The CCP will target the resource assets, and given how it treats Chinese Muslims, I do not think Sharia Law or religious considerations will stand in its way.”

China may not care, but I would think that pissing off the imams would be a major (possibly fatal) policy blunder.

I wonder how long it will be before China discovers the limitless treachery of the Islamic world.

Afghanistan, even if touted as the “must win war” (even by people who were adamant opponents of the Viet Nam War bac in the Sillier ‘Seventies), was the ultimate unwinnable war. It was always an unstable stew of tribes, sects, and factions; our logistical trail went through a very duplicitous ally in Pakistan. It could not be bombed back to the stone age, because it was scarcely removed from the stone age.

To be honest: the Taliban-ChiCom relationship has a Hitler-Stalin pact kind of feel. It will be deadly for the US while it lasts, but I question how stable it will be long-term.

China will find the endeavor more difficult than it thinks. Who is actually going to get those minerals out of the ground? How will they get to China? The CCP is about to deal with a level of corruption and incompetence it has not dealt with previously. Best of luck, ChiComs [/sarc].

Reminiscent of the realignment of South Africa for minerals, Libya for oil, Ukraine for what purpose did that war serve?

They didn’t mention copper. There is a mountain of it that is pure enough that it has tarnished green. It also played havoc with electronic devices such as ground radar, satellite systems, and radio systems in that valley.

If the Afghans had any motivation or work ethic they could be providers of steel, copper, silver, lithium, sulfur, zinc, and coal. The rare earths are a plus as well as precious stones, gas, and oil. Instead their biggest moneymaker is the production of opium and hashish.

Read a post by a guy who said China was already in Afghanistan back in 2001 prior to 9/11. He was being flown in a rooskie HInd helicopter with some papers for someone.
Said he flew over some are that started with a G as I recall when he saw a mining camp that appeared to be of Chinese origin. When he went to google earth to check that section was blurred out.
In any case, you can bet Alaska probably has more rare earth minerals, we just need to send the greenie weenies to Afghanistan to halt their mining operations.
Kill two birds with one stone so to speak…..

How considerate of Google! It’s nice to know that in the war between good and evil, they never play favorites.

Flew over some area not are.

The USA likely has the second most valuable known deposits of “rare earth” metals, most of which are actually quite common…but in extremely low densities. China is first. It is extremely likely that in fact, Russia, Canada, Poland/Romania and Africa have much more. Other than Chile, the rest of South America is basically unexplored. Oh….and Chile is a power house. America simply no longer has the will power to survive. So we don’t mine and refine it anymore. The Democrats have sucked the life out of America with their pretend economics of neo-slavery.

Should have leveled Beijing in 1945, too.