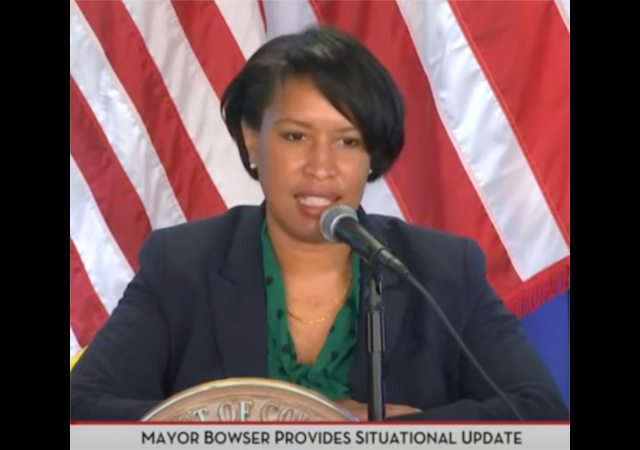 Washington DC mayor Muriel Bowser announced on Thursday that she was mandating indoor masking in DC . . . starting on Saturday morning.

Let’s stay in this together, DC. By masking up, we can protect our community and keep DC open.

It’s now come to light that she appears to have delayed the imposition of the mask mandate so she could enjoy a maskless birthday bash Friday night. To add insult to injury, she also had the temerity to violate her own mask order on Saturday when she officiated at a wedding reception with hundreds of maskless guests, including herself, in attendance.

There’s nothing wrong with wanting to enjoy your birthday party maskless. Heck, it’s the only way to go. But there is something really skeevy about insisting that there is a major public health crisis that requires the strong arm of government to keep in check . . . but naw, it’s not such a crisis that it can’t wait until after the tyrant’s big birthday bash.

Social media sleuths have discovered pictures of the mayor and her friends partying without masks in a seemingly well-ventilated though partly indoor space. This was not a small, intimate gathering, either: Comedian Dave Chappelle even made an appearance. Bowser turns 49 on Tuesday.

The mayor’s office did not respond to requests for comment from media outlets. Technically, Bowser didn’t break the rules—the new mask mandate had not gone into effect yet—and as long as everyone was vaccinated, this kind of gathering is quite safe. But this is still rank hypocrisy. At the same time that Bowser was partying maskless with celebrities, her Twitter feed was imploring people to “mask up” more generally.

When encountered by the Washington Examiner, Mayor Bowser confirmed that she officiated the maskless, indoor wedding, but when asked why she was violating her own mask mandate, her security retinue quickly escorted her away. https://t.co/hY0Ji2zqnj pic.twitter.com/xozhIupSin

Washington, D.C., Mayor Muriel Bowser celebrated her 49th birthday with a DJ and comedian Dave Chappelle, she officiated a wedding at The Line DC, a four-star hotel in the Adams Morgan neighborhood of the city.

Despite the mayor’s order, the wedding reception featured hundreds of unmasked guests served by dozens of wait staff, including a conspicuously unmasked Bowser.

Bowser responded to the growing backlash by essentially asking, who are you going to believe, me or your lying eyes?

Fox 5 received a statement from Bowser’s office which defended the mayor’s actions while officiating the wedding. It also insists Bowser did wear a mask inside, though the statement does not directly address the Examiner photo:

On Saturday, July 31st, Mayor Bowser officiated an outdoor, rooftop wedding ceremony, followed by an indoor dinner. The Mayor wore a mask indoors in compliance with the mandate, and the organizers and venue staff worked to create a safe environment for the staff and guests. The Friday, July 30th evening event called into question by conservative media was outdoors, on a rooftop. We continue to emphasize everyone should be vaccinated as soon as possible and to wear a mask at indoor public settings to protect yourself, your loved ones and your neighbors.

Except there is a photo of the mayor INSIDE without a mask. I've asked for a response on that, which does not align with the statement.

Instead, they issue these edicts, flout and ignore their own mandates, and then have the audacity to double-down on the “need” to mask for public safety.

Bring back the crack smoking mayor, he was at least what he said he was

What would be a quick way to get Covid under control and drastically reduce urban crime? Kick every black female Democrat mayor out of office, starting with Muriel Bowser.

Be quiet peasant the Mayor is allowed to remove her mask while she eats your cake!

The self-awareness of our current crop of “ruling adults” is nothing short of horrifying.

And they are in charge.

This crap, more than anything else, is why I don’t give two shits what the ‘experts’ and politicians have to say about this crap.

If this were one fraction as deadly as advertised and masks did jack shit, these people would have their bodyguards have a 50 foot protective bubble around themselves and they would be wearing multiple layers of protection.

Instead the second the cameras turn off, the masks come off. It’s bullshit and everybody knows it.

Been saying this for months now. If these officious a*holes really truly believed the effluvium that emanates forth from their pieholes, they’d retreat so deep in their bunkers that they would turn whiter than cave fish that hadn’t seen the sun for a hundred years. Instead, they go to weddings and French laundries and hairstylists while expecting the peasants to shut up and obey.

They apparently don’t realize how close they are to the pointy end of a pitchfork.

A “slave Trustee”. Nothing more, nothing less.

I liked her more when she was a white guy with Sha Na Na.

Almost all politicians and most bureaucrats are above the law now. Democrat politicians are above criticism for violating the law and Constitution. It is what we have become.

The Hill headline:
47 percent of Republicans say time will come ‘to take the law into their own hands’: poll

We can blame the left, the democrats etc., but the main reason we are in the position we are today is because of the corruption of the Republican Party.

What do you expect from someone named after a cigar.

I don’t get outraged anymore. It’s normal behavior for politicians.