“You call yourself a progressive?” the man who filmed NYC’s first couple asked. Yes, this is what actual progressivism looks like, where the rules are optional for the people in charge, but mandatory for everyone else. 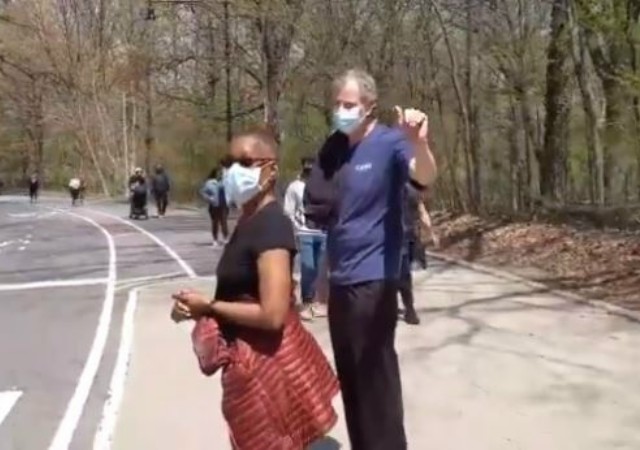 The man, who goes by @brooklyn_darren on Twitter, didn’t take issue with the fact they were out for a walk on a sunny day. The problem, he stated, was that they were 12 miles away from their Gracie Mansion home, which is already in the middle of a park.

The city has strongly discouraged vehicular traffic and has shut off many streets to make them more pedestrian-friendly on de Blasio’s order. Darren found it hypocritical that the mayor and his wife traveled with their security entourage to another part of the city even though residents have been firmly urged not to:

de Blasio opposes opening streets for all, esp 4 those who don’t happen to live near a nice park, aren’t chauffeured in fossil-fuel convoys to Park Slope

They tend to be poorer, working class, POC.

Darren unloaded on de Blasio for having what he thought were skewed priorities during a pandemic for someone who calls himself a progressive leader:

He claims to be a progressive & grifted onto @BernieSanders campaign. But BdB parrots talking points at a national level without understanding their meaning in his own context.

His actions tell us who he really is

Austerity for the working class, privilege for the ruling class pic.twitter.com/ueVQqT2vN3

Here’s the video Darren took of the mayor and first lady casually strolling, with de Blasio at one point waving at the camera. Midway through the video and continuing towards the end, you can see two women who are presumably handlers or security staffers for the mayor and first lady actually trying to stand in front of Darren’s camera to prevent him from following and filming.

There are specific points in the clip where it doesn’t appear that de Blasio and McCray are properly social distancing (which, according to the mayor’s rules, would warrant a call to the snitch line). At the end of the clip, you can hear Darren call one of the women out for allegedly not socially distancing far enough away from him as he filmed them:

You can’t change the past & will always have blood on your hands.

If I were you, I’d be working night & day to help those in most dire need. Maybe start with your inadequate homeless services. pic.twitter.com/i71ulg7Hvl

Another Twitter user made a gif out what was perhaps the most awkward/bizarre moment from the clip, where de Blasio was waving as Darren filmed the couple:

That one of him making insane faces directly into the camera had a good run but I would like to submit this for consideration as the new definitive BdB gif pic.twitter.com/le9safjjNK

During the video, Darren mocked de Blasio, saying, “You call yourself a progressive?” Here’s a memo for Darren: Welcome to what being a “progressive” is really all about.

It involves, among other things, not following the strict rules you put in place for the ordinary people. Mayor de Blasio has done this repeatedly throughout the Wuhan Coronavirus crisis in his city. He took a trip to his favorite gym on the same day officials told New York City residents o hunker down and a previous trip he took to Prospect Park just a couple of weeks ago.

De Blasio, of course, is not the only famous New Yorker who has flouted the rules put in place to slow the spread of the Wuhan Coronavirus.

CNN anchor Chris Cuomo who, like his colleagues, has routinely berated ‘stay at home’ protesters for not obeying their Democratic governors. However, he broke the rules in an Easter Sunday confrontation at his under-construction East Hampton home with a New York City bicyclist who called him out for not abiding by CDC guidelines on remaining quarantined while suffering from the virus.

ABC News “This Week” host and former Clintonista, who was also diagnosed with the Wuhan coronavirus earlier this month, was too caught breaking quarantine and was photographed in East Hampton out walking without a mask.

Again, one set of rules for them and another set for everyone else. This is what progressivism looks like, where the rules are optional for the people in charge and their prominent supporters, but mandatory for everyone else.

Out celebrating the millions more he funneled to his crooked wife.

But but but – by issuing those rules the Mayor proved that he’s one of the good people! He can’t be punished! He’s on the right side and everything? Don’t you understand???????

I don’t have any sympathy for Mr. “Progressive, socialist, bicyclist, feminist, environmentalist, globalist, he/him”. When you elect a Communist tyrant you can expect them to govern like a Communist tyrant. Sort of like inviting someone to take a dump on your couch and then complaining about the mess and smell.

Mayor de Blasio is a tool but they elected him so live with it NYers. Why does he need 4 Suburbans to haul him around. Is he really in danger in broad daylight in quarantined NYC? Here in MA, Make Dukakis, a terrible Governor but a pretty down to earth guy, used to ride the T to work every day as Governor.

Darren may be a bigger tool however, his posts a rife with SJW drivel.

We should take away all taxpayer paid security. It would definitely make the politicians think twice about their arrogant behavior.