“‘This is really the first time we’ve started seeing clustering of resistance’ in which patients seemed to be getting the infections from each other.” 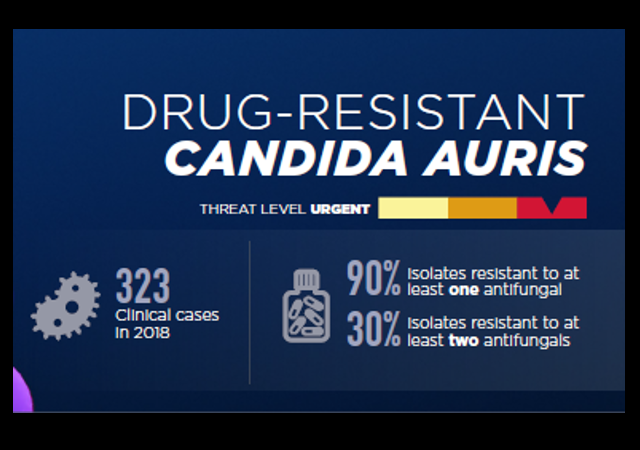 In 2016, I blogged that the Centers for Disease Control and Prevention (CDC) reported the first cases of a drug-resistant and potentially fatal fungal infection have occurred within the United States.

The fungus, Candida auris (C. auris), is known to occur in health care settings such as hospitals and nursing homes. Then, in the spring of 2019, I noted that the CDC warned of the ‘superbug’ fungus sickening hundreds across the country.

The agency said the fungus is spreading in two of the nation’s top cities: Washington, D.C., and Dallas, TX.

The “superbug” outbreaks were reported in a Washington, D.C, nursing home and at two Dallas-area hospitals, the Centers for Disease Control and Prevention reported. A handful of the patients had invasive fungal infections that were impervious to all three major classes of medications.

“This is really the first time we’ve started seeing clustering of resistance” in which patients seemed to be getting the infections from each other, said the CDC’s Dr. Meghan Lyman.

The fungus, Candida auris, is a harmful form of yeast that is considered dangerous to hospital and nursing home patients with serious medical problems. It is most deadly when it enters the bloodstream, heart or brain. Outbreaks in health care facilities have been spurred when the fungus spread through patient contact or on contaminated surfaces.

Candida auris is deadly if it enters the bloodstream, heart, or brain. It can spread through patient contact or contaminated surfaces.

Scientists have identified four different strains of the fungus, which emerged around the same time across the globe. Officials have found all four strains in the United States, which probably occurred through international travel and subsequent spread in U.S. healthcare facilities.

In 2019, doctors diagnosed three cases in New York that were also resistant to a class of drugs, called echinocandins, that were considered a last line of defense.

In those cases, there was no evidence the infections had spread from patient to patient — scientists concluded the resistance to the drugs formed during treatment.

The new cases did spread, the CDC concluded.

In Washington, D.C., a cluster of 101 C. auris cases at a nursing home dedicated to very sick patients included three that were resistant to all three kinds of antifungal medications. A cluster of 22 in two Dallas-area hospitals included two with that level of resistance. The facilities weren’t identified.

Those cases were seen from January to April. Of the five people who were fully resistant to treatment, three died — both Texas patients and one in Washington.

Lyman said both are ongoing outbreaks and that additional infections have been identified since April. But those added numbers were not reported.

Investigators reviewed medical records and found no evidence of previous antifungal use among the patients in those clusters. Health officials say that means they spread from person to person.

C. auris causes infections of the bloodstream, wounds, and ears. Like other Candida infections, doctors usually diagnose C. auris infections by blood culture or other body fluids.
People who have recently spent time in nursing homes and have lines and tubes in their bodies (e.g., catheters) seem to have the highest risk for infection.

C. auris reports come from Washington, D.C., and Dallas. But we have reports of infections with this fungus across the country.

California, Florida, New York, and Illinois are all hotspots for the fungus with over 100 cases identified during that 12-month period.

Let’s hope the response to this disease is more successful than the one we have been experiencing with COVID-19.

And while it is a concerning development, I would be far more anxious if this fungus had originated in Wuhan, China.

I remember reading in my research on spike proteins that those who have taken the “jab” would be more susceptible to fungus infections. Wonder is this is coming into play here. Not for the spread as much as for the fatal aspect. Thoughts anyone?

Even if it is, political and media pressure will be brought to bear to deny and minimize it.

(Dammit LI, thanks for the Tony Orlando earworm.)

With their record of incompetence and dishonesty, I’m highly skeptical of ANY information propagated by the CDC.

Out where I live, we’re lucky to have *A* hospital. It serves 3,300 square miles and has a busy helicopter.

The NYTimes had a couple of stories about Candida Auris back in April 2019.
It told of hospitals using a hydrogen peroxide misting procedure to disinfect hospital rooms leaving Candida Auris still intact and alive.

The NYTimes story also mentioned that all four strains seems to be related, but the first mutation must have happened like 10,000 years ago.

Maybe for a fungus. My final deployment was as a Fobbit in a Div HQ. Despite the ability to wash ones own clothes using their own special soap a vocal minority decided to whine about minor skin rash from the consolidated laundry facilities choice of soap.

Admittedly it was not a hypoallergenic or gentle soap. The complaint led to the facility being ordered to stop using soap and simply increase water temp to sanitize.

Problem was they put three to five persons laundry in the same machine. We used mesh bags and were limited by item count and weight to allow for this.

Govt contractors aren’t exactly 100% reliable in the best circumstances. Here they were using non potable water and zero soap. Result was widespread contamination and mass outbreak of the ‘Baghdad Boils’.

I had a persistent battle through four separate and increasingly stronger antibiotics regimens lasting over a year post deployment. Not including the joys of medics cutting, carving, draining and packing gauze into the remarkably deep sites. Some nice scars even.

I was far from the only one. So many were impacted that the VA studied whether to add this to it’s presumptive list of conditions. Your government dollars at work in the hands of people who make stupid decisions.

I hope that nasty goat fungus that is going around is still treatable.
https://me.me/i/my-cousin-came-down-with-a-case-of-that-nasty-14881421

Is the influx of illegals playing a role in this?

It surely doesn’t help, though keep in mind that the monkeypox that just came in came in riding a traveling US citizen.