CDC reports the first US cases of deadly “super-fungus”

CDC reports the first US cases of deadly “super-fungus”

Candida auris: A drug-resistant yeast with a 60% mortality rate. 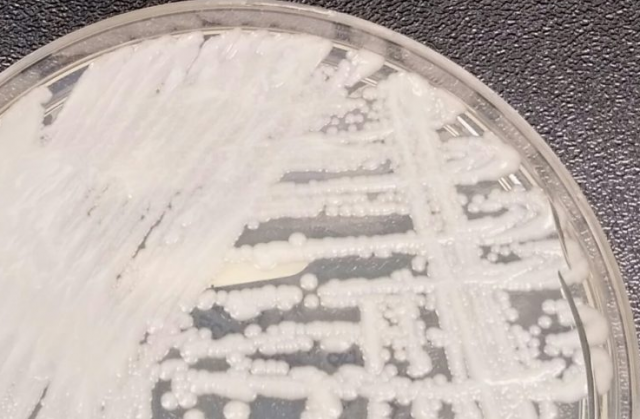 The Centers for Disease Control and Prevention (CDC) is reporting that the first cases of a drug-resistant and potentially fatal fungal infection have occurred within the United States.

The fungus, Candida auris, is known to occur in health care settings such as hospitals and nursing homes.

Seven cases occurred between May 2013 and August 2016 in four states: Illinois, Maryland, New Jersey and New York. As of August 31, four of these seven patients, all with bloodstream infections, died, though it is unclear whether their deaths were due to C. auris.

The remaining six cases were identified after August and are still under investigation.

“It appears that C. auris arrived in the United States only in the past few years,” Dr. Tom Chiller, chief of the CDC’s Mycotic Diseases Branch, said in statement. He added that scientists are working to better understand the fungus so they can develop recommendations to protect those at risk.

This fungus has been classified as an emerging pathogen and was isolated in Japan in 2009 from the ear canal of a patient who fell ill. Further study revealed a sample of the fungus from a South Korean patient from 1996.

Infectious disease experts indicate that it has spread globally, through at least nine countries and four continents.

The “auris” portion of the species name refers to the ear. However, when this yeast enters the bloodstream and spread throughout the body, it causes causing serious invasive infection that do not respond to commonly used antifungal drugs. The mortality rate for Candida auris infections stands at 60%, however a contributing factor is that may of those who contracted the fungus have underlying health issues as well.

The feature of Candida auris that is of most concern to medical experts is its “epigenetic clustering“, that makes it readily adapt to a wide-array of anti-fungal agents. And like other forms of Candida, this fungus is easily contractible, entering a person’s body through the mouth and other orifices from infected surfaces and other people.

Hospital settings in which people with weakened immune systems congregate have been the most recent setting for significant outbreaks. For example, an I.C.U. in a London hospital was forced to shut-down this summer after patients came down with sever, drug-resistant yeast infections.

…The world-famous Royal Brompton Hospital (RBH) in London was forced to close its ICU for nearly two weeks back in June, after at least three patients died from multi-organ failure, a believed-to-be result of C. auris infection. Though the link between the three has yet to be definitively determined, the hospital decided to take a precautionary approach by transferring out its sickest patients and deep-cleaning the entire facility.

At least one patient at the hospital known to be carrying C. auris is now being treated in intensive care, as are two others who were colonized with the fungus, though they’re being treated in a separate room from the infected patient. Meanwhile, other patients in need of surgeries and other care are having to wait until a plan of action is determined.

There has been recent calls by scientists to take fungal infections more seriously.

More than 1 million people die each year from fungal infections, more than from malaria or breast cancer.

“Most people know about mild fungal infections, but nobody’s ever died from athlete’s foot,” said Professor Neil Gow, Ph.D., director of research and commercialization at the College of Life Sciences, University of Aberdeen, in Scotland, in an interview with the BBC.

Gow said although such infections lead to so many deaths, there are no antifungal vaccines.

“We need to understand these different types of infection and how to deal with them,” he told the BBC.

Candida auris may make those who fund medical research rethink their priorities.

Think illegal immigrants from Middle East and Central America…
We don’t need no health evaluations…
Like the mysterious polio like virus paralyzing children across America, nothing there, no treatment, just happen to show up with influx from Cents America..
Go ahead, vote for Hillary…this is what you get..
It’s only your children’s lives…

Clinton has it. It is clear in the photo of her collapsing at the 9/11 ceremony. KEEP UP.

Do away with the CDC. It is a waste of money. If we just deny Candida exists, we don’t need to worry about it.

Fuzzy Slippers in reply to OnlyRightDissentAllowed. | November 5, 2016 at 4:23 pm

This is one of the more annoying rhetorical habits of the progressive left. There is no “either/or” binary thinking in real life. You guys are great about that on gender (where there actually is a set definition), but when it comes to thinking, actual critical thinking, you just fall back on tired junior high school fallacies. We just get rid of the CDC or we let it stumble along as the bloated bureaucracy it is. OOOH! Or we just toss more money at it, and then it will work better! Woot!

Have you so little imagination? Can you think of nothing–nothing at all–that might fall between these two extremes?

We can. Listen to us, you might learn a thing or two.

I was satirizing the know nothing position on Climate Change. I have respect for the CDC – if for no other reason than that the CDC is living proof that the someone can say “We are from the government and we are here to help you”. No, they are not perfect. Who is? I know you guys were all hysterical about Ebola and quick to criticize them. Turns out that the CDC did a pretty good job on that. I haven’t seen any followup articles thanking them.

As for your generalizations – stow it. They are straw man fallacies and undermine your point. There are no “rhetorical habits of the progressive left”. There are such habits in ideologues of any political stripe. I am not one of them.

Meanwhile one fool here writes “illegal immigrants from Middle East and Central America”. That is interesting considering that the article says the fungus came from East Asia and has been identified in London, England. Are we going to build a wall around the whole country?

Ooh! Ooh! An opportunity for an online poll!

Which will be the first to blame Trump?

I don’t know. But in the very, very first comment to this piece, gonzotx blamed Hillary. Check it out Swifty. Use your incredible reading machine.

The most deadly form of Super-fungus – leftism – has been around for over 100 years.

100 Years? I wonder who did all the killing before that?