Mayors Durkan and Bowser spent a year demonizing the police. Violence has soared in their cities. What a coincidence. 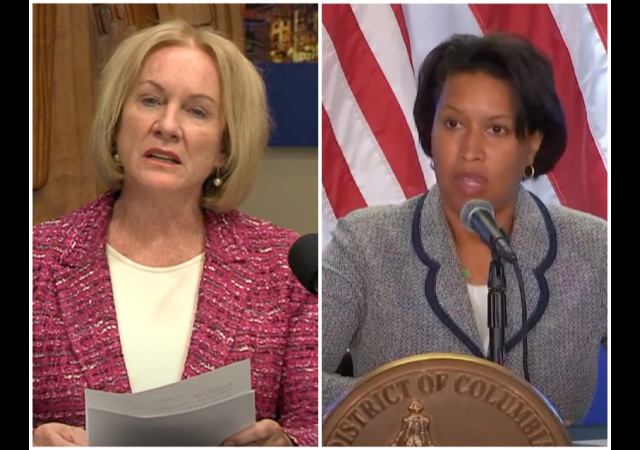 No one saw this, right? Who would have thunk!?

Seattle went on a downward spiral after George Floyd’s death. People set up an autonomous zone as Antifa tore apart the city at night.

Mayor Jenny Durkan dismissed the riots and autonomous zone. She even thought Seattle “could have the summer of love.”

A year later, Durkan wants the city to rebuild the police department since it saw six shootings last weekend.

Durkan said the Seattle Police Department lost 250 officers in the past 17 months. She has not completely stopped trying to cater to the far-left who hate police:

“We are creating meaningful alternatives,” Durkan said in reference to efforts in the city being made to redirect funding and manpower to community based groups. “But, as I said last year, the city has an obligation to still continue constitutional policing and respond to 911 calls.

“It is a false choice between community-led solutions and police officers,” Durkan said. “We need both.”

The mayor said she will be submitting a plan to hire more police officers and rebuild the depleted force.

“Not unexpected, losing these number of officers, when city leaders talk about cutting the department by 50%,” Durkan said. “You will lose employees. Families need security. Workers, even police officers, need working conditions that support them. We cannot just cut. We need a plan.”

The King County Prosecutor’s Office said the county had 33% more shootings this year “compared to the same period between 2017 and 2020.”

The number of people shot rose by 61% in that same time period.

Maybe don’t demonize the police department? Durkan vetoed a law enforcement defunding resolution from the city council but did not stand by the officers.

D.C. Mayor Muriel Bowser skirted the “defund the police” question last year. She told NPR her city council “doesn’t fund it a penny more than we need and certainly not a penny less.”

Well, in June 2021, Bowser said she wanted to “spend less money on police and nearly triple spending” on alternative programs.

It took a month for Bowser to change her mind. She asked the city council to add $11 million to the police budget:

A police budget reduction of $15 million in fiscal year 2021 harmed police recruitment, she argued. MPD usually brings on about 250 new officers per year. This year, they’ve had only 42 uniformed hires.

Bowser made me laugh: “Last year, unfortunately, we saw a $15 million reduction in [the police] budget and because of that reduction we have not been able to keep the hiring pipeline in full effect.”

Yeah, you had something to do with that, Mayor.

Bowser also asked the federal government to reopen all of the courts so they can tackle the backlog of over 10,000 cases. The government needs to fill 12 vacancies on the D.C. Superior Court. Over “2,000 cases await charges by the U.S. Attorney’s Office.

The district has seen 111 people die in homicides this year. The department has only hired 42 new officers this year.

But not the voters.

“But not the voters.”

Rats are capable of lying and pretending to learn.

Rookie cops are just as naïve as other recent college or trade graduates.

Be careful: the only ones left to do ‘policing’ will be the democrat goons.

Politicians can flip flop in a minute but building trust Within a police department takes years. Good luck restoring what was broken in one summer by defund the police and BLM.

You’re right. After the way she’s treated the police, finding good candidates to rebuild with may be nearly impossible. Instead, they’ll get the wannabes and losers who can’t get a job with a decent PD. That will not help end this self-inflicted disaster.

You can cut down a forest in a week. But, it takes considerably more time to regrow it.

The DC court backlog is going to take a long time to clear, not just because of judicial vacancies in the Superior Court that require Senate confirmation, but because the DC jury pool is so small. There are quite a few people who live in DC and do not qualify to serve on a jury because of age (ie. they’re minors), they’re not DC residents because they’re eligible to keep their out-of-state residency or they work for foreign governments, or they are disqualified because of their criminal records. Plus someone who has served on a jury can’t be called again for 2 years.

I suspect there will be a lot of plea deals offered.

The first time Tucker Carlson came to my attention, it was for a 1993 WSJ article about the DC police department hiring felons. An unintended consequence of their mid-70s “residence requirement” for officers was that they disqualified most of the pool of applicants with clean records who could get passing scores. Rather than rescind the requirement, they just applied an AA factor to the scores and then hired the felons.

The article is a total classic. I don’t think you can find it on the web today, but I still have it.

Since you effectively have no laws what laws would be enforced?

The ones that keep the violence at a distance from the mayor and the city council, of course.

Ex Senator ‘Senator’ Boxer getting mugged in California was enouraging. Now, if only the muggers in DC get the message.

Just this week, a bunch of new laws became effective in WA state. They make it easy to sue cops personally, and they raise the threshold for legal stops from “reasonable suspicion” to “probably cause.” If you call 911 and tell them someone just shot you, and the cop sees someone matching that description running from the crime scene, he cannot stop that person.

Cops also cannot use force in mental cases to get the person into a mental hospital. Actually, that’s not so bad, because cops hate going to mental cases. But now, they can’t intervene until the mental person assaults someone.

My son-in-law is a cop here in WA, and he and many of his fellow officers are considering a career change. It’s much worse for the cops in Seattle. Anyone who applies in Seattle is just doing it to get Seattle to pay for their time in the police academy. Then they lateral out as soon as they can do so.

Hiring more police won’t fix anything if the city doesn’t rescind the policies that put impractical limits on what they can do or if the criminals they arrest are immediately released and never prosecuted.

Why would anyone want to work for these progress fascists. They will throw them to the wolves when they decide it’s politically advantageous.

In Washington: to be accurate, it’s been more the Seattle City Council and the Seattle prosecutors office as well as the county prosecutor AND the state AG in Wa.

Durken has been a walker towards destroying the police while the rest have been going at a full sprint.

The state has lost its collective mind. Under new use of force laws- a murder was commited in Puyallup and police could not pursue the suspect who recently fled because of the restrictions. They had a K9 onsite capable of tracking him down, but couldn’t use it. So yes- its barely been a week and someone has gotten away with murder under the new laws.

Antifa and BLM veterans will fill the vacancies. Remember Brown Shirts, Red Guard?? they will be policing your neighborhoods soon.

Dhimmi-crat apparatchiks are truly the dumbest, vilest, most useless and most hypocritical narcissists, around.