The nuclear facility near Tehran was reportedly hit by an explosive-laden drone on June 23. 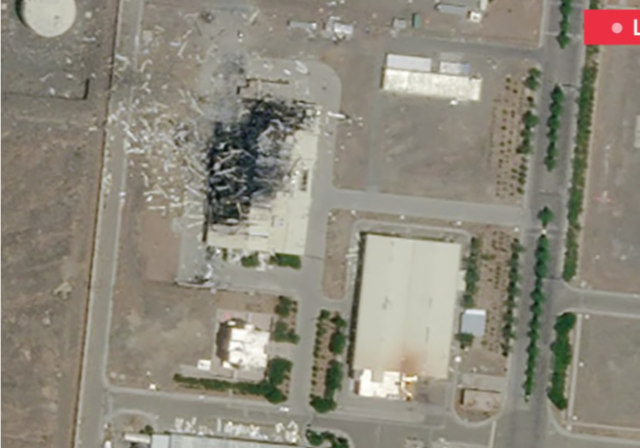 The roof of the building appears to be “missing,” and “black coloration” is inside the structure — suggesting a fire or an explosion, the Israel-based independent intelligence company The Intel Lab confirmed.

As President Joe Biden’s administration initiated talks with Tehran in hopes of restoring the Obama-era nuclear deal, the Karaj facility had been busy rolling out most advanced nuclear centrifuges to boost the regime’s production of near weapons-grade uranium.

According to Nournews, June 24th, 2021 "Security forces have managed to foil an act of sabotage against one of the buildings of Atomic Energy Organization of Iran (AEOI) in Karaj, Alborz province". Satellite Image from July 1st tells a different story. #Iran #Nuclear #JCPOA pic.twitter.com/QTAqTml4HT

The Times of Israel reported the findings of The Intel Lab:

Private Israeli intelligence group The Intel Lab released satellite photos on Saturday of what it said is damage from a reported drone attack on an Iranian nuclear facility last month.

Iran claimed to have foiled the June 23 attack on the site in Karaj, but Israeli media reported that the facility — said to have been used for assembling centrifuges for uranium enrichment — was damaged in the strike.

The drone attack reportedly hit the Iran Centrifuge Technology Company, or TESA, in the city of Karaj, northwest of Tehran. The TESA factory was tasked with replacing the damaged centrifuges at the Natanz nuclear site and also produces more advanced centrifuges that can more quickly enrich uranium, according to a New York Times report last month. (…)

A small quadcopter drone was used in the attack on TESA, the New York Times report said, citing an Iranian source who was not identified. The drone was apparently launched from within Iran, not far from the site, and succeeded in hitting the target, according to the Iranian source familiar with the incident, the report said.

The Iranian regime downplayed the damage to its nuclear weapons site, calling it ‘roof damage’ despite the undeniable visual evidence. “We have had no damage to equipment. There was small damage to a roof and the (satellite) pictures were taken when the roof was removed for repairs,” regime spokesman Ali Rabiei told state media.

In related news, reports indicate a “large fire” near the Karaj nuclear facility today. Regime-run, “Tasnim News Agency, reported that the fire was near Karaj, the city where an alleged attack targeted a nuclear facility reportedly used to produce centrifuges,” The Jerusalem Times confirmed.

The Mullah regime continues to minimize the severity of the attacks on its illicit nuclear weapons program and ties to Israel’s blame.

Israel expects Biden to stab them in the back just like Obama did. And the UN is more rabidly anti-Israel than ever before. So Israel is on their own, just as they have been many times in their history.

A couple of nukes would wipe out Israel. Israel must do whatever it takes to keep Iran from getting those nukes. Biden and the UN will complain about whatever tactics Israel uses to stop Iran, but Israel must go ahead and prevent this existential threat.

Unfortunately without BIbi, they don’t have the leadership willing to do whatever it takes
This is probably Mossad going rogue..

I bet that location is hotter than Chernobyl ever was.

These are centrifuges before they are used, so probably not. However, it would have been a prime location to deploy either radioactive taggants or secret nannites designed to sabotage future use. (Now I have this mental image of the Iranians going through the entire mess with microscopes for the next six months, looking for hidden nannites.)

When a US inspector toured the Libyan plant that was decommissioned by agreement (which Obama and Hillary violated later), he physically touched the components assuring that even so small amount of sweat or oil would render the parts unusable… so little can make the ultrahigh speed centrifuges unstable.

I hope so, every one of their neclear sites should be hot enough that it will be centuries, if not much more before they can access them.

Remember when Iran was normal, I do. That could happer here. Iran’s current government has to be destroyed, so do our Marxists.

I’m sure that no matter what else happens, we know the Israelis had absolutely nothing to do with this. *nudge nudge* *wink wink*

Biden’s handlers will help their Iranian pals build back better.