Lindell said the commercial didn’t specifically mention election fraud but admitted the event would prove Trump lost in 2020 because of voter fraud. 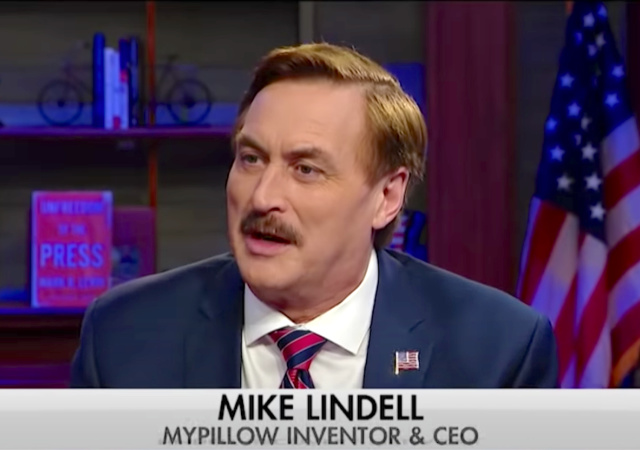 MyPillow CEO Mike Lindell pulled all ads from Fox News after the network did not accept a commercial about an online symposium:

Mr. Lindell said he wanted to cancel the ads as soon as possible and that he had told his ad buyer to inform Fox News.

Mr. Lindell said he had asked the network to air a commercial promoting a cyber symposium, which he is scheduled to live stream next month. Mr. Lindell said the commercial wouldn’t specifically mention claims of election fraud. But he has said the symposium will prove the 2020 election was stolen from then-President Donald Trump through manipulation of election machines.

“If there are any stragglers today, it’s a fluke,” he said.

Bed Bath & Beyond and Kohl’s stopped selling MyPillow and other Lindell products. Lindell claimed his company lost 40% of their business in January and February.

Fox News said: “It’s unfortunate Mr. Lindell has chosen to pause his commercial time on FOX News given the level of success he’s experienced in building his brand through advertising on the number one cable news network.”

It seems like political censorship to me – Fox is afraid of leftist reaction.

It isn’t censorship to say “Look from Tucker Carlson to Brett Baier all of our people looked into these claims and determined the Kraken is a myth so we don’t want to promote it” Fox is not a public square it is a publisher.

I see Fox’s trends as trying to play the long game to one day evolve the cable programming to be more CNN or MSNBC like. Gradually ease into it. And allow the internet subscription service be the place for those they piss off. Fox Nation or whatever they call it.

Anyone who has watched Tucker Carlson knows that just isn’t true.

The PTB who run Fox News are not afraid of leftist reaction. They’re NeverTrumpers and lefties themselves.

There are limits to how much they’ll tolerate just to make money off the deplorables and rubes and Trump supporters in flyover country.

They will not support or report anything about election fraud and the stolen election. That’s where they draw the line.

Fox is personified by the likes of McConnell: a fair-weather friend.

You mean personified by the man who stopped 100% of the Obama agenda from the moment he had authority to do so (2010) to the moment Obama left office?

Great hopefully they manage to do it again during the Biden administration.

Dude that doesn’t seem close to being true. However I will offer you an opportunity to explain your position and refrain, for the moment, any name calling or question your motives.

Please tell me how the following Obama agenda items have been stopped;
1. Obamacare
2. A politicised IC and DoJ, which treats r and d differently in both investigation and prosecutions and punishment
3. A politicised Treasury/IRS withholding or delayed approval of tax exempt status for conservative organizations.

Start with those three and carefully explain why all three don’t happen today.

You have zero support for your claims stop gatekeeping that only people who do not acknowledge the result of 2020 are Republicans Fox is not Never Trump it employs a couple of leftists and mostly conservatives some like Tucker Carlson are making a big difference.

After four years of nonstop “Russia Russia Russia” and “Not My President” tantrums they want us to shut up about election fraud….especially after not finding one single person that will admit to voting for Biden?

Fox was where you could turn to for opposition to that.

Unfortunately I know a lot of people who voted for xiden

I only know of five

Fox once again showed that it is controlled opposition that is afraid of the left.

Bill O’Reilly pretty much said that not too long ago in a phone interview with Mark Simone.

If you like the Bush and National Security State shill better than Tucker Carlson may I ask why?

The people who run Fox News despise their viewers. They pander to them only to make money.

In that way Fox News is no different from the GOPe of the last 30 years.

I walked away from Fox News when they called Arizona for Biden. I haven’t been back. And I will not go back.

I no longer trust Fox News. And I will never trust it again.

Chris Wallace is the true face of Fox News. He represents what they really are and think.

Fox News PTB have decided they will not cover any news that casts doubt on the validity and integrity of the election. And now we know that’s where they draw the line on ad revenue.

The PTB at Fox News tolerate shows by Tucker, Guttfield, and a few others, despite Chris Wallace’s disapproval, because they bring in the bucks. My guess is that’s what they tell their elitist friends at the DC, LA, and NYC cocktail parties they attend.

If I want to know what Tucker has to say I can find clips, transcripts, and summaries all over the internet. I don’t need to tune in to Fox News for that.

Could you produce something Rupert Murdoch actually said that supports your claim?

“I walked away from Fox News when they called Arizona for Biden. I haven’t been back. And I will not go back.”

Me as well. They can all go to hell.

You do realize they called Arizona correctly don’t you? I like News organizations like Dailywire and Fox that don’t lie to me because they think it is what I want to hear.

They did not call Arizona correctly. At the time there was no objective basis for calling it; the result was very much up in the air, and remained there for some time.

More importantly, FOX inexplicably reported a Dem wave in congress, which did not happen at all. And it refused all night to retract that.

I don’t remember any calling of congressional democrats gaining seats, if they did that that would likely be the reason they fired the guy responsible for making calls (I had thought it was over Arizona before just now so I’m glad you brought that up, I watched the results on Dailywire not fox so didn’t know about that).

Every news organization has metrics they use for calling states, and Fox thought those metrics were met when they called Arizona.

I haven’t had the TV on since the Wallace/Trump debate. Prior to that, I watched FNC off and on.
Until they get rid of Wallace, Geraldo and a couple other idiots, they have lost me.
Tried to fire up the TV and give Newsmax a try. The set top box seems to have died. Oh, well.

Newsmax has apologized for spreading the Kraken story

I never met Mike Lindell but he is someone I like because of his inspirational personal story and the fact that he seems to take great joy in manufacturing his products in his state and sounds like he is in heaven when advertising them (lots of people make good products).

But sometimes people you like who are on your side politically are wrong and it is right to try to do an intervention for them. Refusing to continue shilling for Sydney Powell (or in the case of Fox never shilling for her in the first place) is one such thing that has to happen.

Claiming an election you lost was stolen is a giant F you to the people who voted against your side. I felt that the RUSSIA RUSSIA RUSSIA was a F you to me personally.

Want to replicate that show of force against Trump?

Go get big tech, corporate media, social media, the institutions, the federal departments, and cultural institutions on your side to push baseless claims.

The Kraken is a Republican Russiagate the only difference is we are pushing it without power (and we are coming across as disgusting to winnable Biden voters as a result).

Say what you may about Lindell–he puts his money where his mouth is.

Have a couple of his pillows. Note to self–give his sheets and towels a try.

The towels are GREAT! Especially the huge “Bath Mats”.

My wife has ordered sheets and towels to go with the pillows we already owned. They are very nice, high end quality with a fair price.

Fox can run or not run what they want. This guy can pull his ads if he wants. The question is why they decided not to let him run the ad.

Because it is a news organization and the entire Kraken/Sydney Grifter Powell stuff was grade A BS and they correctly don’t want to destroy their credibility.

Tucker let him on his show but only as (in Tucker’s own words) a show of force against him being censored. They have no obligation to actively promote the Kraken BS.

These sorts of ideological purity tests are a stupid distraction. I would wager that no two people who comment on this site agree on the solutions for every problem.

Hell it’s doubtful that any two people could agree on what the problems are. Even then they would disagree about the order of importance for any list of problems.

Neither Fox nor Lindell are our political enemies. Neither of them march in lockstep with my beliefs. That is just fine. Each to his own.

How about we each agree to confront our political enemies; the d/progressive and their media allies, in the manner and with as much ferocity as we think appropriate and get out of each others way while we do so?

Totally agree. You and I (FWIW) don’t agree on some things but we do on most. Same for other commenters. That’s the way it’s supposed to be.

BTW, are you prior service? If so, that would explain a lot of what I read from you. Great minds, etc.
.

My experience differs. Some great people and memories that I wouldn’t trade. However, multiple deployment to the sandbox and other lesser known areas of conflict with no clear will by our political elites has left me cynical.

Not to mention combat injuries that forced a disability pension and early retirement. Though that does leave my days free so that I can catch up on my reading and post here.

Agree as well. We need to concentrate on the real, obvious threats to our freedoms.

I’m disappointed with Lindell for giving an interview to CNBC, however. CNBC is obviously and emphatically biased, as opposed to Fox, which is more subtle in its biases.

Lindell has put his money where his mouth is. Whatever else you think, give him credit for standing on principal. He’s losing money for standing up to the corrupt.

Presently, 13 of 38 comments are Danny spam.

And I get censored.