Avenatti still faces a load of tax and bank charges in California. That trial should begin next week in a CA federal court. 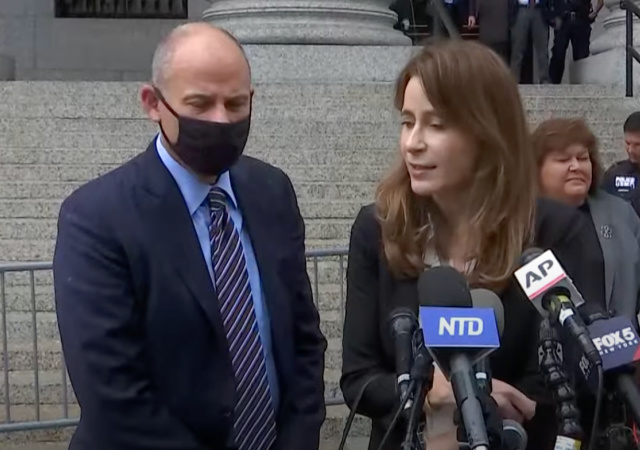 Michael Avenatti, the disgraced foe of former President Donald Trump, sobbed as Judge Paul Gardephe sentenced him to 2.5 years in prison for trying to extort millions from Nike.

A grand jury indicted Avenatti in March 2019 for trying to “extract more than $20M in payments” from Nike “by threatening to use his ability to garner publicity to inflict substantial financial & reputational harm on the company if his demands were not met.”

(You can read our previous coverage of the Avenatti-Nike case HERE.)

Federal guidelines suggest up to nine years in prison. Prosecutors asked for a “very substantial sentence.” Avenatti’s lawyers asked for only six months.

’He hijacked his client’s claims, and he used him to further his own agenda, which was to extort Nike millions of dollars for himself.”

But Gardephe added that Avenatti deserved a lighter sentence than what was recommended by federal because, the judge said, “Mr. Avenatti has expressed what I believe to be severe remorse today.”

The judge also cited the brutal conditions in which he was kept for several months in a Manhattan federal prison after his 2019 arrest.

Gardephe also sharply noted, in justifying the lower-than-recommended sentence, how federal prosecutors had not criminally charged high-powered attorney Mark Geragos, whom prosecutors have said participated with Avenatti in the shakedown.

Avenatti, who started crying during a statement to the judge before he was sentenced, said, “I am truly sorry for all of the pain I caused to Mr. Franklin and others.”

That was in reference to Avenatti’s amateur basketball coach-client Gary Franklin, who he exploited in his audacious bid to get paid directly from Nike in his shakedown plot.

“I alone have destroyed my career, my relationships and my life. And there is no doubt I need to pay,” the 50-year-old Avenatti told Gardephe.

At one point, Avenatti broke down and took several moments to compose himself as he spoke about the effects of his conduct on his three children.

Avenatti shot to fame when he represented Stormy Daniels when she accused Trump of paying her off to stay silent about their alleged affair.

“Attempted extortion”. So he will be going to prisonfor a crime he didn’t commit. Are they now awarding Nobel Prizes for attempted chemistry?

(Yeah, I stole that from Sideshow Bob.)

Attempted extortion, like attempted murder, is a crime, and he committed it.

You have the sense of humor of a pile of rocks. Lighten up.

Pelosi should join him:

“At one point, Avenatti broke down”

Has he been taking acting classes?

Probably not – he’s a narcissistic putz, and the thought of going to prison a ruined jackass made him cry. His crying shows his only remose is that he got caught.

He also probably thought that every sexual position Stormy Daniels has been filmed in could soon be a peek into his own future in prison.

the former CNN presidential front running sure fell from grace.

I wonder how hard Tater took this news.

2.5 years is for this case. How many for his other criminal enterprises?

Democrat tears — greasing the wheels of liberty since 1865.

More likely to rust the wheels, no?

This is the real face of hubris.

Glad he’s wearing a mask outside. That’s a compassionate human being.

Much like people use surgical masks to hide their identities from hidden cameras and the police, this guy is using it to camouflage his shame,

To bad Geragos isn’t going to be his cellmate.

Poor marxist311, Avenatti let you down. He was going to be your next president, remember…

We warned you, and you didn’t listen.

You use the word ‘We’ a lot, do you know what my political position actually is, what my view on the case at the time actually was.

Then there is the honesty aspect, A man previously viewed as ‘good’ now is discovered as being ‘bad’ correspondingly people have changed their view on him with the facts available. Can you say the same? Indeed lets take a polar opposite example Bill Barr. Many on the right loved him, thought he was great but as soon as he pointed out that actually there isn’t any evidence of election fraud then all of a sudden he is a traitor. That’s position stinks of dishonesty and cognitive dissonance.

Your savior Avenatti is just a common criminal.

Poor Stormy can’t even get a dozen to come and see her shows.

So does this mean that Mikey Avenatti will also have his law license revoked by emergency decree now that Mikey is a convicted felon heading to prison? Or will he get a pass and be able to keep his law license and bar qualifications unlike Rudy Giuliani who had both revoked simply for speaking his mind. Just wondering.

He’s under interim suspension as a result of the conviction (and other allegations), and there should be a summary disbarment. However, maybe the Bar Court will consider the “brutal conditions” of his confinement and just suspend him for a couple of years. (Other prisoners held in the same facility at the same time couldn’t be reached for comment.)

I hope his cell mate calls him Stormy.

Question: What’s the difference between Avenatti and Stormy Daniels?

Crying because he didn’t have the political connections to get him out of it when he got caught.

No one wants to see her proform. But she couldn’t draw a crowd years ago either .

Tears of joy at getting only 2.5 years and ducking the 9-11 year sentence the prosecution wanted. And that he should have gotten.

Jeez, I seem to remember a former commentor, a neverTrumper, that stated Avenatti was a respected lawyer….

He of the legal profession himself. Pierre something or other I think.

To be fair so was Giuliani 😉

Marxist is full of S#&T

I’d like to quote Michael Avenatti: “BTW, they don’t have silver spoons or gold toilets in the joint. Buckle up, buttercup.”

Typical Leftist. Abuse the rules for their own benefit and then, when they are caught and get a slap on the wrist as a consequence, they cry like children for it is all so unfair.

Sentencing depends on how much one sobs before the judge? Now, that’s justice.

And Avenatti still has to deal with Stormy Daniel’s lawsuit alleging he stole $300,000 from her and the lawsuit from the handicapped client alleging Mikey embezzled most, if not all, of a legal settlement he negotiated for him. I don’t think either of those cases have come to trial yet.

He’ll be out in six months due to a “technicality”.

Avenatti will be a “suicide” a la Epstein…