“Unless Speaker Pelosi reverses course and seats all five Republican nominees, Republicans will not be party to their sham process and will instead pursue our own investigation of the facts.” 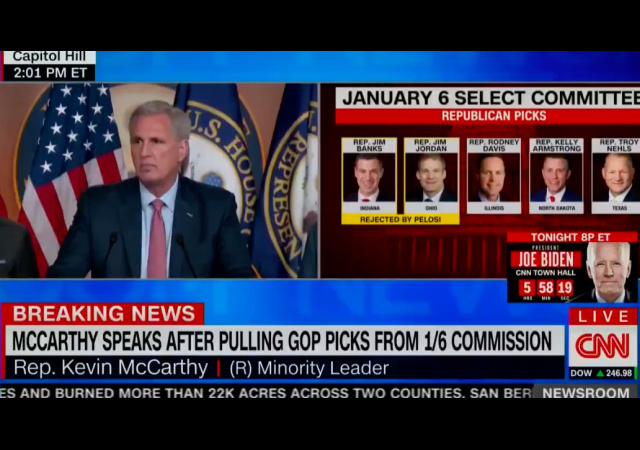 House Minority Leader Kevin McCarthy said the GOP will conduct their own investigation into the January 6th Capitol Hill riot unless Speaker of the House Nancy Pelosi changes her mind on two representatives she rejected from the committee.

The House resolution to create a select committee gave Pelosi the power to appoint people to the committee. She has to consult McCarthy, but she has the “final veto power over the members.”

A speaker using the veto power has never happened before:

“Speaker Pelosi has taken the unprecedented step of denying the minority party’s picks for the select committee on Jan. 6. This represents something that has not happened in the House before for a select committee, by the historian,” McCarthy, R-Calif., said at a press conference.

“It’s an egregious abuse of power. Pelosi has broken this institution. Denying the voice of members who have served in the military – Jim Banks, a Navy veteran who served in Afghanistan,” McCarthy continued. “As well as a leader of a standing committee. Jim Jordan isn’t ranking of just his first committee, he’s done it before.”

McCarthy’s fiery comments followed a statement in which he said Republicans will completely boycott the select committee if Pelosi, D-Calif., does not allow all five of his picks, including Jordan, R-Ohio, and Banks, R-Ind., to be seated.

“Unless Speaker Pelosi reverses course and seats all five Republican nominees, Republicans will not be party to their sham process and will instead pursue our own investigation of the facts,” McCarthy said.

Kevin McCarthy: “Speaker Pelosi has taken the unprecedented step of denying the minority party’s picks for the select committee on January 6th. This represents something that has not happened in the house before for a select committee…it’s an egregious abuse of power.” pic.twitter.com/B2AKGWtLUe

McCarthy added: “We will run our own investigation. We have law enforcement, we have military, we have doctors, we have people from all walks of life. They want to know the answer, the American people deserve that. They don’t deserve politics, they don’t deserve destroying the institution. No committee in Congress will work if one person can pick all who can serve. This has not happened before.”

Kevin McCarthy says "we will run our own investigation" after Pelosi drops two Republicans from her Jan 6 committee. pic.twitter.com/8h7hSOFCCc

And Liz Cheney has already said she’s staying on the committee to give them the coveted ‘bipartisan’ lie.

Remember. McCarthy worked his ass off to KEEP Cheney in her position just 6 months ago. He was totally happy with her toxic bullshit until she started to make him, personally, look stupid.

RINO McCarthy needs to be tossed. Any plan that includes him as ‘leader’ in the House in 2022 is doomed to failure.

This is not going to help her re-election campaign. Trump is going to grind her into dust. And so are her fellow Republicans.

She doesn’t care. She’ll get a cushy gig at MSDNC as their ‘conservative’ commenter and she’ll be breathlessly quoted by liberal hacks as the ‘true conservative’ (as long as she toes the party line, of course).

Why can’t she be kicked out of the party?

She can be voted out!

Of what? Other than the House caucus there is no Republican Party that she can be voted out of.

Each State has it’s laws which to one degree or another cover party affiliation. Each State party has it’s own rules. As an example in some States to vote in a primary run off the voter must have voted in the original primary election.

Cheney called Republicans out on their bullshit. That’s what irked her so colleagues.

I don’t see where the repub investigation gets subpoena power etc if Pelosi doesn’t bless it.

I wondered that myself. Pelosi could easily have frozen the GOP out – no subpoena power, no cross-examination of witnesses, no ability to call witnesses themselves. This looks like Pelosi was counting on the GOP to roll over (as usual), and she had a temper tantrum when they didn’t.

I wonder if the Congressional Communists will walk this back and agree to the proposed slate of Republicans.

They won’t have subpoena power but they can call witnesses who are willing to testify and offer affidavits of those whose identities need to be protected. Pelosi will argue all the witnesses before the GOP committee are liars.

But the very fact that Pelosi and her media allies will have to counter the opposing narrative will expose a lot of inconvenient information to Americans who have been fed nothing but Democrat propaganda.

She might have a higher standard to meet before she call call them liars if they are private citizens.

I assume it won’t have any powers, but it will be a public relations exercise, like the “hearings” that the Democrats held in the W Bush years. Those got major coverage, even though they were just private affairs. Of course this won’t, because reasons.

Interesting. This is actually more than I expected from McCarthy.

It also appears Pelosi shot herself in the foot. She could have agreed to the Republicans McCarthy selected and then denied them any subpoena power or shut them out all together. I am amazed that Republicans took at vantage of Pelosi’s screwup.

Pelosi has become dependent on GOP cowardice, and it has made her lazy and complacent. With crime running rampant, the US-Mexico border in chaos, and inflation set to hit 10-20% in coming months, I don’t think having Liz Cheney drone on about how some guys taking selfies in the Capitol represent “the worst threat since 9/11” will resonate with the proles.

I hope it works out.

the infamous ongoing investigation excuse to hide behind

Why even play this game, just start your own and expand it to voter fraud and FBI role in the Witch kidnapping. Throw in a little Adam and Sewell to spice things up and make daily announcements of findings. In fact, start tomorrow so they have to play defense. Then connect a little arkincide, Hunters Laptop and Heals Up and you will be ready for impeachment in 2022 and kicking Nancy to the curb.

I want a Congressional investigation into the 2020 riots, murders, looting, destruction of businesses and desecration of synagogues committed by the vile Dhimmi-crats’ goose-stepping, nihilist-thugs in “Anti-fa” and “Black Lives Matter.”

An invitation extended. A rug pulled from underfoot. An unarmed female veteran murdered for, what, trespassing?

Pelosi has a deep and progressive confilict of interest (i.e. denial of federal aid for crow management) and should recuse herself.

n.n: A rug pulled from underfoot. An unarmed female veteran murdered for, what, trespassing?

Actually, she was shot while participating in a mob that declared their intention to kill members of Congress. She was trying to lead the mob into the Speaker’s Lobby, giving the mob access to the House Chamber where House members were being evacuated.

I am glad Banks and Jordan threatened to break McCarthy’s legs and pull his fingernails out with a pair of pliers.

McCarthy would never do this on his own.
Pure scum.

I think it would be interesting to have a little compare-and-contrast of the treatment between the largely violent thugs who burned two buildings and sent quite a few uniformed US Secret Service officers into the hospital during 2020 and the 1/6/21 individuals who seem (so far) to be pleading out to Acts of Impolite Tourism with Occasional Use of the Warm Public Toilets inside the Capitol as Opposed to Freezing Their Tails Off In The Porta-Potties.

Somehow, I doubt as many government agents and paid informants were committing violence on the front lines during 2020… but then again, that’s what an investigation is for, right?

They are scared because they know if regular citizens had wanted them to die that day then they could have died.

Those citizens didn’t want to kill them, though, so now it’s time to lash out and create hyperbole/propaganda in order to seize more power and gain back that measure of control and dominance they all crave over private citizens.

That unusual behavior frightened the establishment elites. They fear that ordinary citizens might not be compliant sheep after all. Recall Sen L Graham and his overwrought case of the vapers?

These guys need to stop fucking about and just announce they are investigating the role Democrats played in creating the events that occurred on the 6th of January and how Democrats have purposely undermined the rule of law to help retain control and power in DC.

I think they (Rs) should skip the investigation and just announce something about anonymous sources that have said (fill in the blank)…. Fight fire with fire.. besides, it is pretty clear what happened. Reality is now officially subjective.

Does anyone expect the Democrats’ report to be anything other than what is called in the Navy a “gundeck” job?

Here is a better idea: hold hearings on the destructive effects of CRT. Or bring in families and small business owners hurt by the “15 days to slow the Wuflu spread” lockdown that lasted over a year. Or highlight surging inflation. Those are the things voters actually care about.

Only the Communist Party and the Franz von Papen Republicans care about the J6 Not Exactly An Insurrection.

I can’t believe what Pelosi is doing! She is evil & determined to go after Trump. Wasting our tax payer money on her hate. She needs to be pulled out of office. All she does is stir up hate. Give it up Nancy & let a young smart new person in who is not a hater like you. Why don’t you & your mob clean up the border again @ our expense only to try & pass your HR1 bill to get these illegals to vote for Democrats. Biden & you don’t care about us, it is all about keeping your corrupt gravy train going. GET OUT!!!