People said he “held strong biases against Jews, Christians and American culture” and “called Jews ‘evil’ and used other derogatory and degrading language.” 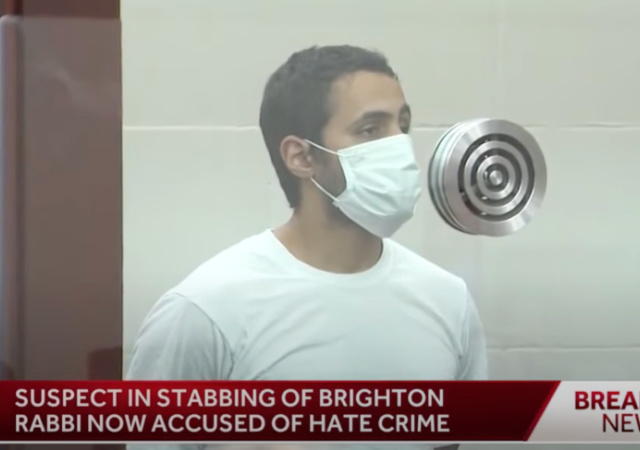 The office charged Awad with seven other charges on July 2.

The Jewish community wished Rollins charged Awad with the hate crimes right away. Rollins explained her office had to know for sure so they could make the charges stick in court:

During today’s arraignment [July 8], Assistant District Attorney Margaret Hegarty, supervising attorney for the District Attorney’s Brighton prosecution team, relayed new details about the July 1, 2021, attack and the alleged assailant. ADA Hegarty told the court that Mr. Awad had been present outside the Shaloh House Jewish day school on the day prior to the attack, acting in a suspicious manner that raised the concern of a witness. That witness ultimately took a photo of Mr. Awad to document his presence near the Jewish day school.

The following day, security camera footage captured Mr. Awad approaching the victim, Rabbi Shlomo Noginski on the Jewish day school’s steps as a children’s camp was underway at the location. Mr. Awad allegedly drew a weapon that appeared to be a gun, and demanded the keys to the school van. The rabbi, in fear, handed over the keys. Mr. Awad motioned for the rabbi to enter the van; at the same time, he put away the weapon and pulled out a knife, prosecutors said.

A meticulous and on-going investigation by state, local and federal law enforcement ensued over the long weekend. There is now additional evidence to further support the new charges brought against Mr. Awad earlier this morning. Specifically, witnesses reported that Mr. Awad held strong biases against Jews, Christians and American culture. He had repeatedly called Jews “evil” and used other derogatory and degrading language. The totality of the circumstances indicate that the Rabbi was likely targeted due to his religion. as he stood outside of the Jewish day school, in front of an enormous menorah, wearing a yarmulke, holding the keys to the school van.

Awad does not have a criminal history in Massachusetts. He faced battery and theft charges in Florida, where he attended the University of Southern Florida. He went to a mental health facility, too.

One college roommate, a Jew, said, “Awad attacked him in their shared kitchen one day, prompting him to move out and get a restraining order.”

The roommate said he was friends with Awad and knew he was Jewish since move-in day.

“He was very much anti-Semitic. He would say like all types of Jewish jokes. I thought he was joking at first and then I started to see seriousness in his comments,” another former roommate told WBZ.

After the assault in fall of 2020, the friends distanced themselves from Khaled, but still say they’re shocked he would go so far as to assault a stranger with a weapon.

“He disgusted me at that point. I wanted nothing to do with the guy. At this point, I was a little scared of him. I was scared of what he was capable of because I realize he was a very dark person,” one of the friends said.

How about lock him in the cellar with a bear?

What do you have against the bear?

Interesting reading regarding the act. This except:

“The prevailing national mood in the early 1950s was conservative and isolationist. It was a trying time for liberal advocates of immigration reform. One militant critic on the right mocked them as “the usual claque of innocent dupes who don’t know what they are doing — the gulliberals — who have always done the work of the Communist Party.”

No hate here. He’s a member of the “religion of peace.” Nothing to see. Time to move on.

Why can’t we just charge him with stabbing someone? This “hate crime” crap is a nasty slippery slope leading to the criminalization of thought as opposed to actions.

It will be determined to be a mostly peaceful stabbing.

Hates Christians, Jews, and America. And yet he did not emigrate.

“People said he “held strong biases against Jews, Christians and American culture” and “called Jews ‘evil’ and used other derogatory and degrading language.”

Did you hear he stabbed some dude, too?

While my sympathies are for the stabbed rabbi and his family, and I’d like to see the book thrown at this Muslim assailant, a part of me hopes that the Muslim identity of the criminal perp and his facing prosecution for a “hate crime” will get the activist class thinking about whether the “hate crime” category is legitimate, now that it is being applied to someone belonging to one of their client groups.

For the life of me, I do not know what a “love crime” or “simple respect crime” might look like. I’m a simple soul who thinks that an element of hate is present in any crime, regardless of who commits it against whom. Had this perp taken his ire out on another Muslim of his same ethnic group over some neighborhood beef, would the crime have been any less heinous and socially harmful?

Why is attempted murder not one of the charges? It would seem rather obvious that if a person stabs a person multiple times with a knife, the perpetrator’s intent is murder.