Suspect Arrested in Stabbing of Rabbi Outside Synagogue in Boston (Update)

Suspect Arrested in Stabbing of Rabbi Outside Synagogue in Boston (Update)

Police do not have a motive, but the rabbi’s family believe he was targeted because he is Jewish. 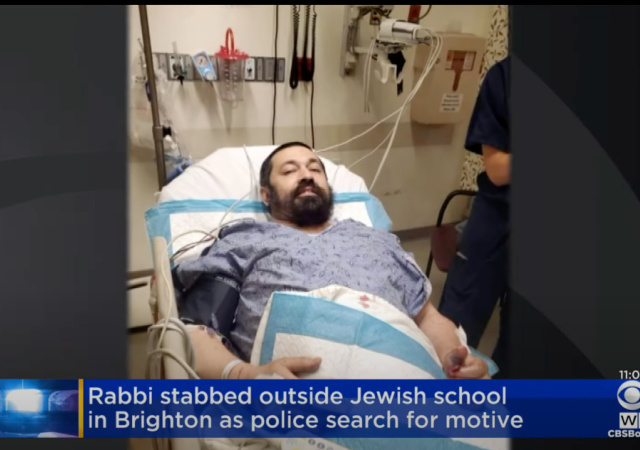 The Boston Police Department arrested Khaled Awad, 24, in connection with the stabbing of Rabbi Shlomo Noginski outside a Jewish school.

Police arrested 24-year-old Khaled Awad in connection to the stabbing. WBZ-TV I-Team sources said he was armed with a gun and a knife.

“The attacker came to him and pointed a gun at him, and said, ‘Open your car.’ [Rabbi Noginski] gave him the key and said, ‘Here’s the key’. And he said ‘No, you open the car.’” said Dan Rodkin, Executive Director of the Shaloh House.

The crime scene extended across Chestnut Hill Avenue, from where the two struggled by the van to the park where the rabbi ran to get away. Awad was quickly arrested by police.

Noginski is in his 50s and father to 12 children.

Noginski told Lubovitch.com: “I am grateful to the Boston Police Department for their rapid response, and relieved that the perpetrator is in custody. I am looking forward to returning to my work as soon as possible.”

Rodkin said they will add more security at Shaloh House for the rest of summer.

The police do not have a motive, but Noginski’s family believes Awad allegedly targeted him because he is Jewish:

Dov Hikind, a former New York state assemblyman and founder of the grassroots coalition Americans Against Antisemitism, told Fox News he spoke with Noginsky’s brother, who said the rabbi was expected to undergo surgery for eight stab wounds. The family believes the rabbi was targeted because he is Jewish, Hikind said.

He specifically singled out members of the “squad,” a group of four congresswomen known for their progressive stance on a variety of issues – Reps. Ilhan Omar, D-Minn.; Alexandria Ocasio Cortez, D-N.Y.; Ayanna Pressley, D-Mass.; and Rashida Tlaib, D-Mich.

President of the Conference of Jewish affairs Rabbi Aryeh Spero told Fox News: “There is a climate of more than just anti-Semitism. It’s physical attacks with the intent of killing people who are Jewish. Conspicuously Jewish. And that just doesn’t come out of thin air.”

No bail for Boston man accused of stabbing rabbi; ICE brought into case:

A 24-year-old native of Egypt is being held without bail after being accused of stabbing a city rabbi “seven or eight times” in a daylight attack some are demanding be treated as a hate crime.

That stabbing suspect, Khaled Awad of Brighton, is also being investigated by Immigration and Customs Enforcement and won’t be let out until at least a dangerousness hearing is held July 8, a judge ruled today at his arraignment in Brighton District Court.

I wonder if the FIB had the attacker on its radar.

They have observed him for years, and even had an informer provide him with knives, in an attempt to entrap him.

Just can’t figure out the motive..

Must be White Supremacy

To be fair, the Awads of the world, like Asian-Americans, suffer silently the moniker of “model minority” while also suffering—a double-whammy!—from being “white adjacent” and “white proximate”; so, yeah, I guess you’re right!

While I agree and regret (1) that “hate crimes” against Asians and Asian-Americans is on the rise in the United States and (2) that the reported number of incidents across 16 major U.S. cities has gone from 49 in 2019 to 122 in 2020. And I freely admit that much of the increase has to do with whites hurling insults and slurs to hurt, humiliate, and intimidate. I also acknowledge that, regardless of the Georgia shooter’s motives, the effect was to cause stress and fear among Asian American citizens.

I know these things because of their relentless media coverage, except of course for some of the less convenient facts. e.g., “that elephant” (“What elephant? I don’t see no elephant.”). Yes, the Asian and Asian-American U.S. population, ~17.6M souls, suffered 122 hate crimes in 2020, far eclipsing, news-wise I mean, the 1,029 hate crimes perpetrated against the U.S. Jewish population of 7.6M. This makes sense, of course, because the Asian and Asian-American population is so much bigger, and the media try to reach the greatest number of consumers… or something.

This probably explains the sensitivity surrounding the ~200 anti-Muslim hate crimes as well: Their population of ~3.5M is half that of the Jews among us, and we need to defend the minority.

“And I freely admit that much of the increase has to do with whites hurling insults and slurs to hurt, humiliate, and intimidate….”

Who are you really, Merrick Garland – or someone equally crazy?

My sarcasm meter indicated, didn’t yours?

If it was sarcasm, my apologies to ABush.

And if it WAS sarcasm, Merrick Garland is still crazy.

He and his ilk (EXPECIALLY that worm Obama) have incited all this violence.

There’s no need for scare quotes around “hate crimes”; though the GA shooting wasn’t one, most such crimes are just that, crime motivated by hatred of a larger group to which the victim belongs, and intended to target that entire group by proxy.

There has been an increase recently in hate crimes against East Asians; the part that’s being deliberately hidden from those who depend on the news industry for their information is who is committing those crimes. Almost none of them are being committed by white people, and as far as I know none at all by Trump supporters.

The same is true of those “hurling insults and slurs to hurt, humiliate, and intimidate” Asians; I don’t need the news industry to tell me about those, I’ve personally seen multiple such incidents, and in every case I’ve seen the person hurling the lawful but offensive speech was black.

I don’t know where you got the figure of “1,029 hate crimes perpetrated against the U.S. Jewish population of 7.6M”. The ADL (yes, I know) reported 751 incidents of antisemitic vandalism, and 31 assaults, plus 1,242 incidents of harassment, which it defines as “antisemitic language or actions”. Language, of course, is not a crime, and therefore not a hate crime, so it’s not clear how many of those 1,242 incidents were crimes.

Again, though, who is committing those crimes? Sure, some are by white people, and some even by the “right-wing” white nationalist type whom the ADL would like us to think of as the typical antisemite, but the vast majority are not. The vast majority are committed by 1) Arabs, or Moslems generally, 2) black people, 3) miscellaneous people who don’t fit that stereotype.

“…crime motivated by hatred of a larger group to which the victim belongs, and intended to target that entire group by proxy.”

You won’t find a better explanation than that.

This doesn’t come from an organized group. The motivation is absorbed gradually through the process of osmosis. The Obamas have have an osmosis machine they have been flooding gullible minds for many years.

True, but the Obamas are mouthpieces for the likes of George Soros. And Communist China.

Don’t give more credit to those two a-holes than is due.

We really need to keep a eye on those Amish people.

Yes. They can drive one buggy! /ducking

Careful. They are loaded for bear.

Assumed it was either 1) another dazzling urbanite or 2) another member of the “religion of peace”. A safe bet on most occasions.

Just how likely is it that the good Rabbi would be issued a permit?

Griz, as a MA resident, it’s almost unpredictable. LTC permits are issued at the sole discretion of town or city Police Chiefs across the Commonwealth. I have one, but I could be denied one if I lived in the town next door. What a system eh? The Constitution meets the Roulette Wheel.

PS – Boston is difficult, what a surprise.

“sources said he was armed with a gun and a knife.”

As opposed to the good Rabbi who, since he lived in Boston, was about as unlikely to be able to obtain a CCP as a CAIR grant. It’s not “unpredictable” in the case of Boston, Boston has always been, and still is, a constitutional rights-free zone.

Lilberal Jews threaten the rest of Jewry far more than any Muslim with a knife. Or gun. Or army.

Liberal Jews are an existential threat to Jews of the world because of their blind support of that maggot Obama, who in turn transfered BILLIONS to Iran to develop nukes.

Another attack by Biden supporters

A Brownshirt, by any other name.

Muslim attacks Jew, motive unclear. I suppose if finding a motive is politically forbidden then you will be unable to find one.

Obama, Iran, Susan Rice, Anita Dunn: they’re all laughing at how easy this has been.

We may never know why he did it. And it may never even get reported on the MFM since Awad is not an, er, “insurrections”.

Actually in this case my first guess when I saw the news wasn’t “Moslem”, it was “Russian organized crime”. The rabbi is a Russian immigrant, and the center he runs, and in front of which he was attacked, is devoted to outreach to Russian immigrants, and unfortunately that line of work inevitably brings one into contact with some unsavory types.

But Moslem makes perfect sense too.