Iran’s new top Sharia enforcer has been on U.S. blacklist for over ten years for “serious human rights abuse.” 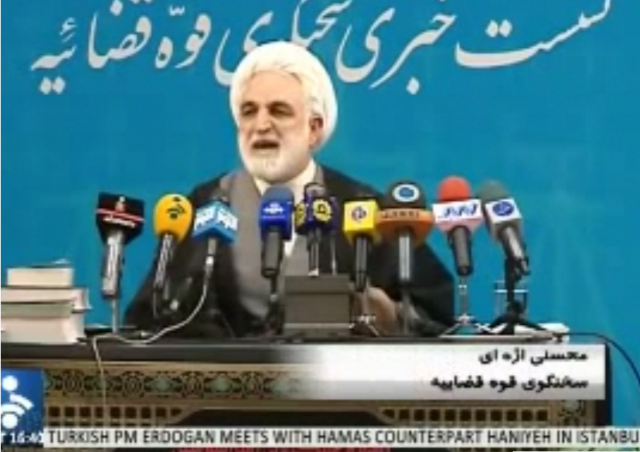 After naming mass murderer Ebrahim Raisi the winner of the last moth’s rigged presidential election, the Iranian regime has appointed another of its top human rights abusers, Gholam-Hossein Mohseni Ejei, as the country’s judiciary chief.

Ejei, who is set to serve as Iranian’s next top Sharia law enforcer, has been on the U.S. sanctions list for over 10 years for “serious human rights abuse.” Between 2005-2009, he served as the minister of intelligence under notorious Iranian President Mahmoud Ahmadinejad.

In 2010, the U.S. and the European Union blacklisted the then-Prosecutor-General, Ejei, for his role in the deadly crackdown of the pro-democracy uprising triggered by the flawed 2009 Iranian presidential election.

Human rights abuser Ejei will be replacing Iran’s President-elect Ebrahim Raisi as the country’s next judiciary chief. Raisi earned the title of “Butcher” for sending thousands of regime opponents to their deaths following the overthrow of the monarchy in 1979. Iranian dissidents accuse the new judiciary chief of being Raisi’s fellow henchman of in those mass killings.

He has played a direct role in the regime's mass executions and nationwide crackdown measures.

More reason why this regime should not be appeased by the U.S. and Europe.pic.twitter.com/fFpdwVWdwR

The judiciary chief’s appointment comes as a senior United Nations official called for a probe into Raisi’s role in the mass execution of dissidents in 1980s — which could implicate Ejei as well. The U.N. investigator on human rights in Iran, Javaid Rehman, raised concern that the Mullah regime was destroying mass graves and other evidence of the mass killings.

Iran’s supreme leader promoted a hardline cleric to serve as head of the judiciary on Thursday, amid international calls for investigations into allegations of abuses.

Ejei was put on U.S. and EU sanctions blacklists a decade ago for his role in a crackdown on a popular uprising when he served as intelligence minister during a disputed election. (…)

This week, a U.N. expert called for a new investigation into Raisi’s alleged role in the deaths of thousands of political prisoners when he served as a judge in the 1980s. (…)

The U.N. investigator on human rights in Iran, Javaid Rehman, told Reuters this week there should be an independent inquiry into allegations of state-ordered executions of thousands of political prisoners in 1988, and the role played by Raisi as Tehran deputy prosecutor at the time. read more

“As I have described in my reports, there is a widespread and systemic impunity in the country for gross violations of human rights, both historically in the past as well as in the present,” he said. “There are very few if any real avenues for accountability in line international standards within domestic channels.”

These top appointments comes as Iran’s 82-year-old Supreme Leader Ali Khamenei is paving the way for his succession. Some commentators regard 60-year-old President-elect Ebrahim “the Butcher” Raisi to be the Ayatollah’s likely successor.

While Ayatollah Khamenei is stacking the regime with his favorite mass murderers, the Biden administration is in talks with Tehran in hopes of restoring the John Kerry-negotiated 2015 nuclear deal.

The appointment of Raisi “the Butcher” and his fellow henchman hasn’t deterred the Biden administration from pushing for a nuclear deal with genocidal Mullahs. Iranian Foreign Minister Javad Zarif declared that a deal could be inked by August, before Raisi’s takes charge of the presidency.

If they Obama-era deal is any indicator, the Biden-Iran pact will likely release billions of dollars of frozen funds in Western banks and bring huge investments to the regime-controlled oil and gas sector, while doing nothing to dismantle Iran’s vast secret and underground nuclear weapons program.

But on the positive side we no longer have a person tweeting mean tweets on twitter. 🙄

The Democrats like them more than us. they give them plane loads of money while keeping Jan 6 protesters locked up.

They also gave them nukes. If North Korea and Pakistan have them, you can be sure Iran is way ahead.

Congratulations from the Biden Administration are on the way.

Iran? We have more dangerous Junta operatives HERE: Merrick Garland, Biden handler Anita Dunn – and so many more., including the fascistic Soros DAs all over the nation.

The war is finally on American soil.

Khomeni didn’t just incidentally return to Iran to rule.
Carter and the scumbag Vance overtly conducted a coup against the Shah
https://en.m.wikipedia.org/wiki/Jimmy_Carter%27s_engagement_with_Ruhollah_Khomeini