“The fact that Speaker Pelosi is willing to have vaccinated staffers arrested for not complying with her mask mandate while the border remains wide open tells you all you need to know.” 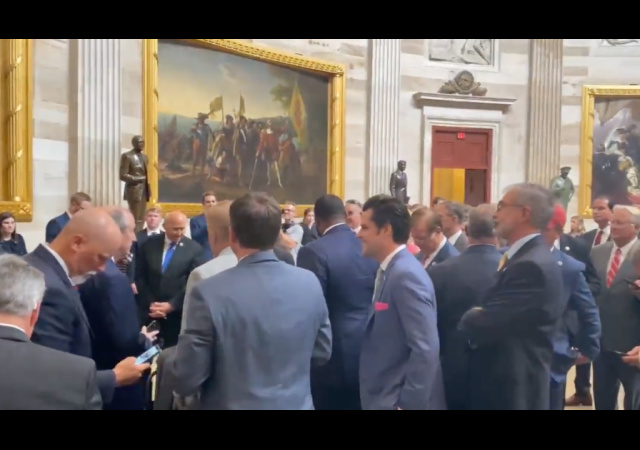 Speaker of the House Nancy Pelosi pushed a mask mandate in the House portion of buildings in D.C. The Capitol Police chose to enforce her mandate, threatening people with arrest if they do not comply with Dear Leader’s mandate.

The mandate does not apply to the Senate portion of buildings.

House Republicans and staffers crossed onto the Senate side to protest the mandate.

NOW: large maskless group of House GOP members has just crossed onto the Senate side and asked to enter the Senate Chamber. pic.twitter.com/gfmEAQMWbj

“Congressman Roy said it succinctly on the House floor Wednesday: ‘We have a crisis at our border and we’re playing footsie with mask mandates in the people’s house,’” a Roy spokesperson told Fox News in an email.

“The fact that Speaker Pelosi is willing to have vaccinated staffers arrested for not complying with her mask mandate while the border remains wide open tells you all you need to know,” they continued. “This isn’t about science. It’s about politics and control.”

Cawthorn told Fox News in a Thursday statement that the Republicans who left the House chamber to protest the mask mandate “took a firm stance on individual liberty.”

“Along with the majority of Americans, we rejected the totalitarian, hypocritical, and arbitrary ruling from Speaker Pelosi demanding masks be worn in the House,” Cawthorn said. “My staff should never fear arrest because they practice individual responsibility.”

House Republicans are protesting the mask mandate by walking to the Senate, where masks are not mandated by Capitol physician pic.twitter.com/sFD6AVnbr3

Masks are not required on the Senate side

The group was allowed on the Senate floor in small groups for this pic.twitter.com/H3QwxCbmMQ

A large number of House Republicans, MTG, Laura Boebert, Andy Harris, Chip Roy, and others have taken the Senate floor maskless, in protest of House rules as they are allowed in the Chamber’s rear floor galleries. pic.twitter.com/Oh8edjEjfc

Arrest all the republicans, is the right move to force.

Fauci says a fluffy little cotton mask will protect you against agents which escaped from a level 4 biological lab.

Wear it on your wrist or ankle.

I guess Trump really did break the “Democrats” good and hard. Their natural Authoritarian was just waiting there to be unmasked. No covering them up again, we see them.

Coleridge wrote (Coleridge wrote op-eds for a decade or so around 1800) that a conflict of interest is the pulley on which good character is hoist into public view.

The republican side of the house should commandeer Pelosi’s jet airliner and fly off to Texas, get some watermelon, shrimp, fresh grouper and meet with Governor Abbott.

Then, they could head down to the real border and start issuing return travel vouchers to send the Obamigrants back to whatever Obamistan country they came from.

The vouchers should feature an image of Obama in one of his golf costumes and O’Biden carrying his golf bags.

Note to GOP: Don’t make me laugh. You go to the Senate maskless, where masks aren’t “required” , but wear them in the House. Quite the courageous stand! You’re ceding the argument to Pelosi before the fight even starts!

How about getting the caucus together and deciding that ALL GOP will go maskless everywhere in the Capitol, House included. Let the USCP arrest all of you, every day.

Yes. They are running to a safe zone (remember those?) to make verbal protests (read noise) rather than standing on the front line. Cowards they are.

Let the USCP arrest all of you, every day.

They shall in all Cases, except Treason, Felony and Breach of the Peace, be privileged from Arrest during their Attendance at the Session of their respective Houses, and in going to and returning from the same; and for any Speech or Debate in either House, they shall not be questioned in any other Place.

So the Republicans need to make it perfectly clear to Pelosi and the US Capitol Police that it is an illegal and unconstitutional act to arrest a Representative or Senator for “unlawful entry” if they are performing their official duties and attending a session of the House of Reps. Period.

It is good that the discussion regarding masks is about power and control and not some health nonsense. Masks are to drive fear. Mask wearing is an indicator of submission to the totalitarians. They use it to gauge their power to control. Is this latest power play failing? If it fails, what is the next move by the deep-state? Force/violence? Escape to China? We are nearing an inflection point as their weakness is showing.