Fighting accusations he says insinuate or claim he committed a sexual offense. 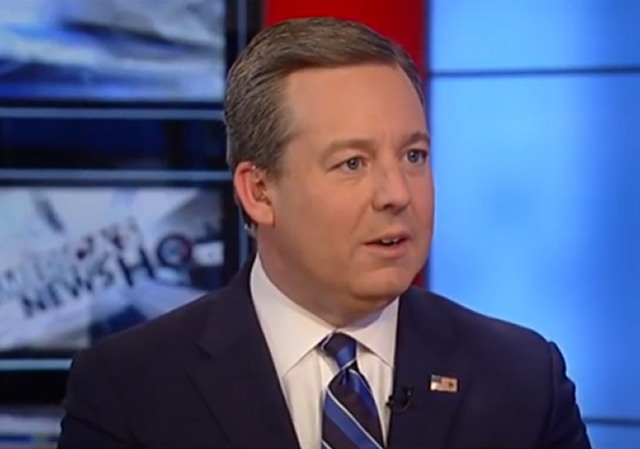 Journalist Ed Henry is suing FOX News and its CEO, claiming they made him look like a sex criminal after the network fired him in July 2020 for alleged sexual misconduct.

Henry’s departure from FOX shocked everyone, given his ‘good guy’ image and his high profile on the network. Henry co-hosted America’s Newsroom, but he made appearances on various shows.

Fired Fox News host Ed Henry filed a defamation lawsuit against the network and its CEO, Suzanne Scott, alleging that he was publicly painted as a “sex criminal” in an attempt to save Scott’s reputation.

The lawsuit was filed Wednesday in the U.S. District Court in New Jersey and comes almost a year after Henry was accused in a complaint of “violently” raping former Fox Business producer Jennifer Eckhart and sending “wildly inappropriate sexual images” to another woman…

In his suit, Henry accuses Scott and the network of turning against him and abruptly firing him while “publicly humiliating him in the process.” It says that when the network released its statement announcing the termination, Scott insinuated that Henry was guilty of sexual misconduct.

“Regrettably, Ms. Scott sandbagged Plaintiff with her statement, lending credence to the false allegations because she was trying to save her own career and burnish her image as a tough, no nonsense female executive who cleaned up Fox News,” the suit says.

“In reality, however, Ms. Scott had long been an instrument to cover up the existence of sexual misconduct at Fox News,” it continues, accusing Scott of trying to hide an alleged affair between a subordinate and the network’s president, Jay Wallace.

In separate lawsuits, Henry is suing hosts at CNN and NPR and individual users on social media for smearing him.

One of the new complaints alleged that Folkenflik, Camerota and Stelter have “longstanding grudges against Fox News and/or individuals associated with the company,” causing them to repeat false allegations on the reasons why Henry was dismissed from Fox News relating to alleged sexual misconduct.

The suit claims the defendants acted with malice toward Henry by “intentionally or recklessly making false statements about him.”

Read the complaint against CNN and NPR here.

I remember watching FOX News when Sandra Smith announced the departure of her former co-host. She seemed shaken by the news. You could hear it in her voice.

Like everyone, Ed Henry is entitled to due process.

A Fox News communications respresentative has provided the following statements to Legal Insurrection regarding the lawsuits:

STATEMENT ON THE ED HENRY LAWSUIT

“As we stated one year ago, FOX News Media conducted a thorough independent investigation into Ed Henry immediately after we were made aware of a serious misconduct claim against him by a former employee. Based on the results of those findings, we promptly terminated Mr. Henry’s employment for willful sexual misconduct and stand by the decision entirely. We are fully prepared to vigorously defend against these baseless allegations as Mr. Henry further embarrasses himself in a lawsuit rife with inaccuracies after driving his personal life into the ground with countless extramarital affairs in a desperate attempt for relevance and redemption.”

“Under the leadership of CEO Suzanne Scott, FOX News Media has worked tirelessly to transform the company culture, implementing annual, mandatory in-person harassment prevention training, creating an entirely new reporting structure, more than tripling the size of our HR footprint, conducting quarterly company meetings and mentoring events, as well as executing a zero tolerance policy regarding workplace misconduct for which we engage outside independent firms to handle investigations. No other company has enacted such a comprehensive and continuous overhaul, which notably, earned FOX News Media recognition as a “Great Place to Work” for the first time in its existence, a testament to the many cultural changes that Ms. Scott has instituted during her incredibly successful tenure as CEO.”

“FOX conducted a full and independent investigation of the claims against Jay Wallace — he was cleared of any wrongdoing and the allegations are false.”

I especially hope he wins the defamation lawsuits. The media and social media tongue-wagging over their flavor of the week needs to be reined in.

On the firing lawsuit, that depends on the procedures followed.

You must mean Jeffrey Toobsteak.

If I were a woman in that zoom
Call I would be suing!

I hope Henry wins whether he is guilty or not.

“It’s pretty obvious that Henry is right: Fox News is a leftwing organization which is simply gulling the rubes to keep Lachlan Murdoch in ascots and spats.

And I do know that Fox takes disciplinary action, disguised as “sudden unplanned vacation,” against conservatives at the network, while taking none at all against the leftwing propagandist Chris Wallace or the leftwing Fox contributor Mara Liaison, who praised antifa terrorists as the equivalents of the heroes of Normandy.

Ed Henry claims that an executive named Jay Wallace was promoted at Fox despite having an illicit sexual relationship with a subordinate, which the network “covered up.””

Fox has become such a mixed bag of worms, it’s depressing.