Senior FBI official: “We allege a group, backed by the Iranian government, conspired to kidnap a US-based journalist here on our soil and forcibly return her to Iran.” 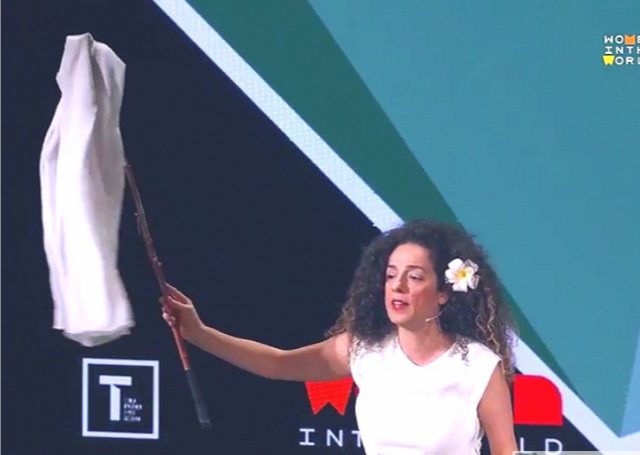 The FBI has charged four Iranian nationals for conspiring to kidnap a prominent journalist and women’s rights activist based in New York. The spy ring, directed by an Iranian intelligence officer, plotted to kidnap and smuggle Iranian-born U.S. citizen Masih Alinejad to Iran, The New York Times and other news outlets reported Tuesday.

The New York Post, on Tuesday, reported the details of the foiled Iranian plot:

Four Iranian intelligence operatives schemed to kidnap a Brooklyn-based journalist and smuggle her to Iran in a bid to silence her criticism of human-rights abuses in the Islamic republic, federal authorities said Tuesday.

In an interview with The Post, writer and activist Masih Alinejad acknowledged she was the target, and she did the same in a series of tweets. A source familiar with the matter also confirmed Alinejad was the target.

Manhattan US Attorney Audrey Strauss, who didn’t identify Alinejad by name, said she would have faced a fate that’s “uncertain at best” if the plan hadn’t been foiled by the FBI.

On Monday night, Alinejad told The Post that she was approached 8 months ago by about a dozen FBI agents who alerted her to the plot and later put her family up in three safe houses across New York.

“‘You are not safe here,’” Alinejad said the feds told her in their initial meeting.

“We allege a group, backed by the Iranian government, conspired to kidnap a US-based journalist here on our soil and forcibly return her to Iran. Not on our watch,” he said.

The ring, led by Iranian intelligence official Alireza Shavaroghi Farahani, allegedly began conspiring to kidnap Alinejad inside the US since as least as early as June 2020. (…)

The plan to kidnap Alinejad in the US allegedly included hiring private investigators to conduct multiple days of surveillance during which she and members of her household were photographed and recorded on video at and around her Brooklyn home.

Alinejad, a feminist widely regarded as the prominent voice for Iranian women in their fight against the regime’s repressive Islamic laws, founded the White Wednesdays campaign that challenges Iran’s Sharia-mandated hijab-veiling. In recent years, the movement has gained widespread support among Iran women. Courageous Iranian girls and women have posted pictures and videos of themselves discarding the Islamic headscarves, using the hashtag #WhiteWednesdays to express their support for the protest movement.

Angered by the success of the anti-hijab movement, the Iranian regime tried to silence Alinejad in the past. In 2019, Iran arrested three members of her family in retribution for her women’s rights activism.

The plot to kidnap a prominent Iranian activist and U.S. citizen comes to light as President Joe Biden’s administration is busy persuading the Iranian regime into restoring the Obama-era nuclear deal. While Iran sponsors international terrorism and wages war against U.S. allies, the Biden White House has eased sanctions on the regime. These include an international weapons embargo that will inevitably arm Iran-backed terrorist groups, such as Gaza-based Hamas and Lebanese Hezbollah.

I am grateful to FBI for foiling the Islamic Republic of Iran's Intelligence Ministry's plot to kidnap me. This plot was orchestrated under Rouhani.

This is the regime that kidnapped & executed Ruhollah Zam. They've also kidnapped and jailed Jamshid Sharmahd and many others pic.twitter.com/HUefdEbiil

Iranian women who defy hijab rules are threatened with rape, torture, and lengthy jail sentences. In August 2019, an Iranian Islamic court sentenced a 20-year-old woman for 24 years, including 15, for “spreading prostitution by taking off her hijab.”

“Masih Alinejad on Iran and boycotting the hijab”

How many of the kidnappers worked for the FIB?

At least they’re not entrapping Americans.

I was thinking the same thing. With the left coast, the Whitmer, Jan 6th all with Stasi “informants” involved.

A former militia member once remarked, “You could always tell which guy in the group was an FBI informer. He was the one who was always pressuring the others to go bomb a synagogue or shoot up a black church.”

If this is true, then there are some people in the FBI who are going to get something personal whacked for interfering with Iran.

This is the kind of case they should be working on, instead of trying to get US citizens to inform on each other.

That was my thought, too. At least someone at FBI is doing their actual jobs! Give credit where it’s due.

Such schemes and misdeeds on the part of rogue states are rewarded by this administration. Biden loves lifting sanctions on the Russia’s and Iran’s of the world, while imposing ever more stifling conditions on our own.

Maybe Joe will deduct 10% from the next few pallets of cash going to Tehran,
for the Big Guy.

Maybe, with his wife’s help, Joe is milking Iran for far more money with other deals?

Or did the hire the Iranians for the new spy on America program.

Semi-OT: Hopefully, LI gets an article up regarding the next entry into the FIB’s Hall of Shame.

Multiple FIB offices were alerted to Lawrence Nassar molesting Olympic and MSU gymnasts, but didn’t do anything about it until MSU campus police opened an investigation almost a year later. Then, the agents lied to the OIG about it and were not prosecuted.

I am VERY skeptical of this “heroic FBI foiled a kidnapping” story. The Biden* administration has been loosening restrictions on the terrorist Iranian regime. What better way to divert attention from the disguising spectacle of cozying up to apocalyptical genocidal maniacs dreaming of a new Holocaust with a phony-baloney story about a foiled kidnapping?

Anyone who believes a damn thing the FBI puts out needs to have their head examined. These clowns were the perpetrators of the “Russian collusion” bullshit, the January 6 “insurrection”, innumerable acts of malfeasance during Trump’s administration, as well as being the organization that is still paying a pension to Comey, Strzok, Page, and the rest of the little Nazi wannabes involved in that fiasco. Any group who’s ultimate boss is Merrick Garland is suspect in my mind. He is the latest in a long line of Dem wind-up Socialists dating back to at least Janet “Butch” Reno. The FBI should have been shut down after Ruby Ridge. The Waco shitstorm should never have happened. Ask Vicki Weaver what kind of crack investigations the FBI runs. Oh, forgot, she’s dead, shot in the doorway of her house by an FBI “sharpshooter”. No, this poor Iranian lady is being used by Wray and his crowd of clowns to distract from the fact that the Big Guy is busily setting up Iran with their own personal uranium enrichment program, courtesy of Barack Obama and paid for by the US taxpayer.

“I am grateful to FBI for foiling the Islamic Republic of Iran’s Intelligence Ministry’s plot to kidnap me.”

This is how you can tell she’s not a leftist.
A leftist would have torn the FBI a new sphincter for one or another intersectional offense, right after they just got done doing her a solid.

Considering the absolute disaster of the FBI’s handling of Larry Nassar, this looks like an attempt to scrub their reputation a bit.

Why go through all the trouble and risk of smuggling her to Iran?

It’s not like the Iranian regime has any love or respect for life.