Democrats Welcome Jeff Bezos Back to Earth With Tax Demands

Democrats Welcome Jeff Bezos Back to Earth With Tax Demands

The Eagle may have landed, but the vultures are already circling over spaceflight taxes. 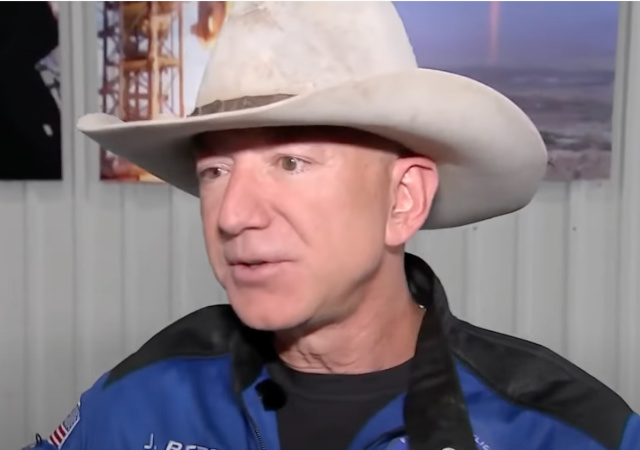 Big Tech billionaire and newly minted astronaut Jeff Bezos didn’t even have a full day to savor the success of the Blue Origin crewed mission before Democrats started virtue signaling and clamoring for taxes.

Lefty Democrats are lambasting Blue Origin founder Jeff Bezos over his “despicable” comments thanking Amazon employees and customers for financing his brief trip to space — and calling on the billionaire to pay his share of taxes here on Earth.

The show of appreciation by Bezos Tuesday to the workers and customers who “paid for all this” following his $5.5 billion flight did not dazzle the likes of Sen. Bernie Sanders (I-Vt.), Rep. Alexandria Ocasio-Cortez (D-NY) and Sen. Elizabeth Warren (D-Mass.).

“Am I supposed to be impressed that a billionaire went to space while he’s paid zero in federal income taxes some years and the workers at his company struggle to afford their medical bills, rent, and food for their kids?” Sanders tweeted. “Nope. It’s time to invest in working people here on Earth.”

Warren echoed that take, tweeting: “It’s time for Jeff Bezos to take care of business right here on Earth and pay his fair share in taxes.”

If only Bezos and his publication had supported President Donald Trump’s reelection bid. I am sure the founder of Space Force would have been far more supportive.

‘Jeff Bezos forgot to thank all the hardworking Americans who actually paid taxes to keep this country running while he and Amazon paid nothing,’ she tweeted.

In a follow-up tweet, Warren urged Americans to sign her three-step plan to change the nation’s tax laws.

In the past decade, both publicly traded and private aerospace firms have risen into prominence with aspirations of commercializing the final frontier. These companies are ushering in a new era of space exploration and travel — one that is catalyzed by free market competition. Companies like Virgin Galactic and Blue Origin, along with Elon Musk’s SpaceX, are looking to make space exploration more affordable and accessible, as well as advance the progress of the human race.

“We are really just on the cusp of seeing the activity of commercial human space flight,” Commercial Spaceflight Federation President Karina Drees told Yahoo Finance Live. “Future generations are going to look at this moment as a pivotal moment for humanity when it comes to the expansion into space.”

However, before anyone can fully develop the business model, politicians are looking for ways to tax it.

A senior Democrat has proposed a new tax on commercial spaceflights, shortly after Jeff Bezos touched down Tuesday from his brief, high-profile jaunt to the edges of space.

Rep. Earl Blumenauer (D-Ore.), who is spearheading the effort, said rich space dilettantes should have to pay taxes for those flights, and noted special concern about the environmental impact of sending people into space on trips with no “scientific value.”

“Space exploration isn’t a tax-free holiday for the wealthy. Just as normal Americans pay taxes when they buy airline tickets, billionaires who fly into space to produce nothing of scientific value should do the same, and then some,” Blumenauer said.

The Eagle may have landed, but the vultures are already circling over spaceflight taxes.

They hate billionaires and they hate space travel. They also hate economic activity and the United States of America.

I have no sympathy for Bezos whatsoever but really, how is it news that Democrats are grandstanding for money on the back of his success?

Yeah, me too. Eleven minute ride and he’s an astronaut. Put on a hat and now he’s a cowboy. Rootin Tootin Straight Shootin. Must be a rough rider.

Huh? The democrats love billionaires, they practically rule the party.

Bezos may be a cowboy, but he’s not an astronaut according to the FAA. FAA ruled that Blue Origin flight crew failed to qualify since his ship was entirely controlled from the ground. Bezos was nothing more than a rich little kid wearing a cowboy hat pretending to be an astronaut.

I wonder if Bezos lowers his taxes by donations to progressive causes.

And please remind me: Who ends up supplying the money to pay corporate taxes?

Very good point. Corporations don’t pay taxes. They might write the check to the IRS but funds they send are taken from employees in less generous salary, customers in higher prices, suppliers in less generous payments.

Ending corporate taxes would go a long way towards cleaning up DC as well. No taxes means no carve outs for particular industries or companies and no need to lobby a out tax policy.

As an added benefit it would also end the disparate treatment of health care costs between large employers and individuals on the open market.

You have causality problem there, we know from the Trump tax reforms that lowering corporate taxes goes back to share holders and the wealthy. It doesn’t stimulate growth, improve gov finances or indeed achieve anything. 2 Trillion $ was added to the national debt from Trumps tax reforms.

Now do Zuckerberg who converted his wealth into a “charitable” foundation a la the Clintons and got the press to fawn over him for it.

AOC/Warren/Sanders et all hate Zuckerberg. No one like him

Meh. This is all kabuki. Communists constantly promise to “soak the rich” but instead the rich get richer, and the gap between rich and poor grows wider.

Was there ever a larger economic difference than the one between Soviet leaders and peasants?

It’s been said elsewhere: If someone accomplishes something, you’ll find a Democrat figuring a way to tax it. Regardless what you may think of Bezos, the accomplishment was notable.

Yes, it was a very notable accomplishment but I think his ex-wife deserves 51% of the credit.

Technologically speaking, there is a huge difference between a suborbital spaceflight and a spaceflight that actually achieves orbit.

If Bezos’ goal is to provide millionaires with a short trip into space, then “mission accomplished”. But the system Bezos’ engineers developed won’t adapt easily to an orbital flight without massive redesign. So if he wants to keep up in the private enterprise space race he has a very long way to go.

“So if he wants to keep up in the private enterprise space race he has a very long way to go.”

All hat and no cattle?

It may be that Bezos is primarily interested in the space tourism market right now. If so, he is well positioned to cash in for at least the near future.

But at some point the potential customer base won’t be content with just short suborbital hops.

Oh, I’m sure he has a few, to keep his ag exemption.

I agree. If suborbital is all you have to offer, the Vomit Comet is a heck of a lot more cost-efficient.

At one time billionaires built skyscrapers in a urination contest now its space. My question however is what business is it of a knuckle-dragging liberal what these jokers do with their money? What is it about the capitalist system these loons don’t like? Private property rights? wealth accumulation? YOU know that’s not it. When flat screens come out only the rich could afford them. Now everyone has one in every room. Space could be the same way.

“What is it about the capitalist system these loons don’t like?”

You’re talking about Democrats. The answer is, all of it. I can’t even understand why you ask the question.

The new American Dream……Work hard, start a business, make lots of money so you can give it to the government.

Another day, another 50 cents after tax.

These “rich guy” flights actually benefit both the economy and the government (& taxpayer).

First off, rich guys are parting with significant coin, here in the USA, and it goes into the salaries of the engineers, technicians, and suppliers. A similar investment in say ART, or rare cars does not have the same effect.

Second, these rich guys are subsidizing the development of new, reusable space technology at a much lower cost than a bloated gov bureaucracy such as NASA could ever imagine.

Reminds me of a local proposal for a solar farm in my area. The developer very carefully figured out how to turn a profit, with a 30 year window. They proposed a $15K PILOT (Payment in lieu of taxes) yearly on a piece of fallow farmland currently taxed at $850.

ALL investment, ALL risk, ALL capital supplied by the developer, on a passive project that does not demand any service from the local government.

The local politicians and school board started squawking about how they should get SO MUCH MORE for such a VALUABLE installation, the developer killed the project and built elsewhere. Enjoy the $850 in taxes.

“How DARE you spend your own money on things we don’t like!”
— Every Leftist Dem Everywhere

“Nobody NEEDS a [insert object or activity here]!”

FYI: an interesting took at Bezos’ Blue Origin. The article is a bit gushing, but it does point out that Blue Origin is long on promise but short on delivery.

Personally I think Bezos might be prepared to abandon some of his more grandiose schemes for Blue Origin and instead cash in on the space tourism market.

Have you heard of Lobster Syndrome?
There’s never been a better example of it than what these Democrats are exhibiting today.

Ever hear of Stockholm Syndrome? Find me a better example of what democrats are exhibiting today and I’ll boil you a lobster..

The Democrats, as is usual for politicians, display their ignorance of the US tax system. If Amazon is paying no taxes, a proposition I don’t believe, then somebody else is: their suppliers, their employees, their insurers, and anybody else in the business deductions column. You simply can’t hide income like that, if it’s a deductible expense to you it’s almost certainly taxable income to somebody else (except for depreciation/depletion and net loss carryforwards). You’re only shifting where the tax burden lies, not eliminating it.

Not going to bother crying tears for bezos. He has enough money to defend himself extremely well against the jerks of the left.
IIRC I read an article that he could buy all the teams in the nfl, nba, mlb, and nhl and still have billions left over.

IF I was as rich as him, I’d buy a team in each league team, just to fire all the kneelers.

All Bezos would have to do is to casually mention something nice about Trump and they would tax the shit out of him.

“‘Who are the three most ridiculous politicians in the United States?’
Thanks, Alex, I’ll take ‘Oh No She Dint’ for tree fiddy.”

Is that your best shot Henry?

Your own adjective cheerfully solicited.

Wow, talk about your amazing coincidences. After 17 years… the very same day!

Federal aviation regulators have made a rare change to the requirements for its Commercial Astronaut Wings Program, meaning Blue Origin founder Jeff Bezos may not officially be recognized for his spaceflight this week.

The Federal Aviation Administration changed rules for the program on the same day Bezos, his brother and two others made their historic first commercial spaceflight on Tuesday.

For the first time in 17 years, the FAA updated its Commercial Astronaut Wings Program. Before the change, all that was required to be recognized was to fly to at least an altitude of 50 miles.

The change added a requirement that any commercial flight must also include activities during flight that are “essential to public safety” or contribute to “spaceflight safety.”