“The entire country went offline for more than 30 minutes on Sunday, according to researchers who study internet censorship.” 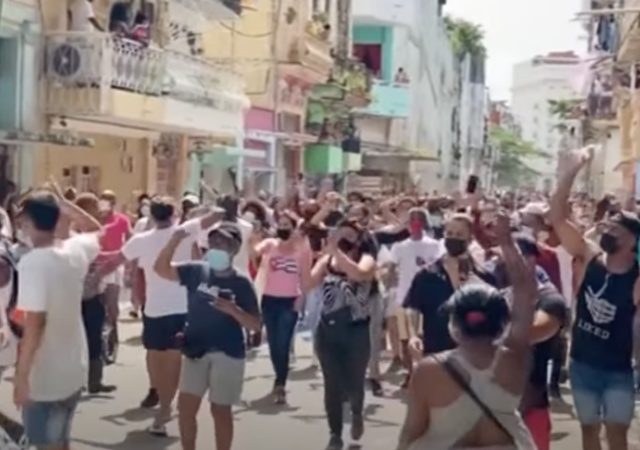 As Cubans rise and protest, their Communist overlords in government have blocked access to the internet and messaging applications.

The regime is simply attempting to knock out the ability of the protesters to communicate or share information.

It’s typically one of the first things an army will try to do to their enemy.

As Cubans protest, government cracks down on internet access and messaging apps

As protests grip Cuba, the country’s government has taken steps to block citizens’ use of the encrypted chat apps WhatsApp, Signal and Telegram, researchers say.

The entire country went offline for more than 30 minutes on Sunday, according to researchers who study internet censorship. Since then, virtual private networks, which are tools used to reroute internet traffic that can circumvent some internet censorship, and popular communication apps in Cuba have been blocked.

Cubans have taken to the streets since Sunday to protest against the government in the midst of an economic downturn and a major health crisis, as the country still struggles to deal with the coronavirus pandemic. Many protesters have organized online and shared videos of police detentions.

But since the protests began, the country has experienced widespread online censorship.

It must be awful to live in a country where people get censored over their political views. Thank goodness nothing like that happens here in America.

In other news, The Guardian is reporting that protesters are starting to disappear:

At least 140 Cubans reportedly detained or disappeared after historic protests

Scores of Cuban activists, protesters and journalists, including a reporter for one of Spain’s leading newspapers, have reportedly been detained as Communist party security forces seek to smother Sunday’s historic flare-up of dissent.

Erika Guevara-Rosas, Amnesty International’s Americas director, said at least 140 Cubans were believed to have been detained or had disappeared in the aftermath of Cuba’s largest demonstrations in decades.

“The idea is to punish those who dare to challenge the government … and send a message” that no further protests would be tolerated, said Guevara-Rosas, who said spontaneous and peaceful rallies had taken place in at least 48 separate locations, including Havana.

Never forget how the New York Times framed this story when it broke on Sunday night.

When the left tells you who they are, you should listen. pic.twitter.com/X6wz0zxxwU

There have also been demonstrations in support of the Cuban people at least in Spain, and in several US cities like New Jersey, Tampa and Miami.

Here in Miami Cuban Americans closed at least two major highways, and demonstrated in front of the United States Southern Command in Doral, all with the stated objective of getting the attention of the Biden administration, and the US armed forces.
They are asking for an armed intervention, but of course we all know that’s not going to happen.

No, it won’t. I’m not sure that Trump would have intervened militarily, either, but he’d be more likely to than Biden (who, like Obama with Iran, will just let these people die at the hands of their government). Trump, at least, would welcome Cuban asylum seekers, unlike the current admin.

Senator Bob Menendez said it last night, there will be no intervention. Of course, we do not need Menendez to tell us what we know.
I also agree Trump probably not invade ether, but he would have surely put pressure on the regime in other ways. I doubt Biden will.

In fact, while the Biden administration is allowing a free for all at the Southern border, they warned Cubans not to try to come here, that they will be returned to Cuba, or forced to settle in a third country if they can prove a credible fear of persecution.
I am not asking for a free for all for Cubans, just pointing out the double standard.

I think that if anyone can affirmatively argue for amnesty under U. S. guidelines, it’s the Cubans fleeing the horrific killings, torture, and beatings taking place across Cuba. Cubans are reporting that Argentina (or maybe Venezuela? I saw it yesterday and forget now which–not working, so can’t be bothered to take two secs to search, lol) has sent its military/police to quash the protests, and people are being taken while they are literally broadcasting (one journa while she was zooming an interview with a Spanish news station and one rapper who was talking into his computer, maybe on TikTok?). It’s horrifying what is happening there. I’d say take anyone who can get here or even meet them as they try to cross over to Florida. These are human beings fleeing communism for freedom. We want that. Or at least I do.

Meanwhile, the media here tries to frame the protests as discontent over COVID 19 and blackouts, ignoring all the evidence that these are people protesting against communism itself, and claiming for a move towards Democracy.

CNN is saying “one reported dead” and 120 detained, the official count from the regime, ignoring other sources and evidence of several deaths and thousands of people arrested or currently disappeared.

They also “forgot” to mention that the president of Cuba made a call to violence on national television, or that the regime deployed soldiers armed with garrote sticks, and dressed as civilians, to attack the protesters. This is all documented and easily available in social media.

Be shame if someone were to airdrop a ton of goTenna WiFi mesh nodes over the island. I’m just saying.

But, but, but – they get free healthcare!!

Some how the Cuban people have to ‘turn’ the army which will set up a battle with the special security forces. There will have to be a fight like this before the final fight. The free world can do the traditional: “send lawyers guns and money”. Enemy nations…China, Russia, Venezuela will support the government and its security apparatus. This will take a while once it starts.

It won’t. It’s pretty much already over, I think. The Cubans were disarmed decades ago, and they have nothing to fight with. A few state police reportedly stripped off their uniforms and joined the protesters, but according to reports, were summarily shot on sight by those still loyal to the communist state. It’s over unless they get help, and no help is coming from the free world, so . . . it’s over.

All those dreaming of the Second Civil War here should take note: it’s a bad idea. Not only will no one come to our aid, but China, Russia, Iran, NoKo, and the Latin American commies will all jump in against us (as is happening in Cuba as we speak). So scratch that off the to-do list.

Don’t be too quick to give up. The Vicegrad states were under Soviet domination for decades and they too had no guns. Guatemala fought Marxist insurgents for 3 decades, thanks to supply lines via Mexico. If the entire Cuban government fell to the freedom fighters by months end, there would probably be unmatched chaos with counter insurgencies for a long time to come. Gaining freedom from a civilized country for a civilized country is one thing. This current situation is going on within itself.

Plus, we seriously don’t have the “no guns” problem.

Frankly, Haitians have proven to be very poor citizens, with an extraordinarily high crime rate and welfare dependency. However it is clear that the Cubans won’t be let in because they will know the Democrats as Castro Wanna-bes.

and the FL contingent has proven to be conservative and thus not worthy of Biden’s god hand.

By the way, now would be a great time for a group of wealthy conservatives to use resources to smuggle out a bunch of Cubans and shuttle them to Biden’s open border or better yet just smuggle them right into the US.

Let’s expose the moral hypocrisy taking place on the left with their immigration shamers and how they not only won’t lift a finger for these people but also will likely try to forcibly remove them from the US.

“The Sons of Elian.”