“Guardians embodies those defining attributes while drawing upon the iconic Guardians of Traffic proudly standing just outside Progressive Field on the Hope Memorial Bridge.” 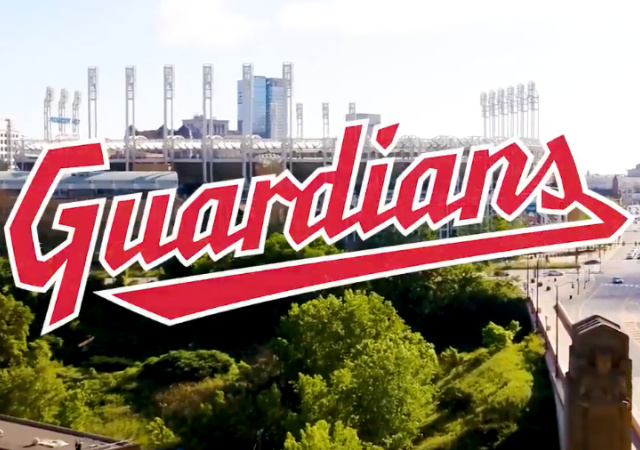 “There were a lot of challenges to find the right name and then make sure the name was available for use,” team owner and chairman Paul Dolan said. “It took a lot of time and a lot of extraordinary effort. Add to that, it was all done during a global pandemic. … I’m not sure that it’s finally over. But I am glad that we’ve entered the phase now where the name is out there and we can begin to promote what will be our future. That’s actually exciting.”

Together, we are all… pic.twitter.com/R5FnT4kv1I

The left targeted the Indians over its mascot and name in 2018. But owner Paul Dolan had an “awakening or epiphany” after George Floyd died in May 2020.

Now it’s all about progress.

The name Guardians actually has something to do with “progress“:

Progressive Field looms in the background when facing the 43-foot “Guardians of Traffic” that have stood tall for nearly 100 years on the Hope Memorial Bridge. These sculptures are meant to symbolize progress, a concept that’s now trickling over to the city’s baseball team.

“That’s one key component, the resiliency of people here in Cleveland and Northeast Ohio and the loyalty. The loyalty to Cleveland, the loyalty to one another as teammates, as co-workers, as family and friends. Those all become part of what Guardians really starts to evoke from an emotional standpoint.”

Dolan wrote: “In searching for a new brand, we sought a name that strongly reflects the pride, resiliency and loyalty of Clevelanders. Guardians embodies those defining attributes while drawing upon the iconic Guardians of Traffic proudly standing just outside Progressive Field on the Hope Memorial Bridge. It brings to life the pride of Clevelanders take in our city and the way we stand for each other while defending our Cleveland process.”

Yes, the Indians play at Progressive Stadium. It’s also where my Chicago Cubs beat the Indians in 2016 to win the World Series. The Indians blew a 3-1 lead.

The uniforms will remain blue and red. The organization will “make slight changes to mimic the structural architecture of the Hope Memorial Bridge, imitating the tresses of the bridge’s underside.”

The name will go into effect after the 2021 season. pic.twitter.com/ggCFyIRD2y

FWIW, the former indians can call themselves the “artichokes,” “brussel sprouts” or “cherry tomatoes.” I couldn’t care less. I haven’t, (and shall continue), to not give a flying frig at a rolling donut for any sports team. They threw actual conservative Americans under the bus years ago. Author John D. MacDonald used the phrase, “Scroom” to describe my attitude. (Say it fast three times.)

“Scroom” describe my attitude to a lot things these days.

They should have gone with “The Cleveland Rocks.”

Cleveland Floyd’s….
I can see the mascot right now!

Flatfoot Floogies? With the Floyd Floyd?

I was hoping for The Flaming Fartknockers. But, such is life…

It was certainly a comic moment when Tom Hanks got to the new name.

Sports watching since I was 6 or 7 has gone to next to nothing. Lots of free time on those Sunday afternoons.

P.S. Guardians of what? Leftism?

Progress, progress, progress.
I’m so old, I remember when Progress was GE’s Most Important Product.
They actually made things that made your life better. That was progress.
Not this incessant bitching and moaning bout who is entitled to what from whom, that only makes everybody’s life worse (except for politicians).

“They actually made things that made your life better.”

They actually made things. Now, they license their name to Chinese jubk-makers.

They will be the guardians of last place.

Where is Phil Sheridan when you need him?

Why not name the team The Cleveland Progressives? Sheesh!

“But owner Paul Dolan had an “awakening or epiphany’…” No, what he had was a series of MSM overdoses, turning his mind to mush.

How about the Cleveland Wokies?

Guardians of the Galaxy

Baseball struck out with me a long time ago.

The Indians will still suck, just under a different name.

They will need to remake the movie “Major League” with a transgender cast to make the wokeness complete.

The instant I saw the news, I ordered the DVD for that very movie. Centuries from now, they’ll find that in my grave, right next to my copies of Blazing Saddles, Slapshot, and Gettysburg.

I w ish Duvall had been in Gettysburg as Lee. Other than that a decent flick. Chamberlain at Little Round Top is the apogee of the movie.

The 40th anniversary of Blazing Saddles came with 10 post cards of scenes from the movie. I have “excuse me while I whip this out” on the fridge.

Off topic but at this point, I agree, we were lied to, just for different reasons

Remember the “outrage” when Space Force decided to call their members guardians??

Wel, at least members of the Space Force are armed, and don’t throw balls around.

I wonder who will claim the title “Star Lord”?

So sad that this happened. That said, Cleveland Rockers! What are the Guardians supposed to guard?

And they say Cleveland lacks charm. Should have gone with “The Cleveland Epiphanies”. Guardians sounds like something out of “Ancient Astronauts”.

Speaking of Cleveland charm, what other city ever staged a marathon where everyone got lost? Happened about 14-15 years ago in Cleveland. Maybe they should have adopted the name Cleveland Pathfinders.

I had some self-righteous type asked me how I’d feel if a team was called the Rabbis. My answer was, “It all depends. Do they win?”

What about the Cleveland Browns? Is that some sort of dig against color?

You had to say it, didn’t you?

The New York “Yankees” is prejorative.

“…The Oxford English Dictionary says that “perhaps the most plausible conjecture” is that it comes from the Dutch Janke, the diminutive of Jan (John). British soldiers are recorded using it as a term of derision in 1775. Mitford Mathews (A Dictionary of Americanism on Historical Principles [1951]) traced its rise, pointing out that no evidence of use of the word by New Englanders before the Battle of Lexington (1775) has been found.”

But, white people don’t snivel and whine and threaten. That’s why we have Vikings and Yankees.

With that idiot Lloyd Austin and his insane superiors in the Junta, the US Army football team is renamed “The Snowflakes”.

All you have ta ask is, “Are the Yankees white?” If so, prejorative is okay.

Does this mean the movie Major League is now racist contraband? Asking for a friend.

Do you think Lou Boudreau, Larry Doby, and Satchel Paige would be upset? Yeah, I saw them all at one time at Comiskey Park in 1948. Once in a life time and so far it has been a full life time.

“then make sure the name was available for use”.

I don’t understand the joke. Picking a corporate name for a national or multinational brand is a major legal and logistical task. You need to make sure some heavy metal band in Bumfrack, Nevada doesn’t already happen to have it registered as a trade name (like Chicago Transit Authority, except they were the copiers), or else you’ll never be able to ship your merch into that state. You’d like to ensure it wasn’t the name of a notorious group of regional night-riders 150 years ago. If the name isn’t an established English word (and sometimes, even if it is, like “Nova”), you want to make sure it doesn’t have a derogatory or self-ridiculing meaning in any foreign language. No, sounds like this guy had been through this particular mill.

Should have just gone with the Cleveland CrackHeads.

I think the guardians on the bridge are Caucasian.

And I’m pretty sure Bob Hope is white.

So many choices to help commemorate this historic choice for all of posterity!

All of those teams moved to Minneapolis.

Its only a matter of time before the woke police connect the dots.

From a friend on the FB: “First of all, I’m not a baseball fan and even if I were, I probably wouldn’t be a Cleveland fan, so I don’t have a dog in this hunt, as they say. However I am interested in mascots and logos and how they change over time. In the past couple of days, I’ve seen several stories about Cleveland changing it’s mascot, nickname and logo because it is offensive to many Native Americans. I absolutely get that and I’m not here to argue the point. I am, at the same, sympathetic to Cleveland fans who have never known anything but the Cleveland Indians (it goes back to 1915) and the (in)famous “Chief Wahoo.” What I find interesting is the new nickname and logo, which is the Guardians. Apparently, this is based on a number of gigantic Art Deco sculptures in Cleveland known as “the Guardians.” Having never been to Ohio, much less Cleveland, I can’t say how significant these are to folks in that area, but they were sculpted by Henry Herring (1874-1949), a New Yorker. Interestingly, he is credited with another sculpture (among others) known as “Defense.” It is a bas relief work located on a bridge in Chicago, and depicts a white soldier fighting off an attack by the Potawatomi Indians during an attack at Fort Dearborn in 1812. The monument describes how women and children were “brutally massacred” by the Indians and that they would be “cherished as martyrs.”

“The scene includes an angel, who seems to have chosen sides with the white settlers. I’m not very knowledgeable about that period, but I’ll bet the story is a bit more complicated than that, to say the least (anytime you see the word “massacre,” it’s time to be skeptical). So, I think it’s interesting that the Cleveland Indians will be changed to the Cleveland Guardians because of a series of statues by an artist who also created a work about a “massacre” by Indians.”

I think I would call them the Cleveland Clits, like for those things on baseball players shoes.
English is not my first language.