The letter “E” has an image of convicted cop-killer Assata Shakur. She is believed to be living in Cuba after she escaped prison. 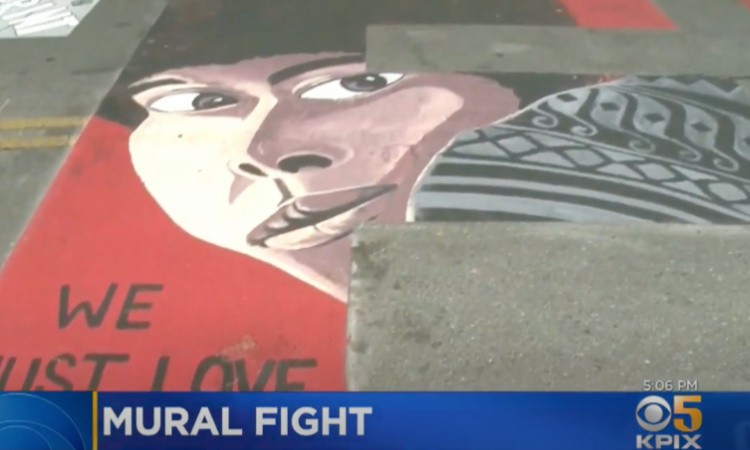 In the heat of national protests over the killing of George Floyd in Minneapolis, City Council authorized the painting of the mural at a June 15, 2020 meeting. In the next two weeks, a group of activists painted the 245-foot long mural in the street.

The mural featured several images in each letter of the phrase Black Lives Matter.

The suit points out the image of Joanne Chesimard, better known as Assata Shakur, who was convicted in 1977 for the murder of New Jersey State Trooper Wermer Foerster, a white police officer. Shakur was arrested and convicted of Foerster’s murder. She later escaped from prison and fled to Cuba, where she is believed to still be living.

The suit also points out that the mural included the logo of the New Black Panthers, which is identified by the Southern Poverty Law Center as a hate group that has encouraged violence against whites, Jews and police officers.

“Law enforcement officers, including the plaintiffs, were forced to physically pass and confront the mural and its offensive, discriminatory and harassing iconography every time they entered the Palo Alto Police Department,” said the lawsuit.

The police claim the mural violated the state Fair Employment and Housing Act, but Palo Alto “ratified the conduct and insisted that it remain and persist.”

The National Police Association demanded Palo Alto remove the mural, saying it is “reprehensible” for anyone “to celebrate a convicted police killer.”

My sympathies lie with the police, but I suspect that this will not survive a 1st Amendment challange.

Maybe it should be challanged to similar works, depicting people like Martin, Brown and others, shinning light on their nature.

I don’t think it is a first amendment issue. It’s a hostile work environment issue.

It would be a first amendment issue if a private group commissioned and erected the work on private land, like a billboard. This work is on public property (the surface of a public highway, no less), and sanctioned by the local government. Hostile work environment, in spades.

Not just sanctioned, commissioned and paid for by the city.

It is California. No police officer will be allowed to win a lawsuit against anything from the Left. It is time for those officers, and all the decent other Peace Officers, to leave California to its own devices. There is nothing left there for Americans.

Police should be leaving most cities. A number of years ago I came in contact with a rural small town police chief. Intially he was guarded. After some time he became much more open. I was a very smart man, he left a large city for his own, and more important his family’s well being.

I think that people need to reevaluate how they live. Less materialism and more family time. In a way that is what I did, I was clear of debt by age 35. I left a very well paying job as a VP in the energy sector, returning to being self employed. And while I spent 2-3 months a year for 1-2 week intervals in the beltway, the rest of the time I played a major role in my children’s upbringing.

people need to learn to live on one income, best if a couple both work, but far less hours, and devote time to self sufficiency, engaging their children in all aspects of it.

He was a very smart man, incredibly well rounded.

I don’t know. You paint a mural on the surface of the street for people to constantly drive over it with their car tires.

Doesn’t that tell you something?

That you can get a hate crime felony enhancement for doing a
burn out” on it.
https://abcnews.go.com/US/wireStory/man-charged-burnout-lgbtq-pride-crosswalk-78346252

It tells me where you should walk your dog.

While I don’t think the city government could have constitutionally blocked all displays, I do think they could have imposed some reasonable time, manner, and location restrictions instead of letting them vomit their vile support for a cop-killer on a 245-foot stretch of a city street in front of City Hall opposite the police department.

The police also need to reconcile the fact that the Palo Alto City Council that approved this offensive smear in the street is more than likely made up of politicians whose campaigns were supported by their union using money taken from their pay checks. Remember that come election time.