“This is a tiny little step of what Blue Origin is going to do.” 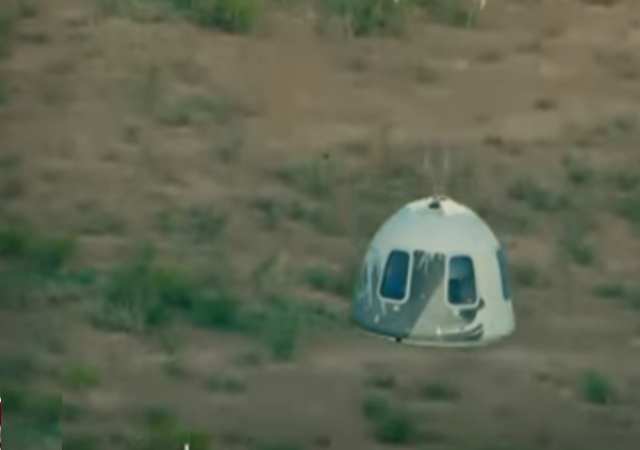 We followed the planned launch of the first crewed mission of Jeff Bezos’ Blue Origin for the past few weeks. The mission included Bezos’ brother, Mark, and 82-year old Wally Funk, a true pioneer in the field of aviation.

The mission succeeded, as the rocket launched as planned, and the crew landed safely.

Amazon founder Jeff Bezos set several records for human spaceflight Tuesday as he and three crewmates soared into space aboard a Blue Origin rocket from Texas, and landed safely in the desert about 10 minutes later.

As the capsule reached space, the crew was heard over a live broadcast cheering and whooping. “It’s dark up here!” said aviator Wally Funk, 82, now the oldest person to fly into space.

“You have a very happy crew up here, I want you to know,” Bezos said.

Today’s mission recorded several firsts: Bezos is the wealthiest man to go to space, Funk the oldest, and 18-yeat old Oliver Daemen officially became the youngest astronaut. Daemen was the only paying customer on this trip after his father, who heads a private equity firm, became the runner-up in an auction for the seat after the winner withdrew.

Reports indicate all had a good time on the short trip to suborbital space.

Bezos and the crew of Blue Origin took off from their base at Van Horn, Texas, at 9.12am EST on Tuesday, the 52nd anniversary of the moon landing, 12 minutes behind schedule. They ascended for four minutes before the New Shepard rocket booster separated from their capsule, leaving them floating in zero gravity for four minutes.

Bezos and Mark floated about, pretended to swim and tossed skittles in each other’s mouths while in the air, they said afterwards. They then returned to earth with parachutes controlling the pace of their descent, touching down in the Texas desert at 9.22am EST, 10 minutes and 20 seconds after liftoff.

They were greeted by a cheering crowd that included Bezos’ girlfriend Lauren Sanchez, his children, sister, Mark’s wife and Oliver’s millionaire parents. They traveled 66 miles above the surface of Earth – 13 miles higher than Virgin Galactic billionaire Branson. He tweeted his congratulations to the team afterwards.

…Champagne was flowing as the crew left the capsule, removed by the ground team from Blue Origin, who first had to ‘ground the capsule’ by sending a large static charge over it.

The four astronauts celebrated with ‘space cowboy’ Jeff Bezos who was still wearing his cowboy hat while hugging his fellow passengers on the sand of the Texas desert.

“If you want to be a space entrepreneur today, you have to do everything from the beginning. There’s no real infrastructure that’s at an affordable cost. So that’s what we have to do, is build that kind of infrastructure and then future generations will get to rest on top of it,” Bezos added.

And here is some fascinating background for Star Trek fans:

Christina Bezos sent a message of support to her brothers as they prepare for their trip to the edge of space, reminding them of time in the car pretending to be the crew of the Enterprise.

‘We are so excited for this monumental launch, Jeff this is something you’ve dreamed off your whole life,’ she said, adding that Mark is an inspiration.

She said Jeff would play the part of Captain Kirk during a long car ride as children, Mark taking on the role of, Sulu, and ‘I would be and Uhura, as we would battle Klingons while firing torpedoes.

‘Mark fire those torpedoes if ordered to do so,’ she said, adding they should ‘hurry up and get your asses back so I can give you hug, god speed New Shepard.’

Hopefully, the success of private missions will continue so that ultimately we can go where no one has gone before.

Nothing like wasting MILLION & MILLIONS on an EGO trip!

A lot of other people made money off that joy ride and it finally got Wally Funk in space so I’d say it’s a positive.

For space exploration to succeed, there must be profit.

It’s a shame Bezos survived. Upon his return, he gave 100 million dollars to American communists:

“Space cowboy” my ass. More like Spaced Out Libtard.

We need the private to pick up the mantle
You can say a lot about Bezos and the billionaires, absolutely HATE their politics, but they took risks and are reaping the rewards.
Hell, Bezo literally worked out of the adopted parent s garage to start Amazon…
Virgin Airlines started because his flight got canceled and he rented a jet and sold tickets…

It’s how America was built

I would revisit that Virgin Atlantic story and double-check your details about the origins of that British airline.

I did, I’m Sure there are other stories, that’s the one I know

What he’s trying gently to say is that Bezos != Branson.

And it’s how America is being destroyed:

I am glad to see Wally Funk finally get her chance to go into space.

At least Bezos paid for it, unlike the taxpayer funded golf swing on the moon.

And this was Virgin Atlantic’s first flight

Thirty five years ago, Richard Branson was stuck on a tarmac trying to leave Puerto Rico for the British Virgin Islands. His flight was grounded, and he’d been away from his girlfriend for three weeks. Needless to say, he was over it.

What do you do in this situation? My answer is typically to lean into my fate and order a glass of wine, resigning myself to an eternity stuck on an airplane.

Branson walked to the back of the plane and asked for a chalkboard and a writing implement. He figured out how much it would cost to charter a plane to BVI — and how much it would cost each passenger if the expense were pooled. And then he went for it, walking up and down the aisles of the grounded airplane selling tickets. On the chalkboard he wrote, “$39 one way to BVI

I know he already had a record company… “Virgin”

But this is how the West was built

I work not for Amazon, but for a 3rd party contractor that provides maintenance support to the delivery stations.
Bezos ought to be ashamed of the working conditions here….but the employees don’t mind as there is no drug testing. It’s not uncommon to smell marijuana in the parking lot at lunch break. Nice.

Ok, I take back everything I tried to give Bezo a glimmer of positive for

He just gave a communist a 100 Million dollars…

The launch was faked.

Well, it’s good to know that someone is helping to bolster the economy of Van Horn, Texas, since they lost their famous DIESEL FRIED CHICKEN outlet.
Seriously.

Van Horn has to be one of the most sad places in the country. It is one of the poster children of how the country is dying. Every time Ive driven through it, something else is closed and abandoned.

And speaking of comedy, I’m eating way too much popcorn.

The show of appreciation by Bezos Tuesday to Amazon employees and the customers who “paid for all this” following his record-setting space flight did not dazzle the likes of Sen. Bernie Sanders (I-Vt.), Rep. Alexandria Ocasio-Cortez (D-NY) and Sen. Elizabeth Warren (D-Mass.).

“Am I supposed to be impressed that a billionaire went to space while he’s paid zero in federal income taxes some years and the workers at his company struggle to afford their medical bills, rent, and food for their kids?” Sanders tweeted. “Nope. It’s time to invest in working people here on Earth…”

Sanders should be sent into space, maybe then he would appreciate it. Bezo could sell him air. Sanders would then appreciate capitalism.

“New Shepard” ??? Does that mean that Bezos considers himself the Second Coming? Well Bezos kind of rhymes with Jesus !!!