Funk trained to be an astronaut sixty years ago as part of NASA’s “Women in Space Program”. 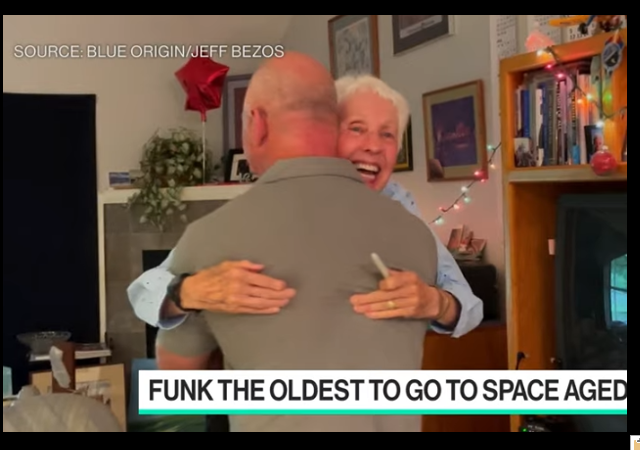 Last month, I reported that Amazon billionaire Jeff Bezos and his brother were joining the crewed Blue Origin flight into space on July 20th.

Now Bezos has completed crew selection on his new venture’s first “manned” flight, with the addition of Wally Funk, who was among the 13 women who passed NASA’s astronaut training program in the 1960s.

Funk, 82, will be the oldest person ever to travel into space, Blue Origin said in an announcement on Thursday.

“I didn’t think I’d ever get to go up,” Funk said in a video interview posted on the company’s website.

Funk, then a 21-year-old pilot, was the youngest of the 13 women who passed the same rigorous testing as the Mercury Seven male astronauts in NASA’s program that first sent Americans into space between 1961 and 1963, but were denied the chance to become astronauts themselves because of their gender.

The joy on Funk’s face when the announcement was made was radiant.

A fourth passenger, whose name has not yet been released by the company hasn’t revealed paid more than $29 million for the fourth seat.

According to a fact sheet from Blue Origin, Funk at one point was placed in a sensory deprivation tank for 10 hours, 35 minutes, setting a record and scoring higher than astronaut John Glenn in the test.

Blue Origin chose the July 20 date partly because it is the 52nd anniversary of the first moon landing.

Funk volunteered as a member of the “Mercury 13” program, otherwise known as the “Women in Space Program,” in February of 1961, which was a privately-funded effort intended to begin training women to fly in NASA’s earliest space programs. The 13 women in the program undertook all of the training and testing that the seven men selected by NASA for the Mercury spaceflight program undertook.

Funk became the youngest woman to graduate from the program, and she was told she “had done better and completed the work faster than any of the guys,” she said during a promotional video about her participation in the Blue Origin flight.

Funk even spent 10 hours and 35 minutes inside a sensory deprivation tank in one Mercury 13 test, outperforming famed astronaut John Glenn.

…Funk has extensive experience piloting aircraft, logging over 19,600 flying hours and teaching more than 3,000 people how to fly private and commercial aircraft.

“Everything the FAA has, I’ve got the license for. And I can outrun you,” she joked.

And while Funk, indeed, may be the most qualified member of the Blue Origin crew flying, I think there is an ulterior motive to Bezos’ choice. Over 75,000 people signed the petition to wanting Bezos to never return to Earth. I suspect many of those who signed would, however, like to see Funk land safely after having had her dream trip into Earth’s orbit.

It seems like they would want some test flights first.

I hope his publicity stunt doesn’t go wrong.
It would be highly embarassing if Bezos and the crew had to live the rest of their life in seclusion because the spacecraft did a 180 and plummeted to Earth in front of the world.
If you are risking that fortune, you have to be eliminating risk……and a fake performance is Bezos cup of tea.

I tell you, the fact Bezos himself is gonna be on the first flight really smacks of hubris.

If the spacecraft does a 180 and plummets, Bezos and the crew will be lucky to live the rest of their life anywhere at all.

She’s 82 years old. In spite of her past abilities, I see a potential for personal disaster. Space flight is, to put it mildly, stressful.
.

“Funk even spent 10 hours and 35 minutes inside a sensory deprivation tank in one Mercury 13 test, outperforming famed astronaut John Glenn.”

In 1961 Eisenhower was president of the US, Obama was born in Kenya and Barbie got a new boyfriend named Ken. In 2021 Eisenhower is long forgotten, Obama is now ex-president and Jeff gets a new girlfriend Funk.

I am feeling pretty funky

I am also happy for her, ride funky ride

Even a broken bezo clock is right twice a day!

“Even a broken bezo clock is right twice a day!”

A broken digital clock won’t be right even once in a century.

The first flight of Blue Origin is looking more and more like a one-way trip.

So they say, as a woman I want to see the test results.

I have heard different things.
No matter what, they weren’t going to send a woman in the 60’s, early 70’s…

NASA has had rather interesting selection parameters over the years. I’d put Jerry Cobb up against any of the Mercury 7 for capability but from day one it was run as a military op. Until the shuttle, there was no “stick and rudder” needed except to visit construction sites… Bassett being the example. The true challenge to early space flight was dealing with the “unknown” and that is more between the ears than muscle memory.

This has all the potential to be another “teacher in space” fiasco. BTW, per Breitbart, Bezos has retired from Amazon.