BLM stays, but Mayor Bowser removed the “Cuba Libre” mural in front of the Cuban Embassy. 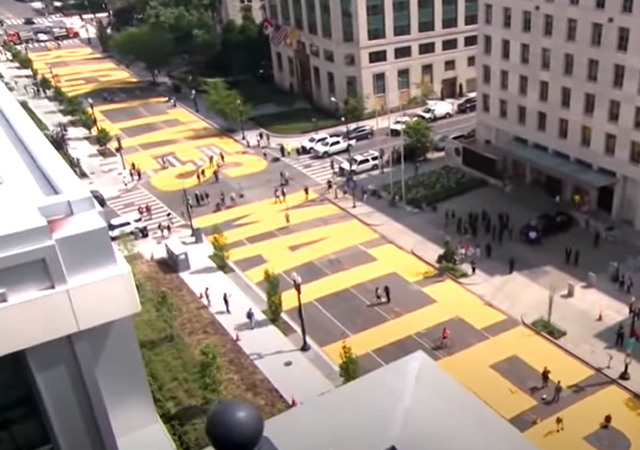 D.C. Mayor Muriel Bowser decided to make the massive “Black Lives Matter” street mural permanent. Violent crime is completely out of control, but this was a priority.

It’s safe to assume D.C. will never have a Republican mayor so the mural will likely stay forever.

Sixteenth Street NW between H and K Streets will be closed to through traffic while sidewalks will remain open to pedestrians and local access to businesses will be maintained, DDOT said.

Traffic controls will be in place to guide motorists and pedestrians safely around the work zone, DDOT said.

Construction to make #BlackLivesMatter Plaza a permanent installation will begin on Monday and is expected to conclude by October 1.

Last year, the street was officially renamed for BLM.

The section of 16th street in front of the White House is now officially “Black Lives Matter Plaza”. pic.twitter.com/bbJgAYE35b

Construction is underway to turn Black Lives Matter Plaza into a permanent installation in DC. Crews are out along 16th Street redoing the road, with plans to have 2 lanes of traffic, a pedestrian lane & new mural. Roadwork is slated to go through October #BLMPlaza #WashingtonDC pic.twitter.com/jL7Dg0OQYG

As this happened, Cuban-Americans in DC have been protesting in support of the people of Cuba, who are standing up to their Communist overlords. They painted ‘Cuba Libre’ in front of the Cuban embassy.

Washington, D.C., Mayor Muriel Bowser’s administration has removed a slogan painted in front of the Cuban embassy supporting the Cuban protesters who have taken to the streets to oppose the country’s communist regime.

The message showed up on Friday and contained the phrase “Cuba Libre,” which translates to “Free Cuba” and has often been used, especially on social media, to support the Cuban people who are currently clashing with Cuba’s government.

By the time the weekend had concluded, the mural was gone.

Meanwhile, Black Lives Matter Plaza in the heart of D.C. remains untouched. D.C. Mayor Bowser did not respond to requests for comment.

It's so obvious what's going on here…https://t.co/MD0NmD6Qez

What can we infer from this?

On the bright side, at least DC has one street that will remain in a good state of repair.

Wonder if they will charge you a $6.80 toll to traverse it?

Nothing says low IQ more than a street mural.

I think shit hole is most appropriate.

Any self respecting grizzly bear wouldn’t even go there to shit.

We DO have out standards and sense of dignity, you know!

Where are they going to erect the statue of Lenin?

CRT 101 mandates no statues of white people. ever.

They get Lenin. We get George Floyd. Garbage is being dumped on us.

Seattle already has one. Its huge, too.

Crime? What crime? It’s not crime unless they say so. By the way, only white people commit crime: CRT 101.

This is where the sheepish, middle-of-the-road sensibility of the populace leads us.

Please. A 30-second stroll through ANY DC neighborhood will bring it home to you why this decision was and has always been a foregone conclusion.
WOL didn’t its their station “Chocolate City Radio’ because it was in Hershey PA.

We all make fun of these knuckle draggers but how is it the residents of this cesspool put up with it?

Because it’s them.
At closing time in DC, nearly all white workers leave for their homes in Maryland or Virginia.
The ones that are left almost all have Lives that Matter.
This is why DC continually gets police chiefs like Cathy Lanier and elects mayors like Marion “The Bitch Set Me Up” Barry and Muriel “Kids Will Be Carjackers” Bowser.

90+% votes for Obama, for Hillary, for Biden. Even California only hit the lower 60% for these four elections. This is who they are. This is who is staffing the offices in DC. Any questions?

Deepen the divide…..celebrate actual violent groups while portraying honest, hard working white men as dangerous.
We are only dangerous if you keep poking the hornet’s nest.

From the U.S. Constitution: “The Congress shall have Power To… exercise exclusive Legislation in all Cases whatsoever, over such Dis­trict (not exceeding ten Miles square) as may, by Cession of particular States, and the Acceptance of Con­gress, become the Seat of the Gov­ernment of the United States.” (The U.S. Constitution, Article I, Section 8, Clause 17)

From an article on the Heritage Foundation website, “In The Federalist No. 43, James Madison explained the need for a ‘federal district,’ sub­ject to Congress’s exclusive jurisdiction and sep­arate from the territory, and authority, of any single state.”

It appears to me that mayor Bowser in this and in other instances is acting as if D.C. is like a state instead of a federal district which should be controlled by congress. The citizens of the U.S. through their representatives should have a say about making BLM Plaza a “permanent installation” and/or what message is painted on any street in the District. The District doesn’t just belong to the people who live in it, it belongs to all Americans.

When DC was given Home Rule in the 70s (aka. a mayor and city council) Congress did include that they have veto power, so to speak, over any legislation enacted. There are legislative procedures for how Congress can do so, and time limits.

Here’s the issue: All of this, the original painting of the mural and what’s happening now, was and is being done through executive action by the mayor. That’s how Bowser can get around Congress, but even if the DC Council passed legislation it wouldn’t make a difference since last year the Dems held the House and this year they control both.

I can’t imagine it changing enough that Congress would touch that now-sacred cow. Nor the brown “Black History” museum built not around the Mall, but on the Mall itself.

DC is turning into a garbage pit. So it goes.

It was disgusting then, I can only imagine now

Lefty answer to people who want to free Cuba. “Why didn’t you run from Batista?” “What is communism really anyway, and what’s so bad about fairness?” — seen on actual woke chat. They want to actually normalize it.

Recall that one of Castro’s things was racial equity. The white people in Cuba must be equal to the brown people. To a large extent I would guess the Castro revolution was a lefty brown revolution, and the whites were lucky if they could escape to Miami.

Now “they are all equal,” except that curiously the ruling class is exclusively Hispanic heritage, not a brown face among them.

Good for them. Now do all of DC and defund the police for good measure. I’ll avoid DC in the future.

I used to live in adjacent Virginia in the 70s and 80s. Going into the city was tolerable; we used to visit the Smithsonian buildings and occasionally 14th Street Liquors (VA’s had entirely useless state-run liquor stores back then).

We revisited the area on an RV trip in 1998, and the place looked like dystopian fiction. Concrete bollards in front of every public building, you could no longer drive Pennsylvania Ave to view or photograph the White House, public monuments closed to the public, blockades and checkpoints everywhere. And this was BEFORE 9/11. I swore I’d never return, and I haven’t.

Only a matter of time before they tear down the Memorial Wall for Viet Nam Veterans and put up some liberal garbage in praise of Black LIves or some criminals killed by police.

It can be the designated place where people congregate for drive-by shootings and mayhem.

Like every Martin Luther King Boulevard in every D run city in the country.

MLK was a genuine civil rights leader. BLM is a Marxist-led hate group as I see it.

Where else in the world have we seen this? In countries where the Marxists have seized total power, of course.

The difference between those places and the US is — for the moment — that in those other places the people who created the murals condemning Marxists are themselves erased. Along with their murals.

The revolution brought to you by the establishment.

So the government is going to promote Marxism
Let the fun times begin I guess with BLM owning the streets.

“These individuals were contacted for comment on the permanent changes to BLM Plaza, but were not immediately available.”

Yeah permanent…. In an ideal world the r Congress would revoke home rule in preparation to cede all of it to Maryland minus the WH, Capital grounds and a few monuments and memorials.

Several dozen cans of spray paint should take care of this apostasy.

Change the name from Washington, District of Columbia, to Washington, Death City. Nothing will have changed. It’ll be Washington, DC. The civilized and the unfortunates who don’t have business there will still be inclined to stay out.

One of the items on my bucket list was a visit to DC, but not any longer.
.

BLM is arguably an anti-Semitic hate group noting that it is on record (via Patrisse Cullors) of denying Israel’s right to exist and also allowing its name to be used with chants like “Israel, we know you, you murder children too.” I think all the BLM murals should go the same way as those Confederate statues. They are in fact far worse.

There is no such thing as “permanent”.

And, “Something there is that doesn’t love a wall, …” (HT Robert Frost)