I guess this is a reward for endorsing Biden in 2020 over Trump. I doubt Flake’s endorsement helped Biden much, though. 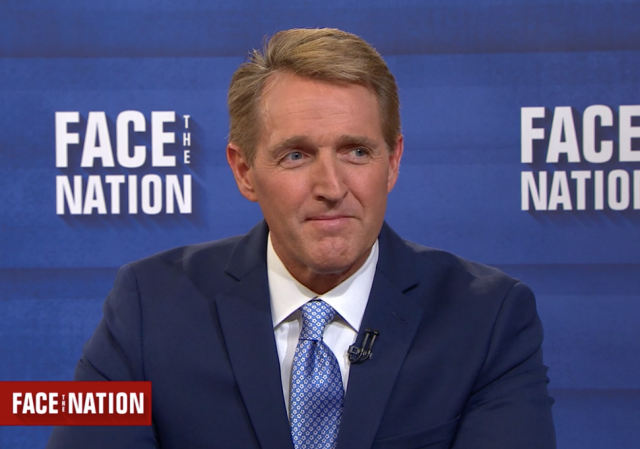 Flake represented Arizona in the House from 2001 to 2013 and the Senate from 2013 to 2019. However, he became well known as a harsh critic of former President Donald Trump.

I guess the nomination is a reward for endorsing Biden in 2020.

Flake stated: “With this nomination, the Biden Administration reaffirms the best tradition of American foreign policy and diplomacy: the credo that partisan politics should stop at the water’s edge. U.S. foreign policy can and should be bipartisan. That is my belief as well, and my commitment.”

Is it a reward? I mean, who would want to be an ambassador to Turkey? Unfortunately, Turkey is a member of NATO, thus our ally. Ally to what who knows considering President Recep Tayyip Erdoğan purchases Russian military equipment. He also helps Russia by blocking NATO defenses in Poland and the Baltics.

Let’s not forget Erdoğan’s hatred of the Kurds. How about Turkey’s nonchalant attitude about stopping people from crossing Turkey to join ISIS?

Erdoğan blew up at Biden because he had the audacity to recognize the Armenian genocide. The president has shown signs of wanting to bring back the Ottoman Empire. Don’t even get me started on the Hagia Sophia.

It sounds like Flake is up to the challenge:

“This is a pivotal post at an important time for both of our countries,” his statement said. “Cheryl and I are grateful for the opportunity to serve, and eager to get to know the extraordinary people of Turkey.

“If confirmed by the Senate, I will be pleased to join a strong, experienced and capable team representing U.S. interests abroad. Having served in both the U.S. House and Senate, I understand and appreciate the role Congress plays in U.S. foreign policy, and I look forward to that partnership. I also understand the value of having America speak with one voice. Having lived overseas, I have a deep appreciation for the indispensable role that the United States plays around the world. There is no substitute for U.S. leadership.”

Flake constantly criticized Trump, calling him an “embarrassment to the office.” He said Trump’s behavior “is not conservative.”

Well, Flake was always a Turkey, wasn’t he?

A turkey for Turkey!

Is there ANYONE a rino can’t be bought off by?

I guess the ambassadorship to Chad was already filled.

How about the ambassadorship to Karen? Is that still available? *fills out application*

Let’s be fair here. Ambassadorial appointments have always been prizes.

Gets him out of Arizona.
Apologies to the people of the US if that turns out as badly as getting Sanders out of Vermont.

Can I be ambassador to Nauru? lol

Is that a Turkey leg or the whole Turkey?

Asking for a friend…

congress.gov only goes back to 1981, but every Senate-confirmed ambassador to Turkey between then and now has been a career diplomat.

that should make some interesting tv at the confirmation hearing

And well he should. His chances of getting assassinated are better in Turkey than almost anyplace else in the world.

Not many R’s will be opposed to getting this RINO out of the country for awhile.

Sometimes the jokes write themselves.

Off-topic – or maybe not. South Africa is publicly melting down as the country continues to fracture along racial/ethnic lines.

It is important to realize that this violence has been going on more or less continuously in South Africa since 1994, albeit with a lower body count than what we see now. This is the future Lloyd Austin, the woke Pentagon, and the rest of the Biden* regime is pushing us towards.

Thanks, Ambassador Flake! While you enjoy yet another luxurious government-funded sinecure perhaps you could spare a thought or two for the victims of the regime you helped to install in power.

South Africa had the highest per capita income, best government services in Africa.

Then the Apartheid regime gave up power. Soon it’ll be Zimbabwe 2.0, with whites being massacred, maybe wiped out completely.

Hey just what Africa needs, another failed state with a dictator in charge. What’s not to like?

Of course no Western country will let in the refugees who are white. They are white, remember. Just let them be massacred and abused, then wring your hands over it in a magazine article or cable news special. Long after you could of helped.

Make him Ambassador to the Vatican. It would get him out of the Senate so we can replace with a Republican, and we’d get to be amused watching this Communist Pope deal with having a Mormon as Ambassador from the US.

Has anybody ever read the book “The Ugly American?”

It called out EXACTLY this idiocy (although the focus was on Russia at the time).

US ‘ambassadors’ were arrogant, loud, incompetent and stupid jackasses that had zero qualifications or knowledge about the countries they were sent to, and were more concerned with partying and making big, expensive, grand gestures that looked good in US papers and did fuck all to actually accomplish anything or improve quality of life in the countries they were supposed to be helping. Meanwhile Russia was sending actual professionals that were cunning, manipulated, and totally dedicated to actually pushing Russian interests. When the US ambassador explicitly called out this behavior to the US government and asked for changes, they immediately replaced him with one of the previously mentioned loud, arrogant idiots.

US ‘ambassadors’ are a JOKE on the world stage. World leaders don’t talk or negotiate with them. They publicly make photo ops with them and privately tell them to fuck off and call somebody with actual authority to negotiate and make decisions.

This Flake is not so much a Turkey as he is a buzzard.

And that, folks, is everything you ever needed to know about Flake. Nobody decent wants to work for the pedophile, but Flake will.

Let’s work a deal where they keep him.

So being a jerk has rewards? Who knew. I hope he enjoys his “job.”

It’s hard to Soar with Eagles, when you work with Turkeys.

Jug ears did the same things with Chuck Hagel. Both RINOs, both attempts to show these slime ball commies could work with both sides when in fact they were always in lockstep.