Mohammed Othman accused of three anti-Semitic attacks in Manhattan on May 20. 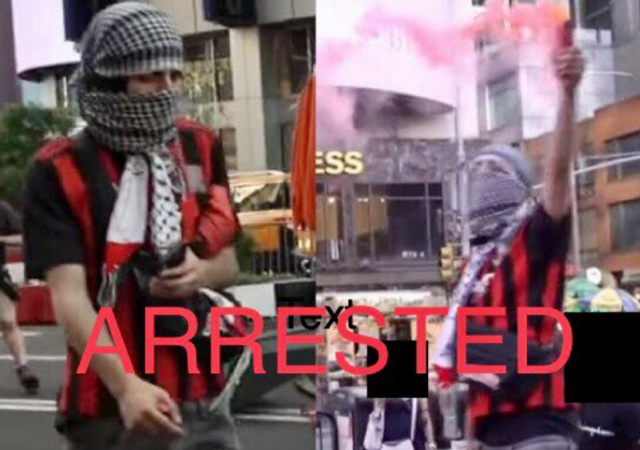 The New York police arrested Mohammad Othman, 24, for allegedly throwing fireworks and burning a Jewish woman in Manhattan on May 20th.

The attack took place during a pro-Israel rally.

The police also charged Othman with two other anti-Semitic attacks during the same rally:

JUST IN – Explosive device was thrown at a crowd in NYC’s Diamond District amid Pro-Palestine and Pro-Israel protests.pic.twitter.com/PT5peG3Q58

Othman has prior arrests due to marijuana. He faced charges of “violence with strangulation in 2020.”

The police got closer Othman in 2021:

He was arrested on two separate complaints on Feb. 22, 2021, according to police.

He was arrested for criminal mischief after he got into an argument with his brother and broke a window with a mug, police said.

He was also arrested after he had a fight with a private sanitation truck driver and charged with driving without a license and possession of psychedelic mushrooms, cops said. He was also driving with an open container of alcohol, police said.

These recent attacks against American Jews were committed by vile, goose-stepping, hate-filled Muslim supremacists/terrorists of the vile Dhimmi-crat Party. Feckless, morally bankrupt, stupid and utterly useless Chairman Xi-den and his lackey, AG Garland, can’t be bothered to summon even a scintilla of opprobrium or outrage, busy as they are chasing phantom “white supremacists.” That’s how utterly dominated by Muslim supremacists/terrorists are the ethos and platform of the contemporary Dhimmi-crat Party.

The perpetrators appear to be taking advantage of NY repeal of it’s anti mask laws; Klan laws. Perhaps that law should be reevaluated.

An engineer. Ha! I knew it!

What makes you think it’s the same person? Both Mohammed and Othman are very common names.

Not in Staten Island.

Engineer? A “Frontend Developer” is basically a secretary.

Immigrant’s and their children should be required to have zero crime, with a penality of deporting families with bad apples. far too much riffraff are here.

US citizens can’t be deported. And naturalization, once it is legitimately obtained, can’t be revoked. Also, punishing the family for one member’s crime violates due process.

Parental responsibility is the answer to juvenile antisocial behaviour.

Milhouse you are wrong! There are situations where a citizenship can be revoked!

Grounds for Denaturalization
Falsification or Concealment of Relevant Facts. You must be absolutely truthful when filling out paperwork and answering interview questions related to the naturalization application process. … (This one should lead to the Minnesota Menace to be stripped and deported)
Refusal to Testify Before Congress. …
Membership in Subversive Groups. …
Dishonorable Military Discharge.

Now if he’s a natural born citizen then it might not be possible, but removing him from the streets is a step in the right direction!

Wrong. There are several ways citizenship can be revoked.

Being Muslim and anti-Semitic I assume the Democrat city government and DA will release them with profound apologies.

You assume incorrectly. There is no chance of that happening.

LOL. You obviously don’t live in New York or have much knowledge of the Manhattan District Attorney’s office.

Police can arrest him all they want. NYC’s commie prosecutors will make sure he never even gets his wrist slapped.