Apparently, Dreier imagines that FEMA is some kind of first responder force that responds to local events like the fire department or law enforcement. 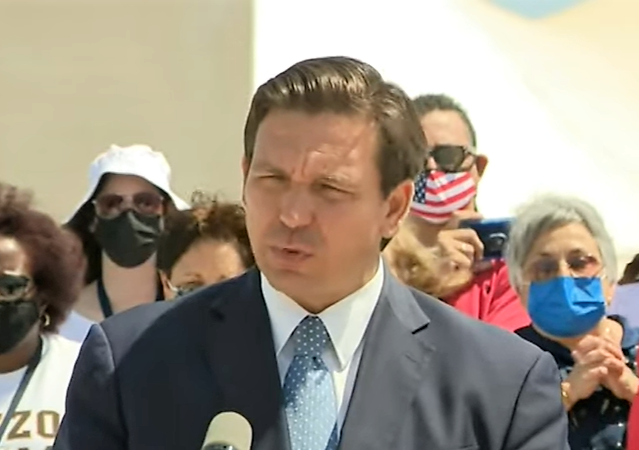 DeSantis is full of fight against the leftist agenda, its activist media arm, and its Big Tech and antifa/BLM enforcers.  So it’s no surprise that as he racks up win after win and builds a stellar national profile ahead of a potential presidential bid as early as 2024, they are already demonizing him, attempting to destroy him.

The problem for them, apparently, is that there aren’t enough actual problems with his agenda or governing because they resort to just making things up and reporting their fantasist nonsense as “news.”

Case in point, Washington Post ‘reporter,’ Hannah Dreier, took to Twitter to “report” a completely bogus, fact-free narrative that following the collapse of the condo in Miami-Dade county, DeSantis refused to allow FEMA in to . . . well, that part’s not clear.  Apparently, Drier imagines that FEMA is some kind of first responder force that responds to local events like the fire department or law enforcement.

There's a saying in emergency management: The first 24 hours are the only 24 hours.

FEMA was ready to deploy to the condo collapse almost immediately, and included the crisis in its daily briefing, but didn't get permission from Gov. DeSantis to get on the ground for a full day. pic.twitter.com/rVmCN47sQJ

This is absurd. Miami-Dade has some of the best emergency response and management people in the country and were on the scene immediately. This is another framing around the myth that FEMA acts as first responders. https://t.co/77lBZQ4Ajm

FEMA isn't an invading force, it doesn't need permission to show up. Also, they don't do search & rescue, they do logistics/support. There's no need for food & water delivery, nor is there a need for supply lines. Do you know…anything? Aside from DNC talking points, I mean? https://t.co/wepFnjz9ZC

Embarrassing for a “reporter” with such a once-prestigious outlet as WaPo to be so ill-informed, but she’s either really that ignorant (and can’t figure out to use to Google search) or she was acting with DeSantis deranged malice.  Neither is a good look for a supposed journalist.

But it gets worse, not only does Dreier imagine that FEMA is some sort of first responder, but she has no idea how the chain of response works from local, to state, to federal.

Time to kill another conspiracy theory:

The mayor didn’t sign an emergency order until 4:33 pm ET. The governor signed one less than an hour later, at 5:32pm. https://t.co/5cVl1YPFQs pic.twitter.com/uXMubrKxEs

In fact, the Democrat mayor of Miami-Dade refuted this crazy #FakeNews on Meet the Press stating that the state of Florida “has been here in force” since the beginning and that “we’ve not lacked for any support.”

What you're implying was debunked by the Democratic mayor of Miami-Dade County on Meet the Press this morning:

"Not only has the state of Florida been here in force (…) we've not lacked for any support."

Ultimately, of course, this “journalist” completely discounts all local, county, and state officials and first responders because to the left, the federal—the central and only recognized—government is king.  If the feds in FEMA gear aren’t there handing out water and filling out forms in triplicate, nothing is happening.  This is an insult to local, city, and county government, which in Miami-Dade is largely Democrat.

It’s remarkable to watch this Washington Post reporter use a slide from 3 hours after the building collapsed as some kind of smoking gun that DeSantis was letting people die, as if there is no emergency response beyond the federal level and the rubble was just sitting for 24 hrs https://t.co/jXSVEQnAoZ

While the goal was to bash DeSantis, the effect is to bash local, mostly Democrat, elected officials.  Oops.

Now we will have to put the masks back on the fight the DSD pandemic,

“That he’s also Hispanic is the final insult against the leftists’ deliberately divisive ‘demographics are destiny’ racist hate-mongering machine.”

“DeSantis” sure doesn’t sound like an Hispanic name. And his Wikipedia profile says that he’s of Italian lineage.

I’m – technically. – Asian, African American, and Hispanic. German surname that could also be Scottish, Irish, or English. So, one can’t tell.

Isn’t the essence of America’s melting pot that we are mostly mongrels? I am a quarter native American, half German, and several others for the last quarter,

What matteres is or culture, education, work ethic and gumption. That is the source of our prosperity.

My son’s best friend is white as the proverbial alabaster with brown eyes and brown hair. Her mother is dark skinned indigenous mexican and father is Danish/Germanic ancestry. She ALWAYS has to tell people she is hispanic, although one would think the fluent Spanish, even in Texas, would at least make people guess at it.

It is incredibly hard to guess, just looking at people and even by their surname.

I’d have to carry around a foldout poster sized billboard to cover all my various ancestries.

I think we are all a big mix at this point. I am 100% of european ancestry, but I have never met a single person who doesn’t think I am at least half asian. Turns out my Y chromosome goes back to Europe before the Indo-European migrations.

It is crazy we try to pin ourselves as this tribe or that tribe in our country.

I am one of God’s children.

The Washington Compost knows exactly what it is doing. No mistake was made, they just make shit up. It is all they do, ever.

The WaPoo, like most of the MSM has become totally Sovietized. As Solzhenitsyn observed,

And not long ago he was being blamed for the deaths at a pride parade (because it must have been an act by a Trump/DeSantis supporter with nefarious intentions). before word got out that the person responsible was a member of the local gay men’s chorus who was driving while intoxicated.

And hey, WaPo person, how about having your employer focus on local news for a change? Everyone and their pet canary who lives in the DC area knows the WaPo is not the place to go on a regular basis for coverage of local news.

The driver was not intoxicated. It was a plain honest accident.

Since this building has been falling for a decade be p[retty hard to nail just Ron for the failure.

The building hasn’t been falling for a decade. The land under it has been sinking, as is very common, and nobody who knew about it thought it a cause for alarm.

You have no idea what you are talking about. None. Zero. Nada.
The building was failing and it was known. The owners knew it was failing and they chose to ignore it. Lots of condominium projects in Florida have been rehabbed to solve problems. Many were poorly built during the boom of construction.

The alarm was raised. They ignored it because the initial estimates of repair were costly to the tune of $60,000 + per unit.

Yep. According to Channel 6 in Orlando: “That cost estimate, from the Morabito Consultants engineering firm in 2018, meant owners at Champlain Towers South were facing payments of anywhere from $80,000 for a one-bedroom unit to $330,000 or so for a penthouse, to be paid all at once or in installments. Their first deadline was July 1.”

Thanks, haven’t seen that particular estimate. I just went with the total estimate divided by number of units. And of course there is something unstated, none of the projects ever* happen without finding even more damage once the outer layers are uncovered. It often doubles the original costs. My sons company did a number of these condo rehabilitation’s in Florida and South Carolina. It was always worse than expected. He will not touch them anymore. They found steel beams so corroded the original structural strength had been degraded over 50%. Concrete was installed without the rebar reinforcement, and often the rebar was corroded to the point of being useless.

*yea, there is an exception somewhere

Florida knows how to make and follow a disaster management plan, given the weather alone. It’s odd to me that so many states (and people) seem to want to sit around, manage things poorly and then blame the Federal government for not stepping in without an invitation. You’d think they have no idea how these things are supposed to work. Or maybe this is just how we have been training people to think lately?

WaPo isn’t blaming the federal government. Last year they would have, but remember that’s on their side now, so it must be someone else’s fault. This time they’re blaming the state government for not issuing that invitation (which is the exact opposite of the stance they took on Hurricane Katrina). And their complaint is just as bogus.

The first sentence is factually wrong about DeSantis. He’s many good things but he is not charismatic.

He’s very awkward on TV and on the stage. It’s why he very nearly lost to a terribly reviewed former small town mayor (who also was caught sleeping with a meth-overdosed dead gay prostitute).

Americans, Republicans are once again going to have to decide whether they want a proven fighter or another slick politician who looks good on TV.

You’re entitled to your opinion, but it is not one shared by most people.

Democrats would vote for a man caught sleeping with a meth-overdosed dead gay prostitute. And that explains why elections can be close, and cheating explains it further.

“FEMA was ready to deploy..almost immediately…” One thing I haven’t seen mentioned is what assistance FEMA was poised to bring. The briefing slide clearly says there were more than 74 first response units on scene. What more was needed that the locals didn’t already have? We’re talking about an actual emergency area of about a city block with impacts extending to a few surrounding blocks or streets. And just because it got a mention in a morning watch center briefing didn’t make it a national emergency on a scale with a hurricane or earthquake or half-state wildfire.

This so-called journalist was obviously just looking for something to rag on DeSantis for and this briefing slide fell into her inbox.

FEMA largely depends on local government/groups to distribute any relief. My father (GSA, not the bathtub and shrimp guy)was one of the people who sent a ton of relief supplies down the river to NO within teo hours of the levee failure. Those supplies were never recorded as received.