Rep. Byron Donalds to CNN: ‘As a Black Man in America, I’m Allowed to Have My Own Thoughts’

Rep. Byron Donalds to CNN: ‘As a Black Man in America, I’m Allowed to Have My Own Thoughts’

Donalds’ office: “The bar isn’t very high for those on CNN. They usually aren’t interested in telling the truth. They are solely focused on their narrative…” 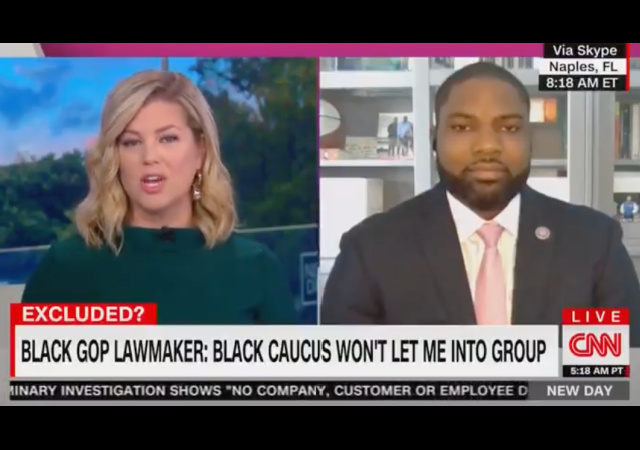 Florida Republican Rep. Byron Donalds accused the Congressional Black Caucus (CBC) of denying him membership because he is a member of the GOP.

Donalds is one of two black Republicans in the house.

Donalds spoke about the allegations on CNN. You know how it went.

Instead of acting like a journalist, Brianna Keller played the sympathetic liberal to the CBC:

However, Keilar spent much of the interview fixating on his past support for former President Trump and various voting rights bills she alleged would restrict minority voters, suggesting those factors may be “incongruent” with the CBC’s mission.

“As a Black man in America, I’m allowed to have my own thoughts on who I choose to support and who I choose not to support,” Donalds responded, after criticizing Keilar for cutting him off mid-answer. Donalds said his opinion of Trump is “irrelevant” to the debate over his relationship with the CBC.

CNN patronizes Rep. @ByronDonalds, a black GOP congressman, after he calls out the @TheBlackCaucus for denying him entry.

Keilar: Your ideas are “incongruous” with their “mission"

Donalds: "As a black man in America, I’m allowed to have my own thoughts" pic.twitter.com/vN9j4KXpNh

Are you kidding me? Donalds’ office tore into CNN and Keilar:

“We were well prepared for her to set multiple traps for the congressman to try and fall into, which he handled with ease,” Donalds’ communications director Harrison Fields told Fox News. “There is no doubt [W]hite liberals can’t comprehend how [B]lack people could be Republicans, especially Trump supporters, so I wouldn’t say that was surprising it was just publicized. She also was obviously justifying the CBC for denying my boss, but that was also not a surprise.”

Fields went on to blast CNN as a network and their obsession with pursuing its anti-Trump “narrative.”

“The bar isn’t very high for those on CNN. They usually aren’t interested in telling the truth,” Fields said. “They are solely focused on their narrative, which, since Trump has been out of the White House, has been to continue to demean and damage his reputation.”

ICYMI: This morning, I joined @CNN to discuss the importance of diverse thought and political ideology in the Congressional Black Caucus. As a young Black man born into the inner city, my perspective and conservative ideals should be welcomed to the CBC, not ignored. Watch below. https://t.co/dlc9xSXBWT

Fields said he spoke to three CBC members about Donalds joining them. So far they’ve only given them the “cold shoulder.“

One of the highlights of the last five years is watching those substantial black men find their conservative voices.

This is how we put an end to the patronizing racism of the Democrat Party.

What black men? Joe Biden says if they didn’t vote for him they are not black.

Wish he were my Congresscritter!

I wanted to reach through the video screen and shake his hand, all while I B!tch [email protected] that CNN “interviewer” who kept opining rather than getting to the facts of the matter.

It’s not quite that simple. The way it works is, if you appear to be black but don’t follow the progressive script then you’re declared to be not really black at all.

So much left-wing “thought” seems to be little more than opportunistic language games. In this case, “black” (or at least “authentically black” is being redefined as, appearance + culture + politics.

Viewed from 50,000 feet, declaring who is and who is not “authentically black” appears to be stunningly arrogant, but that doesn’t seem to be slowing down the attempt.

In our Brave New World it seems that even African-Americans may be white supremacists. Racist oppression is everywhere- even where you might least expect it!!

Yes you can have your own thoughts. As long as they conform to what is expected of you.

You can have them, but they will make you pay for them.

“Good” diversity is only skin deep these days. You can look as different as you like, but you have to be otherwise an absolute automaton toeing the Leftist line on every issue.

“As long as they conform to what is expected of you.”

A variant of the old story told about colors for Henry Ford’s cars, “You can have any color as long as it’s black.”

in which case they are not his own thoughts, they are the thoughts of others that he is allowed to repeat

Brianna seemed confused. Her line of questioning was premised upon the belief that to be authenticity ‘black’ requires a particular worldview not shared by Congressman Donalds.

Pretty sure that generalizations about ‘race’ are supposed to be verboten. Maybe condescending, progressive, ‘white’, female, journalists get an automatic pass on overt racism? Did CNN double check that presumption with the CBC before hand? Must have based on the lack of condemnation from the CBC. Good to know.

One might even say she was “whitesplaining” if one were inclined to say such things.

He ain’t black if he didn’t vote for Biden. At least not in the eyes of the “not-at-all-racist” CBC.

As a white man born and raised in a formerly Confederate state, I say he can have his own opinion and expect respect for it. It makes no difference what he looks like. His views are his own and he is entitled to express them.

Brianna (shorter): shut up and get back on the plantation.

As an old, white Redneck: I love this guy. We need more like him.

If you like him, wait until you start hearing more from Mark Robinson who is the current Lt. Gov. of North Carolina.

I saw his video and was vaguely aware that he ran for office. Good things do happen. I live in CA, “voting” here is a waste of time. Charles Manson (D, Dead) wins in a landslide. I “vote” by giving a few bucks to people outside the state that I think might make a difference. Robinson will get whatever I can spare. I will support him for whatever he runs for.
Last time, my main efforts were Burgess Owens (we won on that one, just barely) and Kim Klacik (knew that was hopeless, but gave it a try).
Robinson and Donalds are at the top of my list for next go around.

Oh man, I just can’t wait until the black population finally rises up and demands the liberals give Byron the respect due to him and demand the democrats quit being racists.
Of course I’ll be waiting for a loooooooooooong while.

He’s my Congressman and I want to keep him.

Based on this, the CBC should be more appropriately named the “Congressional Leftist Black Caucus,” as their leftist mindset is a prerequisite that supercedes a persons “color.”

Secondly, is the very white, blonde CNN “reporter” actually telling a black man what he is supposed to be thinking?

The MSM only use “victims”when they play along.

All gays, lesbians, Jews and people with darker skin are welcome, as long as they repeat the political commissars.

None of this is new.

☭
” All counter revolutionary’s must meet in front of the wall at sun set “.
☭

The left treats blacks as sacred objects. The right shouldn’t copy that.

I’d go along with “As a man in America, I’m allowed to have my own thoughts.”

If there’s one thing the Democrat Plantation won’t tolerate it’s an uppity…. uh… what’s the word? Wait! It’ll come to me. Eventually.

I think he was supposed to say “Yes Massa” to this thick-headed imbecile.

A CNN slave catcher tries to effect an “Order of Removal” to return a slave to the plantation.