Haley: Biden’s “falling over himself to get back into the Iran deal is pretty disgusting.” 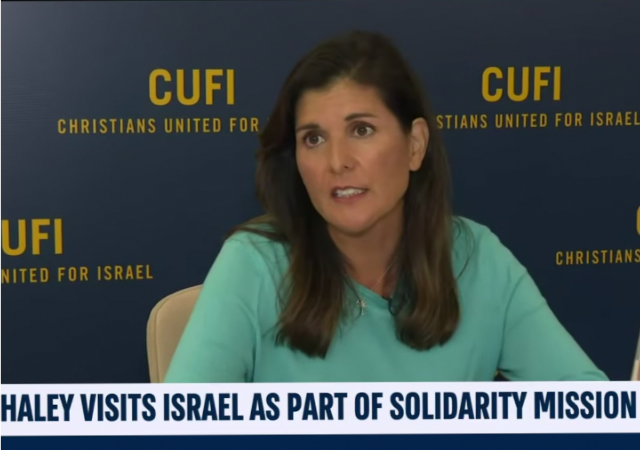 Former U.S. Ambassador to the United Nations, Nikki Haley, has sharply criticized President Joe Biden’s push to reenter into a nuclear deal with Iran. The Biden administration, China, Russia, and some European powers “looking to figure out how to redo this Iran deal is nothing more than a death wish for Israel and eventually a death wish for the world,” Haley said during her three-day visit to Israel.

Haley’s warning comes as the Biden White House moves towards restoring the Obama-era deal with Iran. On Monday, the Shia-Islamic regime claimed that it had reached a “broad agreement” with the Biden administration on lifting U.S. sanctions “on Iran’s industrial sectors, including energy,” Bloomberg News reported.

Reentering the Iranian nuclear deal is a “death wish” for Israel and the world, former US ambassador to the United Nations Nikki Haley warned Monday.

“The idea right now that you have multiple countries around the world, including the United States, looking to figure out how to redo this Iran deal is nothing more than a death wish for Israel and eventually a death wish for the world,” she said during a conversation with a select group of reporters from her Jerusalem hotel. (…)

Haley lashed out at the Biden administration’s recent efforts to engage with the Islamic Republic, saying Biden’s “falling over himself to get back into the Iran deal is pretty disgusting.”

Pastor John Hagee, a prominent U.S. evangelical leader and founder of Christians United for Israel (CUFI), accompanied Haley to Israel. The visit is “part of a ‘solidarity mission’ to the U.S. ally — just as Democrats are fighting among themselves over their positions on the conflict between Israel and the terrorist organization Hamas,” Fox News reported ahead of the trip.

Haley, who served as the U.N. envoy under President Donald Trump, has been an ardent supporter of Israel on the international stage. During the Trump years, she was instrumental in cutting the funding for the corrupt Palestinian refugee agency UNRWA and pulling the U.S. out of the U.N. Human Rights Council, a body used by the Islamic and leftist regimes to smear and attack America and Israel.

Time with Prime Minister @netanyahu is always invaluable.  His contributions to Israeli security and prosperity are historic. We have not heard the last from him. pic.twitter.com/RX9PVzVl64

The CUFI delegation also met with the country’s newly appointed Foreign Minister Yair Lapid, who thanked them for their “unwavering support for the State of Israel.”

If Biden wants to have nuclear war in the ME, there is nothing better that he can do than to bring back that agreement. The man is a senile old fool. Israel, and perhaps the KSA, will not stop at anything to shut Iran down if it gets any closer. So far, Israel has been doing a good job with its covert operations. Sadly, it may feel that it needs to do something much stronger at some future point in time. Bush was an idiot for not giving Israel the green light to take out the Iranian nuke reactor.

Yippie. Another Franz von Papen Republican pretends she is on our side – and thinks we will believe it.

Maybe the country wouldn’t be in the precarious position it is in now if you and other von Papen Republicans hadn’t colluded to help the Biden* regime steal the election. Were open borders, “green energy” and showing the Deplorables the middle finger that important to you, Nikki – enough to sacrifice your integrity and honor?

Enough with the Chamber of Commerce crooks like Haley!

If Haley didn’t stab Trump in the back, we wouldn’t be in the situation that she is suddenly complaining about.

I knew from Sundowner’s get go Israel was going to get screwed, the Leftists have the upper hand and by nature they are antisemitic so it wasn’t hard to see the future.

What never ceases to amaze is the mindset of the Jewish liberal, who works breathlessly to enable their destroyer.

It is odd, it seems that most people have trouble reevaluating their situations, and raw intelligence does not seem to help them do so.

Jews have been huge supporters of black causes, and that was justified duringthe50-60s time frame, but it is not justified today, in that blacks have become increasingly racist.

When Democrats were less radical, Jews support of them may have been reasonable, today it is not. Seeing what is happening, are they going to wake up in time?

Progressives would secretly be rejoicing while they feigned sorrow, if a mushroom cloud appeared over Tel-Aviv. They believe Israel deserves nuclear destruction.

If that were to happen, then there a many members of Congress who deserve to be dropped far enough from ground zero that they would have time to contemplate their actions, before they died from radiation. That would be a small measure of justice.

I’ll give her credit for being a good UN envoy. But I will never vote for her for POTUS. She might make a good University President. Better than Napolitano.

Get lost Haley, nobody outside the RINO cruise ship crew cares what you think anymore.

Thanks but no thanks for bailing on Trump and almost 80 million conservative voters. Enjoy the early retirement.

Haley is 100% correct.
Still not voting for her in any Republican primary.

Why do we even care what this RINO has to say ? Yesterday’s news.