UNHRC voted overwhelmingly to open the Gaza probe backed by China, Russia and the Organisation of Islamic Conference (OIC). 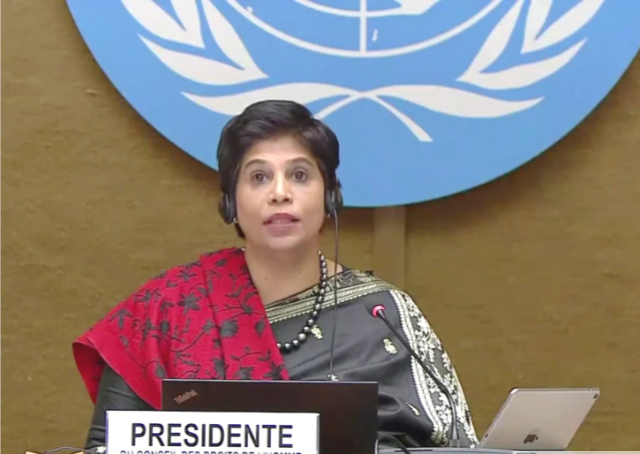 On Thursday, the United Nations Human Rights Council (UNHRC) overwhelmingly voted to set up a permanent commission of inquiry to probe alleged “war crimes” committed during the recently-ended Gaza conflict.

“Muslim countries are calling on the United Nations to investigate possible crimes committed during the 11-day conflict,” Reuters reported ahead of the vote. Pakistan and the Palestinian delegation at the UN initiated the push to open a probe against Israel. Palestinians and the Organisation of Islamic Conference (OIC), representing 57 Muslim states, tabled the UNHRC resolution.

The Gaza-based Islamic terrorist group Hamas, which fired thousands of rockets at Israeli civilians during the latest round of hostilities, welcomed the investigation. They called upon the UN member states to take “immediate steps to punish” Israel.

Several European and African countries voted against the resolution. The United States, which does not have a seat in the UN rights’ council, had opposed the special session mainly called to slam Israel.

The Associated Press reported the outcome of the UN vote:

The top U.N. human rights body on Thursday passed a resolution aimed to intensify scrutiny of Israel’s treatment of Palestinians, after the U.N. rights chief said Israeli forces may have committed war crimes and faulted the militant group Hamas for violations of international law in their 11-day war this month.

The 24-9 vote, with 14 abstentions, capped a special Human Rights Council session on the rights situation faced by Palestinians. The session and the resolution were arranged by Organization of Islamic Cooperation countries, which have strongly supported Palestinians in their struggles with Israel.

The resolution, which was denounced by Israel, calls for the creation of a permanent “Commission of Inquiry” — the most potent tool at the council’s disposal — to monitor and report on rights violations in Israel, Gaza and the West Bank. It would be the first such COI with an “ongoing” mandate.

The commission is also to investigate “all underlying root causes of recurrent tensions, instability and protraction of conflict” including discrimination and repression, according to the text. Amid signs that the resolution would pass, its authors added more teeth to its language with a late revision on Wednesday. (…)

Israel had called on “friendly” countries to oppose the meeting, and the United States — while not a member of the 47-member state body — did not take part, even in its status as an observer state. An array of countries denounced the latest violence and urged efforts to address the roots of the Mideast conflict.

After the vote, the U.S. mission in Geneva said the United States “deeply regrets” the move to create an “open-ended” Commission of Inquiry. It said some unspecified member states of the council “have chosen to engage in a distraction that adds nothing to ongoing diplomatic and humanitarian efforts” in the region.

The UNHRC, dominated by leftist dictatorships, Third-World failed states, and Islamic countries is a forum for bashing the U.S. and its allies. Last November, some 120 UN member states ganged up to “scrutinize” the U.S. human rights record.

In that bizarre show, the Chinese delegate asked, “[w]hat measures has [the] U.S. taken to eliminate systematic racism, racial discrimination, white supremacy, religious intolerance and xenophobia?” The genocidal regimes of Iran and Syria were among those who rose at the session to condemn the U.S. record on human rights.

After the U.S., the Jewish State is the favorite target for the UNHRC.

Israel’s President Reuven Rivlin called the UNHRC vote an “inexplicable decision against Israeli citizens who faced the criminal fire of thousands of missiles against innocent civilians.”

Israel’s Foreign Ministry immediately stated that it had no intention of cooperating with the probe.

“Once again, an immoral automatic majority at the Council whitewashes a genocidal terrorist organization that deliberately targets Israeli civilians while turning Gaza’s civilians into human shields.

“This while depicting as the ‘guilty party’ a democracy acting legitimately to protect its citizens from thousands of indiscriminate rocket attacks. This travesty makes a mockery of international law and encourages terrorists worldwide,” he said.

Ahead of the session, Geneva-based watchdog UN Watch noted the anti-Israel bias at the UN rights body:

This will be be the ninth special session targeting Israel since the UNHRC was founded in 2006.

Of the other special sessions that condemned countries, there have been 5 on Syria, 3 on Myanmar, and 1 each on Central African Republic, Libya, Cote d’Ivoire, DR Congo, Sudan, Burundi and South Sudan.

Nikki Haley, who, as UN ambassador during President Donald Trump’s watch, oversaw the U.S. withdrawal from the UNHRC three years ago, tweeted in support of Israel.

The UN wants to investigate Israel for defending itself but conveniently leaves out any mention of Hamas and the 4,300+ rockets they fired at Israeli civilians.

I've said it before, and I'll say it again: the UN Human Rights Council is a sham.

In June 2017, Haley called out the UNHRC’s obsession with Israel. “[T]he Council has passed more than 70 resolutions targeting Israel. It has passed just seven on Iran. This relentless, pathological campaign against a country that actually has a strong human rights record makes a mockery not of Israel, but of the Council itself,” she said.

The biggest losers of the UN probe will be the Palestinians, particularly the residents of Gaza, who are used as human shields by the jihadi terrorist groups. Palestinian terrorists fired rockets from residential neighborhoods and hid weaponry in populated areas. Hamas and its terrorist allies fired over 4500 missiles aimed at Israeli towns and cities, out of which 610 landed inside Gaza, causing significant civilian deaths.

What a farce. The best course, IMO, is to pursue an alternative organization of Nations who are committed to basic norms; a legitimate constitution, rule of law, private property, intellectual property, an independent judiciary that ensures adherence, free and honest elections, equal individual civil rights, ECT.

In essence the US, Canada, Mexico, Japan, Taiwan, Singapore, Australia, NZ, India, GBR and the EU nations.
Everyone else can send a non voting representative. When they reform to meet the standards for admission they can be admitted as voting members.

Pull out of the UN and stop funding all the kleptocrats.

If you’re going to let Canada in under those criteria, you may as well allow Syria and Iraq.

Calling this a war is one of the biggest crap moves of this whole thing. Palestine is not a sovereign nation and Hamas is neither its government nor its military. This was not war and should not be bound by such conventions. This was simply snuffed out terrorism.

Don’t be a sucker. This is not about land. It is about Religion.

Ever since the Cold War our enemies have realized that America’s generally affable national persona and open society arw the keys to our demise.
We now have 2 generations who have been educated in leftist government schools. That output now occupies positions of power throughout the embedded bureaucracy, especially at State and the UN.
Their disdain and even hatred of our once proud American values and role in the world are all too evident.
We have a long fight ahead…

Years ago, way back in the 1960s, the John Birch Society started its Get US Out of the UN & Get the UN out of the US.

But the GOP allowed Obamacare to remain intact.

It was the RINO arm. I guess you missed the backstabbing McCain vote.

McCain voted the way he did because his buddies in the GOPe were happy he did – and got the blame. Meantime, we had a GOP majority afterwards, and…. Nada.

Wow within 4 months Joe “where am I” Biden has turned the Middle East into a mess. The Chinese now completely control the United Nations, and keeps throwing the Democrats talking points in our face.

It’s all on purpose – all part of the plan to destroy us from within.

What a disgraceful farce. No investigation of Muslim supremacist/terrorist outfit, Hamas, for starting this conflict (as usual), by indiscriminately firing 4,000-plus rockets at Israeli civilians? Which is a textbook war crime.

No investigation of Hamas for sheltering weapons and missile launchers among civilians.

The dhimmi useful-idiots, Muslim supremacists and tyrants are running the U.N.

Chairman Xi-den’s resurrection of vile, incompetent-narcissist Obama’s “leading from behind” foreign policy of dhimmitude, appeasement and capitulation to tyrants, is yielding bitter fruit, indeed. As predicted. What a disaster for freedom-loving peoples, everywhere.

Xi: “We’re pushing for an open-ended probe of Israel tomorrow in the UN. We need your cooperation.”

Biden: “Probes are good. Jill has a whole bunch. She leaves all over the place. When the maid comes in the morning, it’s as embarrassing as hell.”

Xi: “Not that kind of probe. An investigation. Against Israel.”

Biden: “An investigation? Don’t worry: I’ll get that prosecutor fired. But, Xi, it’s gonna cost you. Let me give you Hunter’s bank account number….”

Xi: “Money is no problem, but we don’t need anyone fired. You’ll get yours, but just be aware we’re spreading some money around to those little dictators. You just go along with it.”

Biden: “Sure, sure. Give ’em a choice, eh? One from Column and one from Column B. And Columb B is bad news, right, Xi?” (laughs) Say, Xi, my wife Jill the doctor is curious: what do they call Chinese food in China?”

Biden: “Why they call cups and saucers “China”.

Xi: “Because they’re made in Japan.”

Biden: “Wow. Interesting… Did you hear that, Jill honey?!”

Biden: “I heard a good one: Why is there no Disneyland in China?”

Xi: “No one’s tall enough to go on the good rides.”

Biden: “So you heard that one! I love it. Do you know this one? – What happens when a Mexican and an China man make a baby?…A car thief who can’t actually drive is born!” (laughs hysterically)…. (to someone in the room) No, Jill, you don’t look like a hooker in that outfit…”

Biden: “What do you call a Chinese woman with one leg?…. Irene!”

Biden: “Sorry, I was just thinking: why do you Chinese like the NBA but hate American football?”

Xi: “Because we spend most of the day making them.”

Biden: “Interesting… No, Jill, you don’t look like a slut in those stockings…. ”

Biden: “Okay, one more: How do you know if a Chinaman robbed your house?…. our homework is done, your computer is upgraded, but two hours later the little son of a bitch is still trying to back out of your driveway!…”

Hamas is like the youngest sibling. It breaks something and blames the older kids and the parents react in kind.

Another reminder that the UN is nothing but a bunch of antisemites. Funny how it is not a ‘war crime’ to fire thousands of missiles into civilian populations in Israel like Hamas does…..apparently that is just fine with the UN.

They are a pack of tin horns that we have been paying for years to play nice. Now the illegal regime has turned all that on its head.