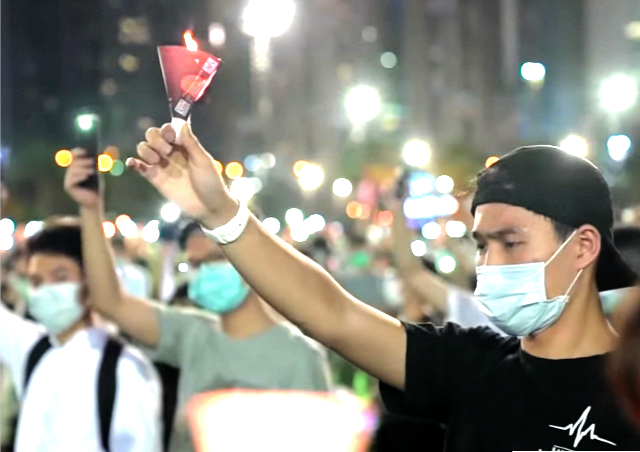 Thousand of people in Hong Kong came out to mark the 32nd anniversary of the Tiananmen Square massacre on Friday defying the orders of Communist China. The Hong Kong residents held vigils and demonstrations in memory of some 10,000 pro-democracy demonstrators who were murdered by the communist regime in 1989.

Hong Kong authorities had banned anti-regime demonstrations and threatened to detain dissenters, citing new security laws. Ahead of the anniversary, the Hong Kong Security chief warned people against marking the occasion in public. “According to the Hong Kong National Security Law, it is clearly stated that any person who organises, plans, implements, or uses illegal means to destroy or overthrow the fundamental system established under the Constitution of China is guilty of subversion of state power,” Hong Kong’s Secretary for Security John Lee declared.

Merely participating in the commemorations can be seen by the communist regime as an act of subversion, and thus punishable under the new security laws. “The seemingly innocuous acts carried huge risks for participants, with police warning those gathering in streets that they faced jail for unlawful assembly,” The Wall Street Journal noted.

Under the National Security Law, passed by the regime-appointed lawmakers in Beijing last year, Hong Kong dissidents can be taken to the Chinese mainland and punished under draconian communist laws.

Hongkongers commemorated the June 4 anniversary of the Tiananmen crackdown with scattered pockets of defiance on Friday, shouting pro-independence slogans on the streets, lighting candles and flashing their phone lights in public, or attending church gatherings, after a heavy police presence stopped them from holding their large-scale annual vigil for the first time in 31 years.

While police banned the traditional mass gathering at Victoria Park for the second straight year citing Covid-19 restrictions, this time they locked down the venue to prevent a repeat of 2020 when thousands still forced their way in to light candles in memory of those killed by security forces who crushed weeks of student-led pro-democracy protests with tanks and guns at Beijing’s Tiananmen Square in 1989.

But many took to the streets in scattered and highly mobile protests, playing cat and mouse with police in scenes reminiscent of the 2019 anti-government demonstrations. (…)

Some on the streets vowed to return in any way they could next year, while others were pessimistic about ever being allowed to again – an outlook shared by political commentators who said the national security law imposed by Beijing spelled an end to the days of the city being the only part of China to hold such mass protests on June 4.

The crackdown was expanded to the Chinese social media. “Chinese censors are working overtime to prevent citizens from commemorating the Tiananmen Square massacre by blocking the candle and cake emojis – typically used to mark the occasion online – from the Weibo social media platform,” the Business Insider reported.

Apparently, big tech also was enforcing Beijing’s dictates across the internet. “Microsoft Corp.’s Bing search engine blocked content in the U.S. deemed politically sensitive to China’s government on the anniversary of the Tiananmen Square massacre,” The Wall Street Journal reported. Microsoft called it an “accidental human error” and promised to correct it.

Hong Kong remains the last bastion of domestic dissent against Beijing. The communist repression and indoctrination have snuffed all hopes of mass demonstrations in the memory of the Tiananmen victims in the mainland.

The communist regime has little support on the ground in the former British crown colony. In 2019 Hong Kong elections, pro-Beijing candidates won only 60 out of 452 seats, losing control of 17 out of 18 city councils. The humiliating defeat only intensified China’s suppression of the pro-democracy movement.

I’m very certain Zuckerberg, Bill Gates, etal…, Hollywood, and the American MSM are doing everything in their power to enforce this ban.

I love the way they organized.

So they blinked their phone lights, lit candles, wore Guy Fawkes masks, and went to church.

Let us officially welcome Hong Kong patriots to the ranks of “whiteness.”
What are you drinking? The next round is on me.

It’s occurred to me that today’s constitutional crisis involving America’s unaccountable mandarinate may suggest that the Middle Kingdom’s malign influence goes back a bit longer than we are accustomed to thinking.

I wonder how LeBron feels about this?