An Anti-Pandemic Plan is a low-hanging fruit. If this is being touted, then how badly did the summit truly go with Biden at the helm? 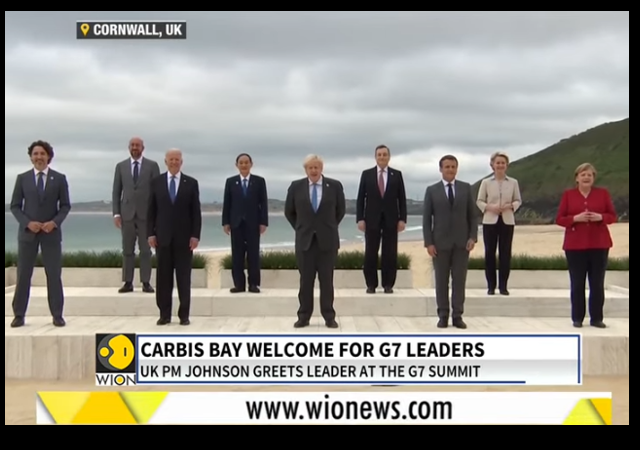 How desperate are the world’s leaders to show the return of global harmony after President Joe Biden has replaced former President Donald Trump?

Significantly, I should think, based on the signature piece of work the leaders unveiled at the G7 Summit: An Anti-Pandemic Declaration.

G7 leaders on Saturday plan to sign a Carbis Bay declaration on health to prevent another global pandemic, according to a British government statement.

Under the declaration, the G7 leaders will be “vowing to take steps to ensure the global devastation caused by the coronavirus is never repeated,” the statement said. They will commit to using all their resources toward this goal when they meet in Cornwall for the second day of the G7 summit Saturday.

The declaration is a “historic statement setting out a series of concrete commitments to prevent any repeat of the human and economic devastation wreaked by coronavirus,” the British government statement said.

Just imagine the kings and queens of Europe had such foresight after the Bubonic Plague swept through in the 1300s! The world may have missed out on subsequent episodes of the plague…as well as smallpox, yellow fever, and the host of other pathogenic scourges through history.

I think we can comfortably assume most people oppose pandemics….except maybe the Chinese. China has plans to build 25 to 30 more biolabs like the one in Wuhan at the epicenter of the current pandemic.

China is planning to build dozens of biosafety level three labs and one biosafety level four lab over the next five years as investigators take another look at the possibility that the coronavirus could have leaked out of a laboratory in Wuhan, China.

But dealing with China would be difficult and not lend itself to photo-ops. So the international group’s plans double down on what has already been done:

The G7 declaration will spell out a series of concrete steps, including:

Each of those elements is full of trouble. While the speedy development of vaccinations is an excellent idea, pressing the public to take them while there is evidence of adverse health effects is dangerous. The global sequencing networks offered evidence of the laboratory manipulation of the coronavirus, but the elite media and compromised bureaucrats bullied scientists who asserted SARS-cov-2 was bioengineered until recently. Finally, few informed Americans will forget that WHO initially went along with the Chinese, saying the virus did not spread by airborne transmission.

Do you know what’s even better than the proposal? Why the contribution of the very experts responsible for the awful response in the first place.

According to the BBC report, the Declaration is “expected to incorporate recommendations from a report by a group of international experts drawn from across industry, government and scientific institutions”.

An Anti-Pandemic Plan is a low-hanging fruit. If this is what the leaders will tout, then how badly did the summit honestly go with Biden at the helm?

Joe Biden seems to get lost at the G7 summit in England, Jill comes to the rescue @JoeBiden @G7 @FLOTUS @USAmbUK pic.twitter.com/GFxGouRCoA

Maybe they included their secret bank account numbers to the resolution for donations of course. Sarc.

With the Big Guy getting his usual cut, of course.

Q: Will any of these changes take power away from China because of their irresponsible behavior regarding the current unpleasantness?
A: No

Q: So does this actually reform or strengthen WHO?
A: (Hysterical laughter)

Translation: “Eeek! The prolés are catching on! Let’s make some cosmetic changes and see if we can put them back to sleep!”

Maybe ask the impossible… “Build Back a Better Biden”

So the g-7 has gutted its economic and political leverage by becoming hopelessly dependent on China and Russia for its energy while also crippling its economies rendering them less and less capable of competing and feel now is the time to crack down on China?

Europe is doomed as we too will soon be if we don’t complete those 2020 election audits don’t soon. Trump won and we better be getting ready for the ugly fight ahead of us. Proving the election was stolen won’t be enough.

This is not insignificant. It’s a plan to make more global sweeping totalitarian measures the norm for things like masks, distancing, and lockdowns if deemed necessary by the overlords.

It’s a slam dunk for pretty much everyone in that photo op to be a control freak and want to do so. Big win for their power grabs.

G7 leaders on Saturday plan to sign a Carbis Bay declaration on health to prevent another global pandemic . . .

Uh, no. I don’t know how the media gets away with such nonsense. The “Carbis Bay declaration” will not prevent another global pandemic but outlines the revised process the Western elite will use to clamp down on the population across the Western world when, not if, but when the next global pandemic occurs. And have no doubt, another pandemic is in our future. And it will make SARS-CoV-2 look like a walk in the park. Guaranteed.

How much you wanna bet their “steps to ensure the global devastation caused by the coronavirus is never repeated” involve mandatory/forced vaxxes, surveillance up the wazoo, and a hefty dose of Big Brotherism to boot? Because “we’re from the government, and we’re here to help….”

Look at this utterly ridiculous charade display of “social distancing” and elbow bumps, by these utterly narcissistic, worthless, feckless, clownish, so-called “leaders.” Not a real man or woman in the entire bunch. Just a bunch of useless dhimmis and appeasers of totalitarianism, with our dim-witted, tottering, feeble-minded, dotard, Chairman Xi-den, bringing up the rear.

China, Iran, Russia, [insert Islamic terrorist group, here] must be rolling on the floor, in laughter, at the manifest weakness and fecklessness of western leaders. What a sad display.

What I wouldn’t give for a Reagan or a Thatcher.