“Try to avoid words and phrases that may be considered offensive, pejorative, or prejudiced (whether consciously or unconsciously), as these can distract your audience from the ideas/information you’re trying to convey” 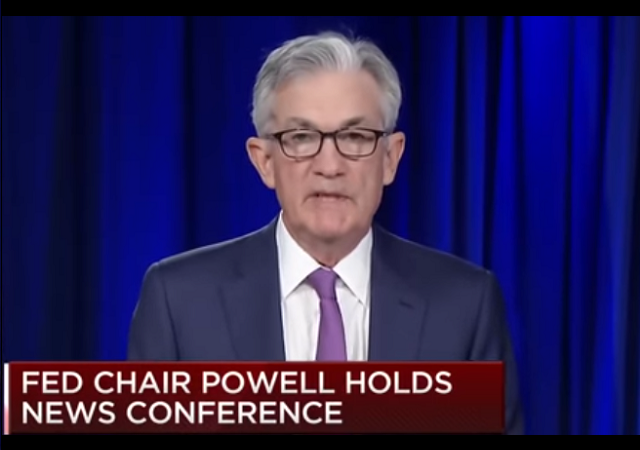 And the absurdity just keeps coming.  The latest organization to act as the speech police for its employees is the Federal Reserve.  The Fed’s employees are reportedly being trained to “avoid bias” in their language, including avoidance of terms like “Founding Fathers” and “grandfathered.”

The Federal Reserve has instructed employees to adopt “bias-free language” and avoid using biased terms like “Founding Fathers,” according to an internal webpage obtained by Fox News.

The Federal Reserve’s Board of Governors issued the guidance for all employees nationwide on April 29, a former Fed staffer with knowledge of the matter told Fox News.

“Try to avoid words and phrases that may be considered offensive, pejorative, or prejudiced (whether consciously or unconsciously), as these can distract your audience from the ideas/information you’re trying to convey,” it continues.

The Fed also said the terms “whitelisted, “manpower,” “manmade,” and “singular generic pronouns” – such as “he,” she,” “his,” and “hers” – should be replaced with more “bias-free” alternatives like “allowed,” “artificial,” and pronouns such as “they,” “their” and “theirs.”

Part of that plan includes forcing employees to endure workshops and training in such topics as “unconscious bias, generational and cultural differences, and the employment of persons with disabilities.”

Strengthen understanding of the interrelationship between diversity, inclusion, and equal opportunity through education and training.
Actions

If there was a founding mother would it have been permissible?
Any government agency not woke yet?

It would be founding birthing person to adhere to today’s woke standards.

Agreed. Women do not exist, only birthing units.

And the Left has the temerity to call the Right misogynist!

This term “birthing person” brings back a distant memory. Some of the more strict sects of various religions see women as nothing but vessels for the seed of men; in short, they exist to make babies.

The feminist groups went right off the rails over this sort of talk.

Now, those with the same mindset are saying “birthing person”.

Please, someone. ANYone. Please explain this to me.

Hey Grizz…. probably shouldn’t say “person” either….. You’d be excluding those who identify as “them”…..

But, wait a minute….What about the “birthing thems” who identify as “hatchers”…?????

(Wow this is confusing)

Women who are pretending to be men are men who can give birth along with women.

Has everyone realized by now that the Democrats are not only un-American but Anti-American? They want to eliminate any of the things we’ve been taught as kids.

The American/Western Left are a bunch of deranged,self-hating nihilists. They blame society for their very existence and want everyone to pay for the emptiness and misery that is their meaningless, useless lives.

They are Marxists/communists hell bent on destroying our language, our culture, our history, etc. We must fight it with every breath with breathe.
As the Chinese born woman stated at the Loudon Co. school board meeting re CRT, “This all seems very familiar………….” like Mao’s cultural revolution. Because that’s what it is.
Step up people! Speak up!

Founding fathers isn’t offensive unless one is a Communist,perhaps the truth hurts.

Founding Fathers knew what it meant to be a father. Those promoting this crap do not know what it means to be a good father, or to be good mothers.

America really needs to put a stop to this.

It’s a part of the “difficult” discussion on race they want to avoid…..therefore the rest of us need to sag to their slovenly existence.

WTF, sorry I will Continue to use that phrase and any other American loving phrase I want to and am proud to.

Gonzo – I agree. No one should give an inch to these morons.
The Marxist’s Cultural Revolution must not succeed in the USA.

I will purposely use the “banned language” as much as possible to trigger the Marxists.
Ministry of Truth be damned.

One of these days, there is going to be an explosion of violence aimed at the government bureaucrats. And, those clueless idiots are going to wonder why?

Or, maybe not. After all, the Department of Education has it’s own SWAT team. And, the USPS is tracking our online posts.

I don’t look forward to any of this. Have we forgotten why we left England?

The next thing you know they will say fuzzy slippers is a biased term.

How about the term “useful idiot” as applied to Powell?

The words diversity and excellence cannot be used on the same page.

I have a better idea. Let all the woke losers in life who blame their bottom of the barrel status on language, go f*ck themselves and let the rest of us get on with living, advancing, creating and growing.

How about avoiding words and phrases non-Woke types consider offensive, pejorative, or prejudiced? Oh it’s acceptable to offend non-Woke types? Then why should the majority bother with the sensitivities of the perpetually offended? Seeing a White face is considered offensive by some. Should they wear blackface instead, or quit their jobcommunitylife?

I like how “bias-free language” is not itself biased in any way. Oh no. There is only one proper way to conduct yourself, and it is good. We can’t have wrongpseak.

Trying to understand why blacklist is bad. Somehow black is a bad word now. And white. I guess. Except when they’re not. White and black don’t even describe skin pigment properly, they should be eliminated completely, yes?

Racism – the new nonracism. Sorry. The new non-thing. We can’t even say the R word any more.

How about we say every word just by its first letter. That would make things easier. “Y-word” for yes, “I-word” for it, “W-word” for would. “P-word” for Problem “S-word” for Solved.

Scratch that. Let’s just get rid of language and just stare at each other or hide under the bed.

The corporate librarian in the early 80s passed up “Our Black Foremothers” for the library. That was before woke.

Actually, employees of the Federal Reserve would do well to completely avoid all references to the Founding Fathers, Founders, or whatever term is PC, lest they be immediately struck by lightning. With the exception of that crony capitalist Hamilton, the Federal Reserve is exactly the creature that most all of the founders wished to ensure would never arise.

We must never refer to Jerome Powell by the pronoun ”he”. The correct term is “non-birthing person”.

Hence forth father will be replaced with “sperm supplier”.

I disagree. The correct term is moron.

They are factually, logically wrong. “Bias-free” language actually DESTROYS diversity since it has as its unstated goal the obliteration of all distinctions.

It is the richness of gendered language that recognizes and celebrates diversity. Those who can’t handle this are not ready for the real world, let alone prime time.

“Try to avoid words and phrases that may be considered offensive, pejorative, or prejudiced (whether consciously or unconsciously) …”

If you use “offensive” terms unconsciously, how can you know to avoid them? These blithering idjits don’t even think their own instructions through.
.

They are just looking for excuses to fire whites.

I shall used unbiased terms in a niggardly manner from now on.

How about “Nation Birthing People”?

I guess there is no way to distinguish any longer between biological mother and surrogate mother. Temp head of OMB, Shalanda Delores Young, is defending “birthing person” in the budget because where she comes from it don’t matter who gave birth cause grandma raises the kids anyway.

“denied” is not remotely synonymous with “blacklisted”. “Legacy” is not nearly the same as “grandfathered”. And the Founding Fathers were all guys. All of them. Even aside from the fact that “Founding Fathers” is, itself, a term of its own, now. Sure … you can throw Betsy Ross in there …

Any woke institution is self-identifying as useless except to the ruling class. Perhaps this nonsense is further evidence that the Federal Reserve needs to be abolished.

It should be replaced rainbow interest rates.

In fairness there were some influential ‘Founding Mothers’ as well. Mercy Otis Warren comes to mind. She wrote widely read/viewed/discussed pamphlets and plays which undercut the royalist position during the revolutionary period.

During the debate over ratification of the Constitution, she wrote another widely read/quoted pamphlet opposing ratification unless a bill of rights was incorporated.

She and several other women were every bit as influential and important to the founding as other writers of the period.

That said, wtf? I am unsettled by a great deal of modern society. My personal likes and dislikes should not result in society being reordered to suit my personal preference. The narcissism of the d/progressive is boundless.

The founding fathers wrote and signed the Declaration of Independence, led us during the revolutionary war and wrote the Constitution.

That’s a very narrow gate you are arguing for.

The Declaration was written by Jefferson, Adams, Franklin, Livingston and Sherman. That’s 5 people.

The Declaration has 56 signatories.

Wrote the constitution? The main authors are Jefferson, Adams, Paine and Madison. Only 39 of the 55 delegates signed the Constitution at the Philadelphia Convention.

Your narrow gate completely discounts the Federalist Papers and the influence of Hamilton and Jay. Not to mention the contributions of anyone else who spoke and wrote in support and therefore influenced others to support passage.

IMO, your criteria is far too narrow. You exclude the contributions of the Sons of Liberty, the huge influence of the corresponding societies, all exclusively State/Colonial level actors and every other person who didn’t Command an Army, write or sign the Declaration or author the Constitution.

That’s a very elitist viewpoint, IMO, which refuses to acknowledge the contributions of the common Soldier and Common Citizens. As a single example, Paul Revere is excluded under your narrow criteria.

My new favorite phrase is “you’re offended? So what?”

This “guidance” is going to be problematic when they have to come up with a more “inclusive” word for …STAGflation.