“The DOJ said Saturday it will not longer secretly seize journalists’ records as part of leak probes.” 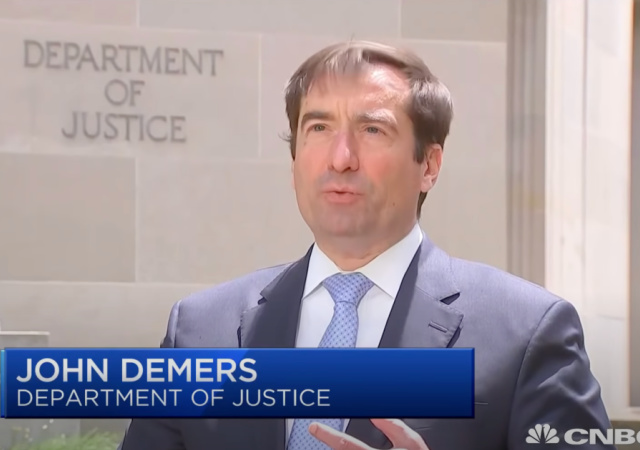 John Demers, the chief of the Department of Justice’s national security division, will leave his position by the end of the week:

Demers’ imminent departure comes as the DOJ is under fire for searching electronic records of reporters at major national news outlets, including The New York Times, The Washington Post and CNN, and those of some Democratic lawmakers as part of investigations into the leaks of classified information. The lawmakers included Rep. Adam Schiff, the top Democrat on the House Intelligence Committee.

Demers oversaw those investigations, which occurred during the administration of President Donald Trump.

The DOJ said Saturday it will not longer secretly seize journalists’ records as part of leak probes.

A department spokesman said Demers revealed his plans to leave his job months ago, before the scandal erupted over the probes.

Politicians hate a free press. Remember what President Barack Obama’s administration did to Fox News’s James Rosen? They monitored him and even called him a “criminal co-conspirator.”

As I stated during my confirmation hearing, political or other improper considerations must play no role in any investigative or prosecutorial decisions. These principles that have long been held as sacrosanct by the DOJ career workforce will be vigorously guarded on my watch, and any failure to live up to them will be met with strict accountability. There are important questions that must be resolved in connection with an effort by the department to obtain records related to Members of Congress and Congressional staff. I have accordingly directed that the matter be referred to the Inspector General and have full confidence that he will conduct a thorough and independent investigation. If at any time as the investigation proceeds action related to the matter in question is warranted, I will not hesitate to move swiftly.

Garland also told the Deputy Attorney General to “evaluate and strengthen the department’s existing policies and procedures for obtaining records of the Legislative branch.”

Do you notice anything missing? I see Garland only refers to members of Congress. How about some outrage over tracking the media? That should tick off people more than congresspeople.

Demers is one of the few people remaining from Trump’s administration. He wanted to leave on January 20th, but the DOJ’s current leadership insisted he stay on the job. He told his bosses constantly since then that he wanted to leave when his children started summer break.

No it will just jail them.

I thought Adam Schiff said it was just fine to collect phone records about people.

In a profession of professional liars and cads, it would be hard to think of anyone in Congress who lied and leaked more than the hyper-partisan Adam Schiff.

So he skates off, keeps his pension and probably winds up in another govt agency sucking the teat again?

When will some of these corrupt pricks go to jail?

Why shouldn’t he “skate off”? He did nothing wrong. How dare you call him corrupt? On what grounds? Do you have any reason at all to suspect him of ever having done anything wrong in his life? For all we know he’s more honest than you are. Or are you a Democrat who thinks anyone who worked in the Trump administration must be corrupt?

The DOJ and other three letter agencies have gotten completely out of hand with their snooping and seizing of records and information without valid warrants. The last time I checked we had one or two items in the bill of rights that supposedly make this type of crap illegal. Yeah, a lot of reporters are scumbags, but they have rights too. So this guy supposedly “oversaw” investigations into this behavior. What became of those “investigations? Crickets, that’s what.

Unfortunately the issuance of a warrant is a very low threshold. The prosecution and LEO don’t have to provide any exculpatory evidence or any evidence that contradicts the story they are telling A Judge.

The Judge, in practice, is a rubber stamp once the paperwork is filled out. They could always ask to see any potential exculpatory evidence but they almost never do.

The DoJ doesn’t have a problem getting warrants nor any other prosecutor so I don’t think your argument about the absence of warrants holds up very well. Getting a warrant simply isn’t a burden it’s largely an exercise in check the block paperwork.

CommoChief, this was a subpoena, not a warrant. The right to obtain evidence by subpoena is fundamental to our system of justice.

Paul specifically decried ‘snooping… without valid warrants’. Which is what I addressed.

That is garbage. There is NOTHING in the constitution against a valid subpoena for evidence of a crime. If there is good reason to believe you have evidence that is useful to anybody in litigation, let alone a prosecutor investigating a crime, they are entitled to a subpoena for it, and/or to your live testimony. Without that our entire legal system would not work. And the founders certainly had no intention of abolishing it.

Milhouse,
I agree with you and read about this yesterday (I have not read anything today so might have missed something)

Why should we be upset about legal subpoenas on reporters when the same reporters are publishing classified documents? Unless, of course, these leaks are coming from Democrats….

“How about some outrage over tracking the media? That should tick off people more than congresspeople.”

Not really feeling the outrage myself.

Seizing records to plug felony leaks? How exactly is that a problem? Oh yeah, the “heat” they are catching is from journalists. Big frickin surprise.

I’m not seeing the scandal here. So the DOJ suspected Schiff and Swalwell of leaking. Well? Were they right? I notice none of those howling in outrage bother denying it.

Whether they were or not, apparently there was enough evidence pointing to them to convince a judge to sign the subpoenas. Sure, that’s a very low bar, considering how many judges don’t bother with their duty of independently determining probable cause, but it seems high enough for the purpose of this stiffish breeze in a soup tureen.

Is there a reason congressmen credibly suspected of crimes should not be investigated?! Should being in congress give them an automatic get out of jail free card?!

As for the reporters, what makes them different from anyone else? If you or I publicly announced that we knew who had committed a crime, you can bet our records would be gone through. If we’d admitted to receiving stolen goods any judge would agree that our records were likely to contain clues about the thieves’ identities, and therefore that they ought to be searched. Why should the same not apply to people who happen to work for a TV network?

Do we all remember when Adam Schiff thought it was just a great idea for him to subpoena Congressman Devin Nunes’ phone records so he could release them in a congressional report? Likewise, do we remember when Schiff would walk out in the middle of closed door committee sessions so he could leak to the press? And do we remember that the only reason he wasn’t arrested and forced to resign was that what he was leaking to the press were absolute lies?

On your first point, the leak investigation never established much in terms of who was leaking. So I’m not really clear on why a denial is necessary.

In terms of scandal spying on a separate branch of government and journalists is not necessarily illegal but certainly dangerous territory. Congress is supposed to hold the executive to account in certain respects that’s part of its responsibility. The same applies to newspapers. Part of journalism is protecting sources and whistleblowers which is pretty important.

If you want to disclose America’s top secrets like troop movements or nuclear weapons positioning, just give it to the media, any media.

Biden has ordered that the Department of Justice will no longer conduct criminal investigations of any leaks.

As long as the leaks are made to the “news media” ( American, Chinese, Russian? ).

“Going forward, consistent with the president’s direction, this Department of Justice — in a change to its longstanding practice — will not seek compulsory legal process in leak investigations to obtain source information from members of the news media doing their jobs,” Mr. Coley said in a statement.

He added, “The department strongly values a free press, protecting First Amendment values and is committed to taking all appropriate steps to ensure the independence of journalists.”

Ms. Psaki also emphasized the change in policy.
“While the White House does not intervene in criminal investigations, the issuing of subpoenas for the records of reporters in leak investigations is not consistent with the president’s policy direction to the department, and the Department of Justice has reconfirmed it will not be used moving forward,” she said.

Some good reporting from a former Assistant U.S. attorney:
The NYT Prints Falsehoods to Impugn the Integrity of Career Prosecutor Tapped by Bill Barr for “Leak” Investigations

Investigating leaks of properly classified doesn’t seem unreasonable regardless of who the person doing the is or who the recipient is.

Neither journalists nor members of the Legislative Branch seem especially worthy of a carve out. Heck, some of the committee members and SR Staff have access to items that could seriously damage the US.

Likewise, if a journalist receives a leak of sensitive material and they choose to make that material public then they can go to jail just like anyone else.

There isn’t any martyrdom or heroism unless the likelihood of harm exists. So please spare me any cries about heroic journalism or the bravery of a leaker.

Most likely whomever is doing the leaking is doing it to advance an ideological agenda not out of a sense of patriotic duty or to simply inform their fellow citizens.

Ohhh, going after Democrats Propaganda Ministry agencies not Epoch Times or OAN. If it was conservative news would he be leaving?

“Do you notice anything missing?”
Yes, I do. There’s no mention anywhere that the investigation is continuing into the source of the leaked classified information. The current brouhaha is nothing but the magician’s trick of misdirection. The fallout from the leaks is being used to distract from the leaks and those responsible. What did the subpoenas uncover? Crickets.