“Lo and behold, the single most important issue to them apparently right now is Critical Race Theory. Who knew that was the threat to our Republic?” 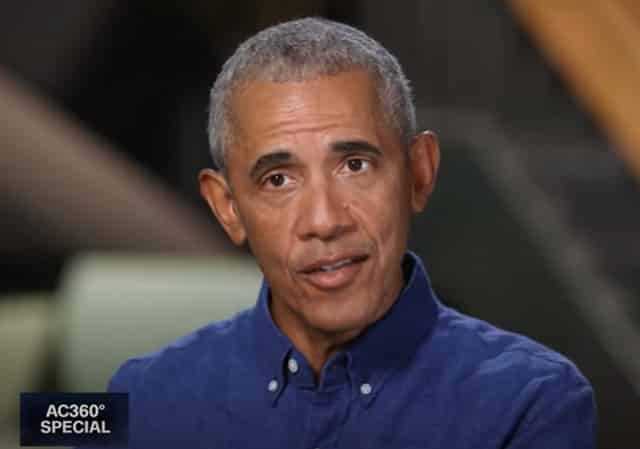 Former President Barack Obama scoffed at concerns about Critical Race Theory in education during an interview with CNN’s Anderson Cooper.

The interview was pure Obama. First, he scolded Republicans for embracing falsehoods about the 2020 election after four solid years of his party pushing the Russia collusion conspiracy theory.

Then Obama criticized “certain right-wing media outlets” for sowing division, an apparent jab at FOX News. Obama has always despised FOX News for not joining the chorus of media praise for him.

Finally, he spoke of racial division in the United States, as if he was an outsider, analyzing the problem.

From Catherine Garcia of The Week, via Yahoo News:

Progress has been made, former President Barack Obama told CNN’s Anderson Cooper, but he finds it’s still hard for the “majority” of white Americans to “recognize you can be proud of this country and its traditions and its history and our forefathers, and yet it is also true that this terrible stuff happened. The vestiges of that linger and continue.”

Obama told Cooper, in an interview broadcast Monday night, that during his time in office, when he “tried to tell that story, oftentimes my political opponents would deliberately not only block out that story but try to exploit it for their own political gain.”…

There are also “certain right-wing media venues, for example, that monetize and capitalize on stoking the fear and resentment of a white population that is witnessing a change in America,” Obama said. The nationalization of media and politics is making it so Americans are occupying “different worlds,” he told Cooper, and when people are this divided, it “becomes that much more difficult for us to hear each other, see each other.

We have more economic stratification and segregation. You combine that with racial stratification and the siloing of the media, so you don’t have just Walter Cronkite delivering the news, but you have 1,000 different venues. All that has contributed to that sense that we don’t have anything in common.”

Here’s the clip where Obama discusses Critical Race Theory. Note how he frames it as something Republicans are wasting time on rather than solving real problems:

.@BarackObama scoffs at suggestion Critical Race Theory is a “threat to our republic”

“There are certain right-wing media venues, for example, that monetize and capitalize on stoking the fear and resentment of a white population that is witnessing a changing America" pic.twitter.com/NVdEOnQJ4r

Christopher Rufo, who has been waging a one-man war against CRT, made a few observations about this:

Obama is being coy, but he knows exactly what critical race theory teaches. In fact, here's a photograph of Obama hugging the founder of critical race theory, Professor Derrick Bell, back when he was a student at Harvard Law. pic.twitter.com/3uYFxtVFlf

Loads of half-truths in Obama’s rhetoric. For example we never had “only Walter Cronkite”, he was always the more leftish of the three channels, on CBS. We watched the Huntley-Brinkley report on NBC. There was also ABC with its newsreader.

Isn’t the ability to “see past each other” called freedom of association? We can choose to engage, or not.

“Loads of half-truths in Obama’s rhetoric.”

Gee, my take is that Obama never exceeded 1/10 proff in anything he said or did.

Rational people understand that combating racism with more racism will only divide the races even further. But, that’s the goal that a race hustler will never admit openly.

Disagree … overall … not a scratch on the D’s …

God, I dislike this man so much

All of them and dear God his wife is a real winner, Ms, first time she ever was proud of America, of course ot had to do with her becoming First Lady
Nothing to do with being gifted an education at Harvard, nothing to do with a quota job at the hospital where she dumped, probably people of color on the streets cause they couldn’t pay
Her racist father and the colorful communist Rev Wrong taught her how to grift and she hasn’t stopped for one minute
Her and that 1/2 White husband of hers…that absolutely hates Whites

They should have listed Michelle, cuz it’s going to go over about as well as her school lunch overhaul.

White privilege? Give me a break. If Obama had been white you would never have heard of him. It was his black privilege that got him where he is today. That a black man could be elected president of the United States is something that he should taught in every school in America as proof that Critical Race Theory is a lie. It was white people who elected a black man president. He should be shouting from the rooftop of the freedoms and rights and privileges that black people have in America.

While he is at it, he could also mention that economic opportunity for blacks was greatest under his successor.

Is there any doubt that black people in America are far better off than their counterparts in Africa?

The composite character race hustler that duped America into believing his performance art speech of 2004.

“He” didn’t dupe anybody – he was surrounded by imagemakers, a TOTALLY corrupt news and entertainment media. He was years in the planning, by Bill Ayers and Obama’s “books” written by Ayers.

Obama was just an actor in a brilliant play – when the production across the street was – ugh – that drunk Boehner and the GOP.

I remember how they tapped Obama to make Bill Clinton’s nomination speech at the convention. I remember thinking, “Who the hell is this guy? I’ve never heard of him.” The next thing that occurred to me is, “This is grooming, just like a New Mousketeer.* We’ll be seeing this guy again — some kingmakers have plans for him.” It was just my cynicism gene, hitting a momentary groove.

*(Disney repeatedly used the Mouseketeers and similar properties to manufacture new child stars on whom they could profit for years.)

Nothing more nauseating than this creep’s face.

Barack Obama then:
“If you like your doctor, you can keep your doctor.”

He’s there to add estrogen.

The race hustler in chief has spoken! What an a-hole.

This character is human excrement.

In other news his wife michelle – commonly referred to as the Wookie – was ok’d to play in the men’s division wrestling division after her recent gender surgery.

She’d probably lose. Too bottom heavy. And too stupid.

Right. Use a man so bitter about the fact that his mother was white and his father was a shoot sperm and run father racist to preach to us about being racist by virtue of our skin color? MLK must be in a state of perpetual spin in the grave to think that 60 years after his civil rights movement, the country of his birth now wants to judge everyone based primarily on the color of their skin and give no consideration to the content of their character!

Why is that a**hole still breathing and wasting oxygen?

This man is the definition of Hypocrisy. A man who used the system to advance himself thru black privilege complaining about resistance to acceptance of a theory (not proven) of white privilege.

Another vile, stinking leftist comes out of the woodwork to defend an actual scheme for “systemic racism.”

The hypocrisy is staggering.

Barack and Michelle have the Obama ‘billion dollar brand’ to protect.
CRT doesn’t help that brand to bring home the bacon.

1. Romney insisting on lowering taxes for top rate earners when Americans had clearly become concerned about the wealth gap

2. Romney did not have a good answer for why not subsidize the purchase of health care to encourage more people to buy health insurance. Republicans still don’t have an answer for that.

3. It could happen again in 2024. I don’t see rustbelt workers pinning for paying 300+ more on health insurance a month in return for Jeff Bezos paying less and spending more on the military.