My column in The Washington Examiner: “America is on the precipice of a fundamentally fragmented educational system — red school districts, blue school districts — that teach very different curricula.” 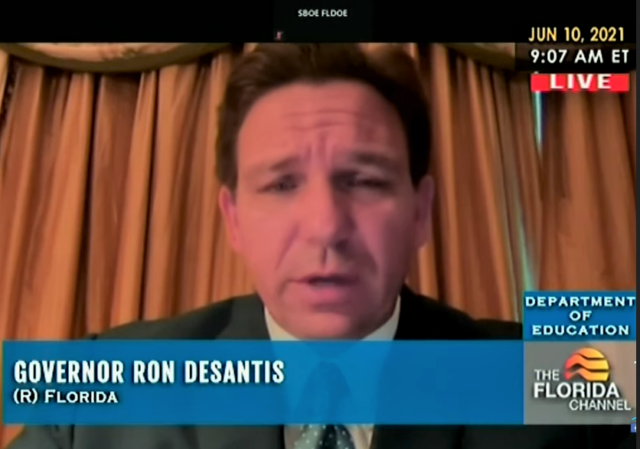 I had a column today at The Washington Examiner, surveying the emerging red-blue divide on Critical Race Theory and its abusive trainings and practices in education, typically using misleading euphemisms like “equity” and “antiracism.”

Here is a short excerpt from Critical race theory school battles are deepening the red-blue divide:

Critical race theory argues that America is a systemically, irredeemably racist country and that everyone must work ceaselessly to deprogram themselves of the racism embedded within them. The concept currently is championed by race scholars-turned-celebrities such as Ibram X. Kendi and the widely debunked 1619 Project’s Nikole Hannah-Jones, but an overwhelming majority of people disapprove of this philosophy’s polarizing racial activism.

Despite its broad unpopularity, critical race theory has found its home in the American education system, with training beginning as young as kindergarten and reaching a crescendo in higher education….

American education, which once strived for a meritocracy without regard to race, has exchanged academic rigor for race-based social engineering. In many places, this shift has been state-sanctioned through public funding. Many states, however, are pursuing legislative and administrative means to stop this. The divide is a stark red-blue one, with Democratic-controlled governments pushing critical race trainings in public schools and other government agencies, while Republican-led states have sought to curb the use of taxpayer funds for such racially divisive purposes.

Most of the column documents what is happening in various states demonstrating this growing divide. Read the whole thing at the link.

With neither side willing to back down, America is on the precipice of a fundamentally fragmented educational system — red school districts, blue school districts — that teach very different curricula.

I am in a blue state and have been working to move to a red state. I haven’t decided which state, but I do thing that a state’s response to CRT is a good indication of the state having merit.

Not a bad decision but we really need is more conservatives in purple states.

Conservatives. American Conservatives: Pro-Life, Liberty, and the pursuit of Happiness, reconciled under a constitutional framework, less the Twilight Amendment, Diversity of individuals, minority of one. Okay… I mean, yes.

They haven’t had enough violent crime yet.

I’ve lived and raised my family in one of the bluest areas of a very blue state, and, thanks to the teacher labor goons, the quality of the public education system has long sucked. Hence, right-of-center parents leave the public schools behind and either homeschool or enroll their children in private schools. This will continue apace.

Very blue state here too.. This past year two grandchildren went full time, regular hours to the early grades of a parochial school, with no CRT. The public schools had about 1/4 the normal class time with a teacher plus what everyone recognizes as worthless virtual learning for young kids. IMO a lot of the public school kids will never catch up.

Blue districts are often those with the worst issues in terms of minority communities. Yet CRT offered by race hustlers in these districts is for privileged whites to assuage their guilt. And the poor oppressed victims of these hateful policies languish. Shame on the hustlers like Kendi and Abrams, among others.

As for neo-racist CRT, even the more affluent parents can see what’s going on, and how this has happened. It may well be the issue that actually gets people to see what has been going on under their noses. Leftist extremists are prone to go too far, and they may have grabbed a tiger by the tail.

We are in a sad, sad state of affairs when a mediocrity named Ibram X. Kendi, aka Ibram Henry Rogers, has influential segments of the greatest and most powerful nation in history convulsed in spasms of self-flaggelation.

Someone needs to take him on mano a mano.

I volunteer Professor William A. Jacobson as that someone.

The professor challenged the entire faculty of Vassar College. And not one of them took him up on the challenge.

I think I can speak for Professor Jacobson when I say, “Professor Kendi, anytime, anywhere, bring it on!”

Who would win a debate on investments and financial planning?

It depends on which news media is doing the reporting.

Patrice Cullors. But that’s another debate.

Likely the race hustler, the one thing they are good at besides creating racial divides is getting unbelievably rich.

Luckily normal people don’t consider wealth a sign of who is right on an issue like CRT.

Kendi is little more than a modern day televangelist with a fast scam and brown skin. A white liberal’s whipping post.

I hate to say it, but if they somehow manage to mandate vaccines then it is time that Red states and Blue states polarize, completely. If they get drunk on the power that they can mandate vaccines in Blue states, they can bar entry of citizens from other states without vaccine passports.

Also, how long after they realize they can mandate vaccines will they get the ideas that people are in no position to resist their guns being taken either? How will Americans resist their guns being taken if they are spread throughout Blue areas? They can methodically take them. It might be soon coming time to geographically segregate in case they try anything. Otherwise, we may find ourselves powerless in the face of the coming resolution of the stark political divide in this country.

“If they get drunk on the power that they can mandate vaccines in Blue states, they can bar entry of citizens from other states without vaccine passports.”

Nope, pretty sure there’s a buttload of legal precedent saying they can’t, starting with the very replacement of the Articles of Confederation with the Constitution. Unless “they” are the feds.

Rabbis Drag Pelosi Over the Coals for ‘Acceptance of Bigotry and Abdication of Leadership’:
https://pjmedia.com/news-and-politics/tyler-o-neil/2021/06/17/rabbis-pelosi-has-abetted-anti-semitic-violence-by-standing-with-ilhan-omar-n1455377

‘This is Scary Stuff’: Texas Republican Turns Up the Heat on the FBI Over January 6th:
https://beckernews.com/this-is-scary-stuff-texas-republican-turns-up-the-heat-on-the-fbi-over-january-6th-39784/

Does the term distinction without a difference mean anything to you?

Increasingly the real divide between Red and Blue is that the Left is demanding that they be allowed to redefine reality. They claim to be the party of science and yet they claim there are more than two genders, that global warming is destroying the world, that we must still wear masks even though the pandemic is over and masks accomplish nothing, etc. They redefine words so that the meanings of documents are changed which then allows them to rewrite history into their meaning. The list goes on.

In the old days we called them paranoid schizophrenics, but today we call them Democrats or Leftists.

Or Maoists or Leninists or communists.

You mean that you have just come to this conclusion? Of course it is a red/blue issue. So is illegal immigration (excuse me, undocumented invasion). So are many things.

Let’s admit that we cannot have a “one nation” whether under God or not with the blue states. Let’s get the public out of education. This whole leftist takeover has given them untoward power and it needs to be stopped.

William Jacobson: Critical race theory argues that America is a systemically, irredeemably racist country and that everyone must work ceaselessly to deprogram themselves of the racism embedded within them.

About half. America exhibits systemic racism, but that is not all that America is. Nor does critical race theory argue that America is irredeemably racist, but that systemic problems can be addressed only after they are acknowledged.

How do we know slavery’s legacy still shapes American life? Because your own citation says so:

In fact, the harshness of the Wilentz letter may obscure the extent to which its authors and the creators of the 1619 Project share a broad historical vision. Both sides agree, as many of the project’s right-wing critics do not, that slavery’s legacy still shapes American life—an argument that is less radical than it may appear at first glance. If you think anti-black racism still shapes American society, then you are in agreement with the thrust of the 1619 Project, though not necessarily with all of its individual arguments.
https://www.theatlantic.com/ideas/archive/2019/12/historians-clash-1619-project/604093/
{emphasis added}