“The woke class wants to teach kids to hate each other, rather than teaching them how to read, but we will not let them bring nonsense ideology into Florida’s schools,” said Governor Ron DeSantis. 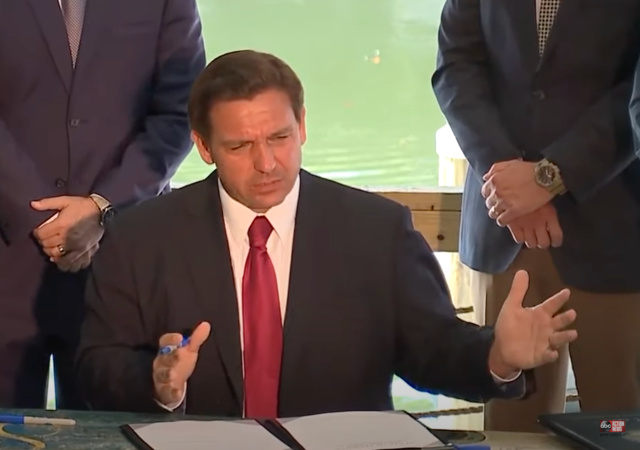 On Thursday, June 10, Governor Ron DeSantis joined the Florida Board of Education to announce new teaching standards banning elements of Critical Race Theory (CRT) in the state’s public schools. In a unanimous 8-0 vote, the Board of Education adopted a rule change that says, in part, “instruction on the required topics must be factual and objective, and may not suppress or distort significant historical events.”

DeSantis issued a press release highlighting his remarks at the event, held in Jacksonville:

Today, Governor DeSantis joined the State Board of Education Meeting to discuss the importance of maintaining the integrity of Florida’s academic standards by keeping Critical Race Theory out of the classroom.

“The woke class wants to teach kids to hate each other, rather than teaching them how to read, but we will not let them bring nonsense ideology into Florida’s schools,” said Governor Ron DeSantis. “As the Governor of Florida, I love this state, and I love my country. I find it unthinkable that there are other people in positions of leadership in the federal government who believe that we should teach kids to hate our country. We will not stand for it here in Florida. I’m proud that we are taking action today to ensure our state continues to have the greatest educational system in the nation.”

(3) As provided in Section 1003.42(2), F.S., members of instructional staff in public schools must teach the required instruction topics efficiently and faithfully, using materials that meet the highest standards of professionalism and historical accuracy.

(a) Efficient and faithful teaching of the required topics must be consistent with the Next Generation Sunshine State Standards and the Benchmarks for Excellent Student Thinking (B.E.S.T.) Standards.

(b) Instruction on the required topics must be factual and objective, and may not suppress or distort significant historical events, such as the Holocaust, and may not define American history as something other than the creation of a new nation based largely on universal principles stated in the Declaration of Independence.

(c) Efficient and faithful teaching further means that any discussion is appropriate for the age and maturity level of the students, and teachers serve as facilitators for student discussion and do not share their personal views or attempt to indoctrinate or persuade students to a particular point of view that is inconsistent with the Next Generation Sunshine State Standards and the Benchmarks for Excellent Student Thinking (B.E.S.T.) Standards. [emphasis added]

According to local media reports, teachers unions in Florida objected to the change. The Florida Educators Association (FEA) specifically objected to the ban on indoctrination. The FEA asked that section 3(b) read:

Instruction on the required topics must be factual and objective, and may not suppress or distort significant historical events, such as the Holocaust, slavery, the Civil War and Reconstruction, Jim Crow, the civil rights movement, the Trail of Tears and contributions of African Americans, Hispanic people and women to our United States. The study of American History must include discussions of the principles outlined in the Declaration of Independence, the U.S. Constitution, the Bill of Rights and subsequent amendments that reflect a more diverse America than are represented in our founding documents.

Just yesterday, @FloridaEA, the state’s largest teacher’s union, said the new guideline “falls short” and that it “appears to have a political, rather than educational, motive…” Union offered an alternative version: pic.twitter.com/fs4gVtjeVv

The meeting of the Board of Education was disrupted, causing a delay in the vote on the rule change.

Meeting is breaking for five minutes to restore order after opponents started chanting “allow teachers to teach the truth!” pic.twitter.com/5g92lz4Z4V

The new rule takes effect 34 days after today’s meeting, meaning it will apply starting for the fall semester.

A small victory for common sense.

This type of leadership is sorely needed right now. People need to see other standing up to this woke poison, so that they will feel emboldened to take a stand themselves. The more I see of Ron DeSantis, the more I like him.

If only every state in America had as sane a Governor as Ron DeSantis. Second only to having our duly elected President Donald Trump where he belongs, in The Oval Office. Drive out that ~fool~ that displays painfully obvious dementia and that do nothing, air-headed ~tool~ that thinks she is Vice President.

Do we need competency tests for those in high office of our government, along with Minnesota Multiple Personality tests?

“Do we need competency tests for those in high office of our government, along with Minnesota Multiple Personality tests?”

I also think that we need a minimum IQ standard for people to hold office. Currently, we have far too many truely stupid people holding office.

lol. The dumb left sete ‘em up, and DeSantis knocks ‘em down.

The more publicity he generates for this only brightens his star and exposes these frauds for what they are.

Critical Race Theory: There is no theory in CRT. It is 100% propaganda. That’s why Florida doesn’t want it.

But will it be enforced/enforceable? You can’t fire any of the teachers or staff involved, after all, and they know it.

I suspect it will be meaningless, like the covid measures ban DeSantis signed. It doesn’t protect you from your employer telling you “take the mRNA vaccine or be fired”, and it doesn’t stop doctors and hospitals from requiring you to take the mRNA vaccines as a condition of rendering health care.

Desantis is doing everything Trump did, but DeSantis does it with the common sense to NOT offend people in the process. If only Trump could have kept his mouth shut more often!

For the most part, people who were offended were experts about being offended. I really enjoyed Trunp jerking their chains.

Fines for violation should be levied against both organizations and individuals.

There should also be civil liability, with minimum statutory damages, similar to copyrights., say $150,000 per person, incident. If an administrator directs teachers to do this, they should be personally liable for damages.

I am hoping that the next step will be enforcement and ability for parents to report schools/school districts in violation, but this is a wonderful start.

Public schools will do it anyway. I think people would be shocked at how far left education in this country has gotten.