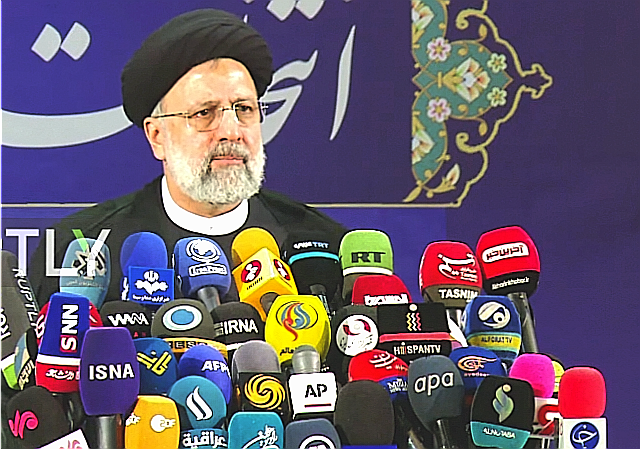 President Joe Biden’s administration is pressing ahead to restore the Iran nuclear deal a day after regime-favored candidate Ebrahim Raisi was declared the winner of the Friday’s sham presidential election.

Zarif “says there is a ‘good possibility’ for an agreement in Vienna talks before end of current administration’s tenure” before August, the Qatari state-funded broadcaster Al Jazeera reported.

Earlier this month, the Iranian foreign ministry spokesman disclosed that a “broad agreement” had been reached with the Biden administration on lifting of sanctions on Tehran, a pre-condition set by the Mullahs for reentering the 2015 nuclear deal.

Parties negotiating a revival of the Iran nuclear deal will hold a formal meeting in Vienna on Sunday, the European Union said on Saturday.

Iran and six world powers have been negotiating in Vienna since April to work out steps for Washington and Tehran to take. The United States withdrew in 2018 from the pact, under which Iran accepted curbs on its nuclear programme in exchange for a lifting of many foreign sanctions against it.

Sunday’s formal meeting comes more than a week after this round of talks resumed and is an indication that the talks are likely to be adjourned.

Officials over the week have indicated that differences remain on key issues.

“The Joint Commission of #JCPOA will meet on Sunday, June 20,” Mikhail Ulyanov Russia’s envoy to the talks said on Twitter.

“It will decide on the way ahead at the #ViennaTalks. An agreement on restoration of the nuclear deal is within reach but is not finalised yet.”

Even before a deal can be reached, the Biden White House has begun lifting Trump-era economic sanctions on the Shia-Islamist regime. “U.S. Lifts Some Iran Sanctions Amid Stalled Nuclear Talks,” The Wall Street Journal reported on June 10. This is the latest rollback in a series of concessions made by President Biden to cajole the Iranians into reentering the deal. He has already rescinded, much to the delight of the Russian and Chinese, former President Donald Trump’s imposition of U.N. sanctions and a weapons embargo on the regime.

The mainstream media cheered the prospect of a nuclear deal after Tehran declared its preferred candidate the winner in the presidential election. “Iranian Hard-liner May Be Best Path to Restoring Nuclear Deal,” The New York Times declared. Raisi’s coming to power is “likely to unlock talks in Vienna on the terms for Washington’s return to the nuclear deal,” the leftwing UK daily Guardian agreed on Saturday.

The mainstream media outlets were not alone in welcoming Raisi’s presidency. Iran-sponsored Palestinian terrorist groups were among the first to congratulate their new paymaster. “We ask God [Allah] to grant him success,” a spokesman for the Gaza-based Islamic terrorist group Hamas said. “Once again the people of Iran have reiterated their commitment to the path of revolution and its regime,” the Palestinian Islamic Jihad declared.

At this point I feel like the only question is who gets nuked first – Israel, or if they pre-emptively nuke Iran before they finish the bomb.

Because it should be obvious at this point that Democrats have ABSOLUTELY NO INTEREST in doing a goddamn thing to stop Iran.

That is about it. My nickel is on Israel taking matters in hand but now that Ben is on the sidelines for a bit…….hard to say.

It’s a lot worse than the democrat not having an ‘interest’ in stopping Iran. The opposite is true: the democrat party (and some of the GOP) is in the pockets of Xi Jinping-pong.

Being they are owned by the Red Chinese – and now that the Red Chinese have invested 400 billion into Iran, Iran has become the new North Korea to do Red China’s bidding and intimidation.

Biden is not merely a fool, he’s a bought and paid for traitor.

The question is how he’s getting paid. Side deal with Hunter? A sudden massive increase in contributions by Muslim groups to some campaign or charity?

I’d say the $1.5 billion they paid his crackhead covers that easily.

Considering how our election went last November, I’d call this a “birds of a feather” moment.

Establishment Types in both Parties admire those who can pull the wool over people’s eyes. In their view – the people are to be ruled.

Also, just like Iran we are moving toward a religious state. The religion of Wokeism. Where everyone must be indoctrinated and parrot the party line.

The ‘religion’, like all fascist regiemes, will be the idolization of one person.

Look for the left to find their new ‘obama.’ He worked out good for a while, but he was too dumb and lazy.

Damn glasses messed up again, sorry about downvote, meant the opposite.

And it doesn’t help that once clicked it can’t be rescinded — one of Disqus’ few advantages over this system.

No harm, no foul.

Meanwhile, Iran has been cranking out enriched uranium from their underground facilities ever since and before the Obama Iranian nuclear deal. The Trump sanctions put a kink in their plans. Biden is opening up the pipeline wide. Guess which president the press will blame when Iran sets off its first nuke?

Only a fool would attempt to reopen the Nuclear Agreement with Iran,
and Joe Biden seems to be that fool.