What scares the media and Democrats the most is that a multi-racial, multi-ethnic coalition is rising up against leftist racialization of everything.

Want to know why the media is in a frenzy pretending that Critical Race Theory is just some loopy law professor thing, that it’s not in elementary and secondary schools, that it’s just ginned up drama astroturf?

It’s because the opposition to CRT is the opposite of how David Brock’s Media Matters propagandists and corporate media portray it.

It’s a bubbling up of disgust over the racialization of children’s educations, of the workplace, of government. Contrary to the claims that the U.S. is systemically racist, the U.S. is systemically not racist — racial hatred is relegated to the fringes of society, so academics, teachers unions, and leftists need to invent it by setting children against each other based on skin color, by teaching children that the most important aspect of society is skin color.

They enlist has-beens whose livelihoods and careers depend on the good graces of liberal media, like S.E. Cupp, to announce that opposition to CRT is McCarthyism and hallucination.

The opposition is growing, and the media demonization is failing.

In a memo sent to members of the Republican Study Committee, its chair Rep. Jim Banks of Indiana said the “backlash against Critical Race Theory is real.” Banks framed the GOP’s opposition to the ideology “as an effort to renew American patriotism and rebuild our country.”

A just-released Harvard/Harris poll reflects what we are seeing on the ground (via Washington Examiner):

And despite liberal media efforts to dismiss the debates in school districts around the country over the teaching of critical race theory, the poll found that it too was a hot issue.

“On schooling and education, another sleeper issue, 61% do not believe students should be taught that America is structurally racist and is dominated by white supremacy,” said Penn in his email. 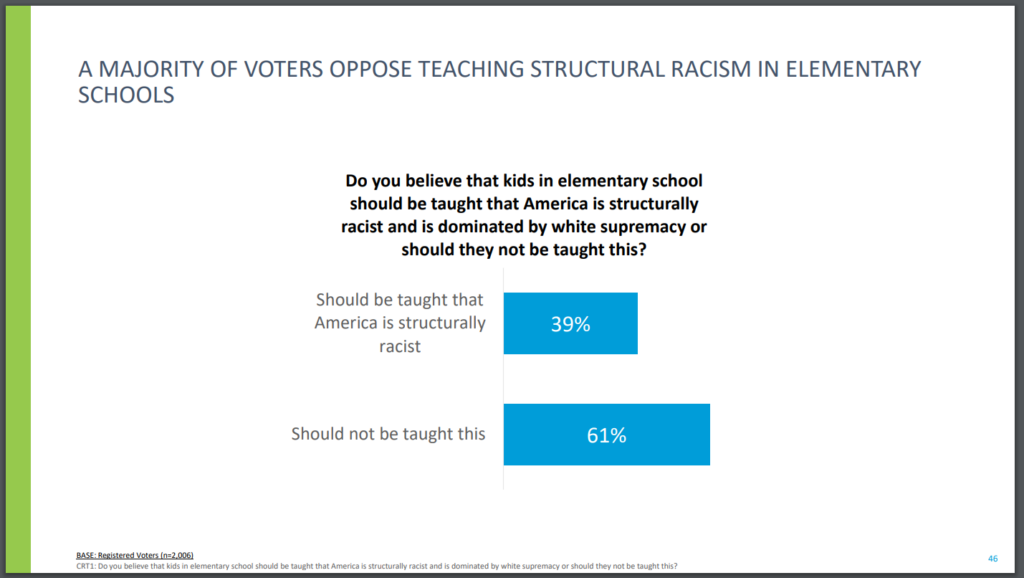 Rather than CRT racial claptrap, a strong majority want their elementary school children taught the importance of freedom of speech: 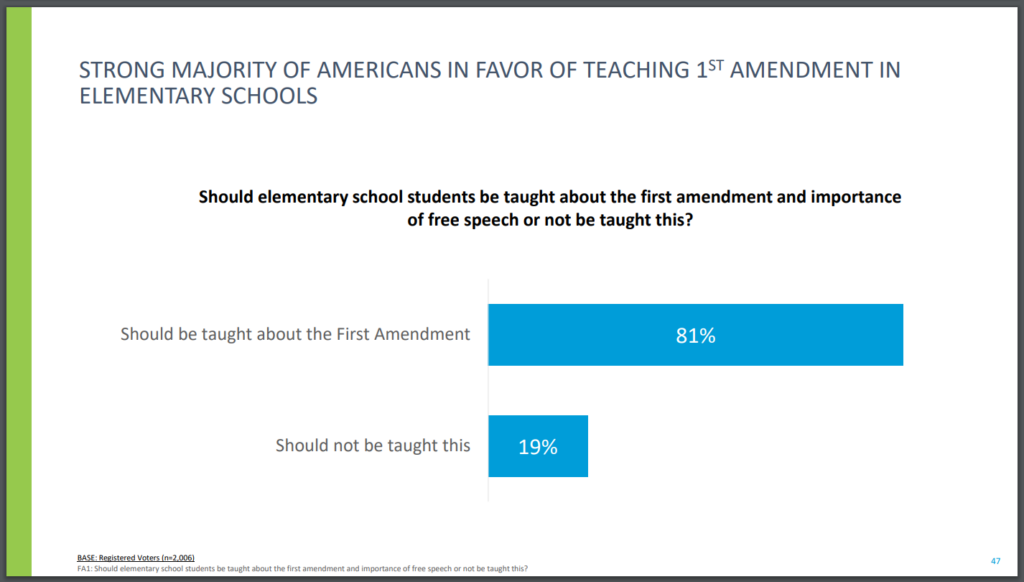 Even the NY Times admits to the growing disconnect between (mostly) white liberal progressives and the non-whites they purport to want to help:

Can progressives win broad numbers of the Black and brown voters they say their policies will benefit most?

That provocative question is one that a lot of Democrats find themselves asking after seeing the early results from New York City’s mayoral primary this past week….

His appeal adds evidence to an emerging trend in Democratic politics: a disconnect between progressive activists and the rank-and-file Black and Latino voters who they say have the most to gain from their agenda. As liberal activists orient their policies to combat white supremacy and call for racial justice, progressives are finding that many voters of color seem to think about the issues quite a bit differently….

But a growing body of evidence indicates that large numbers of Black and Latino voters may simply take a more centrist view on the very issues — race and criminal justice — that progressives assumed would rally voters of color to their side.

What scares the media and Democrats the most is that a multi-racial, multi-ethnic coalition is rising up against leftist racialization of everything. They will pull out all the dirty tricks in their playbook to try to stop it.

Yeah- that is scary.

There is a backlash coming.

And the people are pissed.

If we can’t overtake in one of those two national elections then our country is doomed to idiocy and degeneration into a third world shithole.

I don’t think every day people care much about the news. They just watch what is happening in their lives and vote accordingly. It’s one reason why the momentum keeps swinging back and forth…because one party gets in, screws things up for enough people to sway the center, and the next party gets in power, then the cycle repeats.

Keep in mind that 2020 was stolen and nothing was done to prevent 2022 from the same. Then what do the pissed people do?

Who counts the votes?

The extremists are trying to say that the whole foundation and structure of the USA is about racism.

Yes, they allege that diversity (e.g. racism, sexism, ageism) is structural, but this is not the Progressive nation of South Africa, where diversity, inequity, and exclusion is proudly founded in the design of their nation and constitution.

This CRT/Equity and ‘white’ privilege framework is a sinking ship. This ideology was adopted by wealthy progressive because it allows them to seek personal indulgences via their support. The ideology then offers them a protected perch for them to project their own bias, prejudice, guilt and shame upon others.

No question there is privilege. That privileged group isn’t exclusively ‘white’ nor is it large. It is compact, exclusive and protected with very narrow gates of entry for those not born to it’s membership.

In other words: class privilege; but, we must be wary that diversity [dogma] is a class-based bigotry, and be discerning and consistent (i.e. lose our Pro-Choice religion) when mitigating its progress.

What I mean by privilege is membership within the elite who possess the power to create and enforce policy or due to wealth, social status or position are insulated from the impact of those policies.

Membership within the elite doesn’t make one good or evil or neutral. The membership is power. Power is simply another tool. How that tool is used determines our perception of the usage.

The older I get, the less I understand the language. But I know right from wrong and I can judge actions.

My 1st thought when I visit eastern KY is “look at all that privilege”. 🙄

To borrow and edit lyrics from James Brown, “Say it now, I’m white and I’m proud!”

And this is from a poll almost certainly oversampled Dems. Quite a bit.

This is from a poll that gives Comrade Biden a 59% approval rating.

This survey was conducted online within the United States from Field Dates: June 15-17, 2021 among 2,006 registered voters by The Harris Poll.

Results were weighted for age within gender, region, race/ethnicity, marital status, household size, income, employment, education, political party, and political ideology where necessary to align them with their actual proportions in the population. Propensity score weighting was also used to adjust for respondents’ propensity to be online.

What scares the media and Democrats a whole lot is that “oppressed” non-whites have brains that they can use and do use to think for themselves.

And, in America now, Asian women on average earn more than white men.

How’s that for a racist patriarchy? Asians outperforming whites in income, education, home ownership, etc., really throws sand into the CRT gears. That’s why CRT zealots focus on a woefully outdated white/black paradigm. They go to great lengths to ignore all the diverse Asian groups in America who are outperforming White Americans. It completely debunks their wacky “theory.”

For years I have thought that young white men were the group that both needed and could benefit from help. Examples:
– When was the last time you saw them in home building and maintenance related work – almost all Hispanics now.
– Auto repair, a typical occupation for high school educated kids, needs far fewer these days.
– Females graduate from college at nearly 50% more than males.
Is the future for many limited to the military or Amazon distribution warehouses?

Meanwhile, the indoctrination of children continues apace. Saw this just tonight on a trip to Walmart: https://www.crayola.com/product-feature/colors-of-the-world

Gotta brainwash the kiddos into seeing skin color as THE definitive characteristic of individuals.

As a kid, I would have absolutely LOVED this crayon set. Sad that it took so long for Crayola to realize they could make a profit with it.

The statement is misleading or taken out of context. The survey answer only concerned elementary school students. It should go without saying that many parents may believe more difficult issues about race may be appropriate at higher grade levels.

About the headline not specifying elementary school, ok fair enough.

Difficult issues? That seems imprecise. I know that in my public HS I was taught the good, the bad and the ugly of our US History. In particular our Nation’s journey to fulfill the aspirations and promise of our founding documents: that all men are created equal and must be equal before the law. That day took too damn long but it did arrive and prior to my birth in 1970.